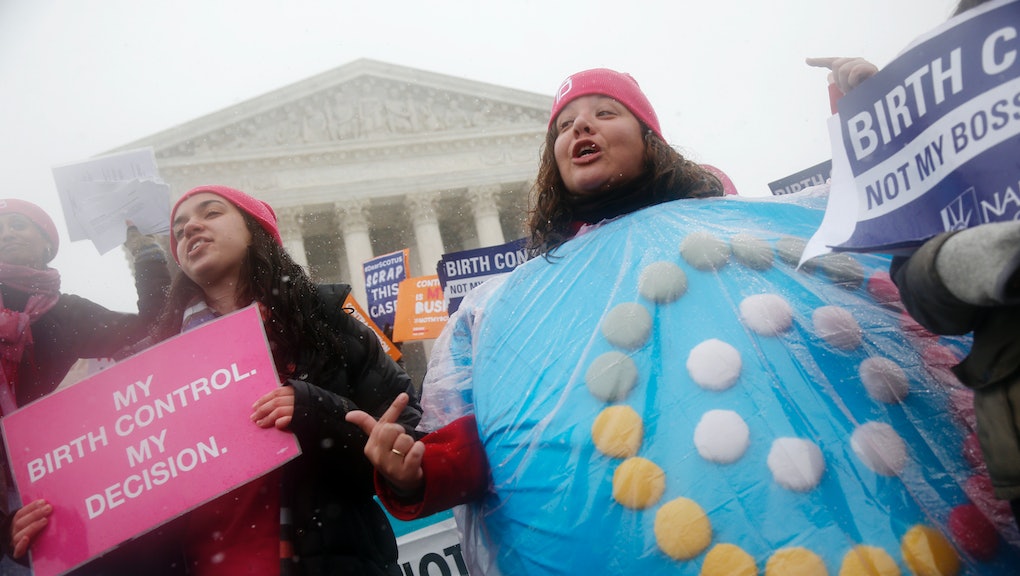 Although Roe v. Wade legalized abortion more than 40 years ago, far too many women still effectively live in a pre-Roe era. There have been 282 abortion restrictions enacted in the United States since 2010, 51 of them in the first half of 2015 alone, according to the Guttmacher Institute. In addition to increased legislative attacks, plenty of politicians and other organizations made their desire to curb women's reproductive rights well-known — and it seems this opposition will hardly abate in 2016.

Continued attacks on women's access and rights. In 2015, Planned Parenthood became particularly embroiled in, and emblematic of, the battle over reproductive rights in the United States. In addition to the Senate and state-specific attempts to eliminate its funding, the organization faced myriad threats in 2015, including false allegations made in a series of sting videos and attacks both political and violent — all despite the fact that, according to a Washington Post report, 97% of its services are unrelated to abortion.

And the war is far from over. While many women, particularly those in marginalized communities, welcomed the Affordable Care Act's providing of reimbursements for care received at Planned Parenthood, one of Congress' first acts of the new year, however, will be to try to eliminate those very funds.

"In one of our first acts of the new year, the House will vote on a bill that would eliminate key parts of Obamacare and stop taxpayer funding for abortion providers such as Planned Parenthood," Rep. Vicky Hartzler (R-Mo.), said in a video released Saturday, according to CBS News. Specifically, she added, the legislation will place a "moratorium on taxpayer funding to abortion providers" for a year.

But legislators' attempts to restrict access to such organizations fails to recognize the effects that doing so has on individual women's lives — especially women who are already disadvantaged. For example, 20 million women needed publicly funded contraception — such as the free birth control Planned Parenthood provides — in 2013 alone, according to a Guttmacher Institute report, in no small part because they made an income below 250% of the federal poverty level or were younger than 20. In fact, another 2009 Guttmacher Institute report found that organizations like Planned Parenthood are the primary health care provider for many low-income women in the United States.

The horrifying effects of increasingly limited access to such services are already apparent. For example, a 31-year-old woman was charged with first-degree attempted murder in December, after trying to perform a coat-hanger abortion. Another woman was convicted of feticide in February, after a similar attempt at self-induced abortion, RH Reality Check reported. And they're not the only ones: As many as 240,000 Texan women may have attempted to self-induce an abortion, according to one recent study.

But there are empowering developments, too. Despite the overarching threat of a return to a pre-Roe era reproductive rights landscape, some hopeful measures will go into effect in 2016. For example, birth control is now directly provided by pharmacists to residents of Oregon — and California will follow suit in the upcoming months, according to Jezebel. This state-specific access is provided in addition to the Affordable Care Act's requirement that women's health insurers provide them with free birth control.

It seems 2016 may also welcome a more complex and comprehensive conversation women's health. For example, the U.S. Department of Health and Human Services proposed legislation that would empower transgender individuals to more effectively fight the discrimination they face when it comes to health care. Studies have shown that the majority of medical schools do, in fact, fail to incorporate LGBT health issues and care into their curriculum. And according to one 2011 study, 28% of trans individuals had been harassed in a medical setting, 26% physically assaulted in at least one health care facility and 19% refused care outright because of their identity.

While the exact measures of legislators and other individuals seeking to curb women's reproductive rights remain unknown, one thing is clear: Americans must remain vigilant and vocal to ensure they not only maintain existing rights, but also advocate for further advancements, too.