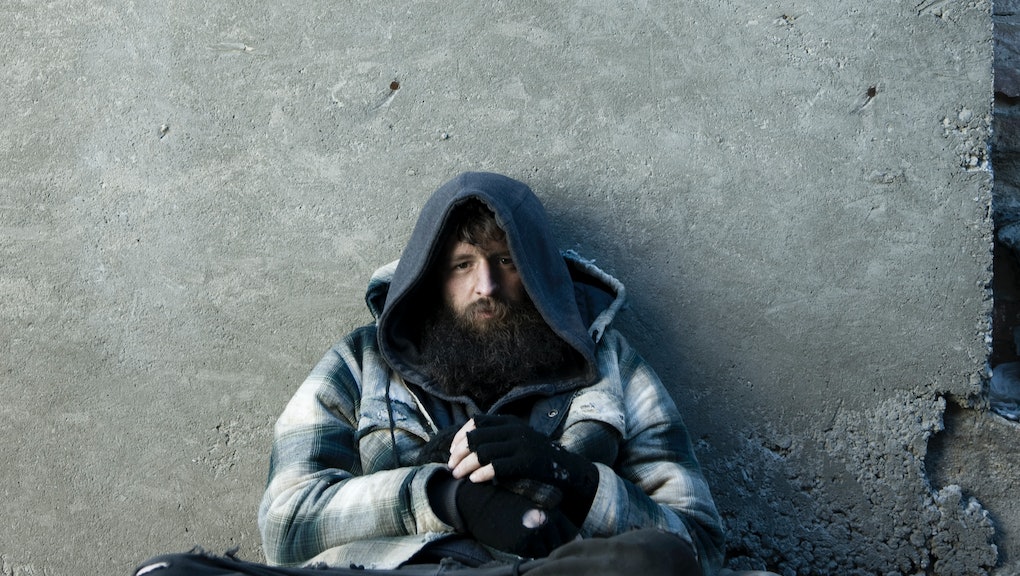 The governor of New York has decided that he will defend the homeless people of his state from dangerously cold weather by any means necessary — including, in some situations, forcing them to into shelters against their will.

Democratic Gov. Andrew Cuomo signed an executive order Sunday which mandates social service agencies and police departments across the state to take homeless people off of the streets when temperatures hit freezing or below — "against their will if necessary," according to Reuters.

Cuomo described the new law as a kind of New Year's resolution for the state.

"It's about love. It's about compassion. It's about helping one another and basic human decency," Cuomo said in an interview with NY1. "Our state, which has a beautiful tradition of social progress and community, should not leave anyone outside in freezing temperatures. That's called basic humanity."

In 2015, close to 90,000 people in New York state were homeless on a given night in January, the largest increase from the previous year out of any state in the nation. The vast majority of the state's homeless population inhabits New York City, where, as of October, about 60,000 people were staying in shelters each night, according to the Coalition for the Homeless.

New York City is raising questions over how to execute this new requirement. Democratic Mayor Bill de Blasio has struggled to deal with a rise in the city's homeless population and has endured sustained criticism for the speed with which he has responded to the growing crisis.

The main issue at hand is the legality of compelling people into shelters without their consent.

"We support the intent of the executive order, but to forcibly remove all homeless individuals in freezing weather as the governor has ordered, will require him to pass state law," a spokeswoman for de Blasio told the Wall Street Journal on Sunday.

The gap between Cuomo and de Blasio, who are both Democrats but have a deeply fraught relationship, is prompting a debate among legal and policy experts on homelessness in the state.

The New York Times consulted a civil rights lawyer who pushed back against a similar measure attempted in New York City in the 1980s, and he expressed skepticism regarding the new order.

"The fact that it is below 32 degrees does not give the government permission to take someone off the street," Norman Siegel told the Times. "If they do a dragnet, then we'll have serious legal and policy problems."

According to the Times, the Cuomo administration said that they expect compulsory removal from the streets only for people who aren't mentally competent. "Obviously, the order does not mandate involuntary commitment for competent individuals," Alphonso B. David, Cuomo's chief counsel, told the Times.

That distinction doesn't seem so obvious to most people interpreting Cuomo's own description of his executive order, which seems to require a clean sweep of any street in the state.

Regardless of how the shelter policy plays out, it is ultimately a short-term measure. The most effective proven policy for dealing with the heart of chronic homelessness is providing supportive housing. In November, de Blasio committed to building 15,000 new units of supportive housing for the homeless at a cost of about $2.6 billion. While smart policy, given the size of the homeless population and the pace of execution (it will take 15 years to fully implement), it's too little, and too slow. In the meantime, the cost of rent across the city is likely to continue soar at breakneck pace.