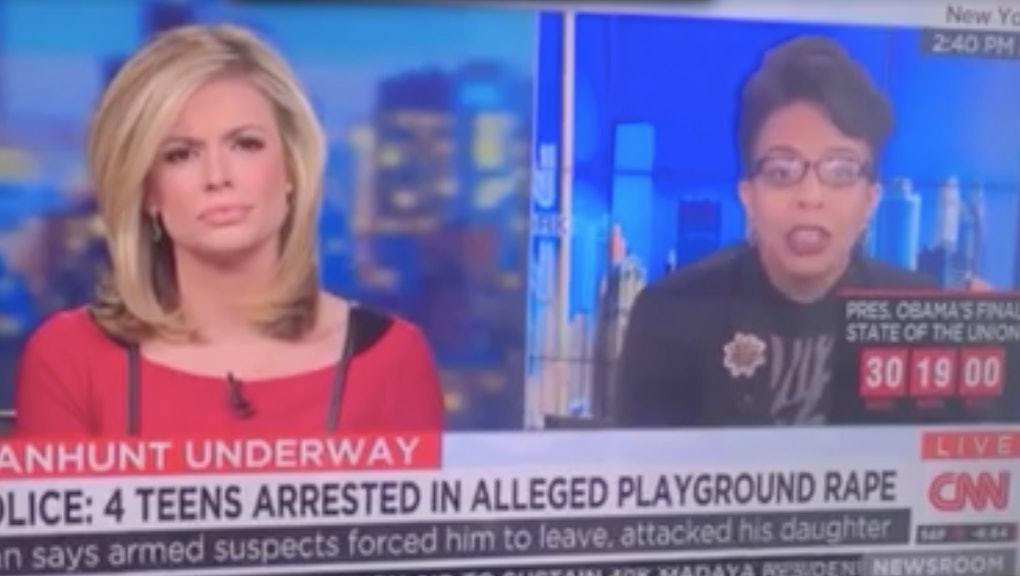 After reports began to circulate last week of a gruesome gang rape in the Brownsville neighborhood of Brooklyn, New York, people started asking the usual questions about the woman at the center of the attack: Was she drunk? Was she violent? Did she say or do anything to provoke the attack? Does she have a history of "promiscuity"?

As New York City Councilwoman Laurie Cumbo sees it, all of these questions are code for 'How can we blame this woman for the act of violence committed against her?' So in a recent appearance on CNN, Cumbo didn't just call out the victim-blaming language people are using to describe the case — she completely shut it down.

Speaking live with anchor Pamela Brown on Wednesday, the councilwoman highlighted the public's tendency to respond to rape and sexual assault cases with questions about victims' behavior, calling the typical reaction to violence against women "not appropriate."

Like clockwork, Brown immediately fell into the trap of blaming the victim, asking Cumbo for more information about the woman's behavior the night of the alleged attack. "Law enforcement sources have told CNN that this alleged victim in this case was drunk, combative and bit a police officer and that she initially refused treatment," Brown said. "What can you tell us about that?"

Cumbo responded, without missing a beat:

Cumbo's response reiterates what anti-sexual assault activists have been saying for a long time, evidently to no avail: The only people responsible for rape are rapists, not victims. Regardless of what they wear or how much they've had to drink, where they were walking or how many sexual partners they've had, women (and men, for that matter) are never "asking for it." Victims of sexual assault are called "victims" because perpetrators commit criminal acts of violence against them, the same reason victims of burglary, battery and murder are called the same thing.

As Cumbo went on to tell Brown, victim-blaming tends to go hand-in-hand with other cultural ills — specifically, institutional racism and classism — in giving perpetrators the sense that they can act with impunity.

"A lot of it is neglect," she said. "[The alleged rapists are] thinking that because they're black, she's black, her father is black, that no one really cares what we do in this community. There will be no repercussions."

But racism and cultural neglect of poor communities aren't the only types of ignorance that contribute to rape culture. Our willingness to blame victims and protect rapists also allows affluent college students and star athletes to commit assault with the sense that they might just get away with it.

Cumbo is saying otherwise. Before signing off, she made one final point about violence against women, a guide to change the way we think and talk about rape.

"We're discussing this matter," she said, "because we want to let individuals know: Whether you are on the Upper East Side or in Brownsville, all women matter — and we're here to make sure that message is sent loud and clear."

Watch Cumbo and Brown's exchange, posted by Ben Pall, below: