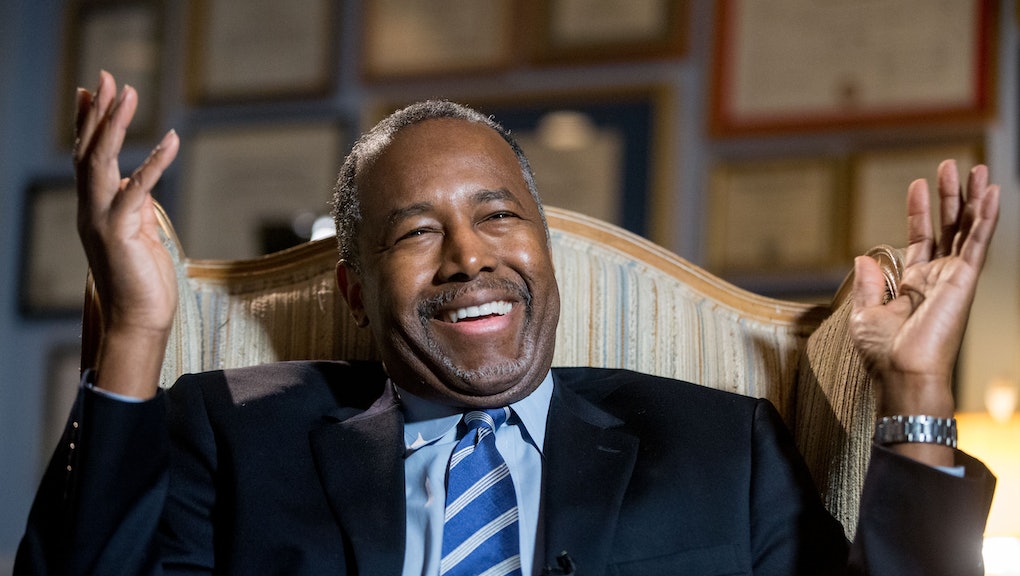 As former neurosurgeon and presidential hopeful Dr. Ben Carson continues to plummet in the presidential polls, he exclusively announced his flat-tax plan in an interview with Fox News on Monday, the Washington Post reported, which is essentially a more concrete version of the Bible-based flat tax he's preached for months. The plan comes after two of Carson's top aides resigned over alleged tensions with one of Carson's advisers.

Under Carson's plan, individual and corporate tax would be a flat 14.9% and would eliminate deductions and loopholes, the GOP candidate told Fox News. He mentioned that those below the poverty threshold would pay less to "move people upward," but didn't specify how much, according to the Post.

Carson's tax plan is congruent with the flat-tax policy he's supported for months and has said on multiple occasions, including to Fox News in May, that he adopted from the Bible's tithing, a religious policy that everyone should donate 10% of their earnings to the church.

"Well, I like the idea of a proportional tax," he told Fox News' Chris Wallace in May. "That way you pay according to your ability. And I got that idea, quite frankly, from the Bible, tithing. You make $10 billion a year, you pay $1 billion. You make $10 a year, you pay $1. You get the same rights. That's pretty darn fair, if you ask me."

The plan would reduce individual taxes for most income brackets — but the wealthiest households, currently taxed at 39.6%, would get the biggest break. A family of four would pay virtually no taxes for the first $36,375 of their income, the Wall Street Journal reported.

"My overarching goal for tax policy is that it should raise revenue – not redistribute wealth, micromanage free citizens or intrude on privacy," Carson said in a statement, according to the Journal. "By applying one single rate to every form of income at its source, my plan does not allow income to escape taxation or be hidden from view. Americans will no longer be pitted against one another or stratified into increasingly punitive tax brackets."

Carson also discussed on the resignation of his two aides during the Fox News interview, alleging that they failed to adjust to campaign changes. "When things are not working you have to analyze them very carefully and you have to be willing to make changes," Carson told Fox News of his campaign manager, Barry Bennett, and his director of communications, Doug Watts, resigning Thursday. "There were a few people who couldn't live with those changes and we gave them an opportunity to resign," Carson said.

Carson was once GOP frontrunner Donald Trump's top challenger in the political polls, and even topped him in a few polls in 2015 before his numbers rapidly declined. Carson went from polling at 22% in an October CNN poll to 10% in the most recent CNN poll.