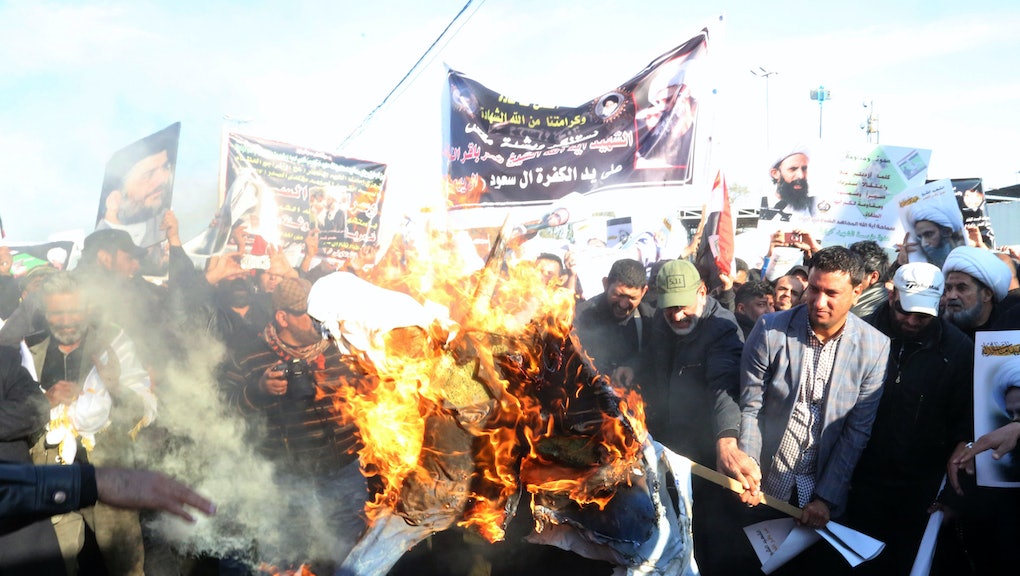 As the Saudi Arabia-Iran Beef Reaches a Fever Pitch, Here's What You Need to Know

Tensions between Saudi Arabia and Iran continue to spiral out of control. On Sunday, Iranians stormed the Saudi embassy in Tehran. On Monday morning, Saudi Arabia officially canceled all Iran-bound flights.

With so many different actors and multifarious competing interests, it can be hard to keep track of exactly how and why this is unfolding. We've got you covered.

How it all began: The first and most important thing to know here is that Saudi Arabia is a Sunni country and Iran is Shia — historically warring sects of Islam.

On Saturday, the Saudi Arabian government executed 47 people, one of whom was Sheikh Nimr al-Nimr. He was much revered amongst Shia Muslims — so much so that experts doubted he'd actually be executed due to the resulting fallout that would ensue.

"Nimr had become a household name amongst Shiite Muslims around the world. Many had thought his execution would be a red line and would further inflame sectarian tensions," Toby Matthiesen, a Saudi specialist at the University of Oxford, told the Washington Post. "So this will complicate a whole range of issues, from the Syrian crisis to Yemen."

As predicted, Shiites across the world reacted poorly. Tensions between Iran and Saudi Arabia swelled.

The details: The 47 slain were executed for terrorism, according to the Saudi government. And the Grand Mufti Sheikh Abdulaziz Al Sheikh, Saudi Arabia's top Sunni cleric, described the killings as a "mercy to the prisoners" since it stopped them from doing more evil things, the Associated Press reports.

Al-Nimr played a notable role in the Arab Spring; he repeatedly called for peaceful protest against Saudi Arabia's autocratic regime.

"We are particularly concerned that the execution of prominent Shia cleric and political activist Nimr al-Nimr risks exacerbating sectarian tensions at a time when they urgently need to be reduced," the Department of State said in a statement on Saturday.

"In this context, we reiterate the need for leaders throughout the region to redouble efforts aimed at de-escalating regional tensions," it added.

The big picture: Sunnis make up the majority of Muslims, with some estimates as high as 85% to 90%. And, in recent history, the Sunni-Shia dynamic has been an acrimonious one.

Tensions between the two have manifested themselves in many ways, from street violence to foreign policy.

Yemen is just one example of the large-scale implications. The fragile country has become the battleground for a proxy war between Saudi Arabia and Iran. Saudi Arabia supports the official Sunni government and has been aggressively bombing Houthis, the Iran-backed Shiite rebels.

Then there's the not-so-small matter of Syria. President Bashar al-Assad and his government are backed by Iran, with auxiliary support provided by Iranian-supported Hezbollah. Conversely, Saudi Arabia (and the United States) have been supporting Sunni militia opposing the Assad regime. The trouble is, in the midst of a civil war, it's very hard to control and delineate armed factions and there is a growing concern supporting Sunni rebels is advantageous to the Sunni terrorist-network ISIS.

Executions like al-Nimr's, as the State Department noted, comes at a time when the region desperately needs sectarian violence quelled. Growing instability in the Middle East has created political and social vacuums in which organizations like ISIS are able to thrive.