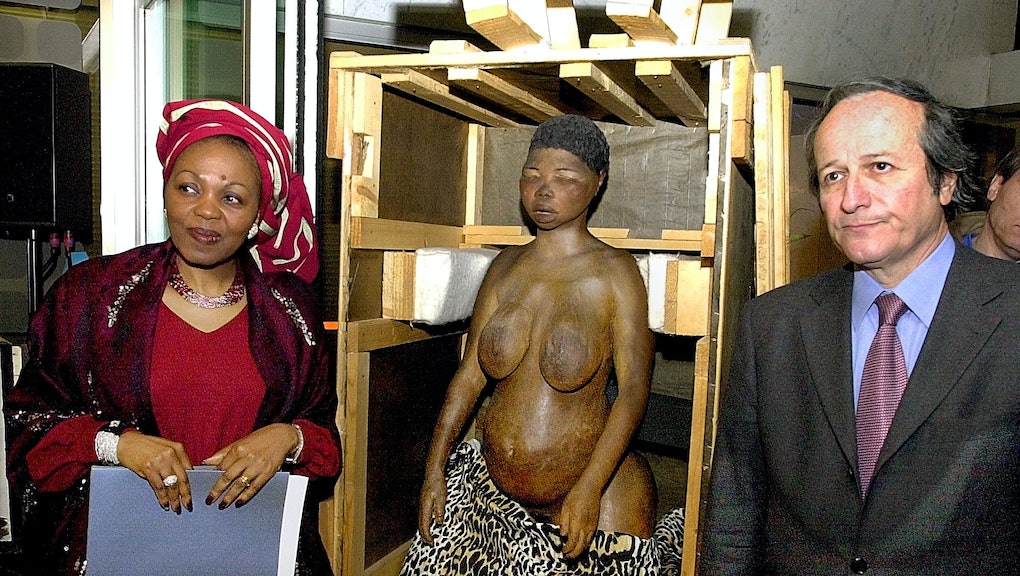 Who Is Saartjie Baartman? The Truth Behind the Woman Who Inspired Beyoncé's Rumored Movie

If you believe London's gossip rag the Sun, then megastar Beyoncé is set to write and headline a new movie about Saartjie Baartman, probably known more colloquially as the "Hottentot Venus," a 19th-century woman who was abducted from her South African life in the Khoi Khoi tribe and forced to travel Europe showing off her big butt and large labia to gawkers.

And if you believe a tweet from Nylon magazine, Baartman was just a "freakshow performer."

But this social media snafu begs the question: Who was Baartman? And why is it wrong to call her a "freakshow performer"?

Baartman later came to be known as Sara Baartman or the "Hottentot Venus." During her performances, Baartman performed "native" dances and played African instruments while wearing a flesh-colored suit. In fact, some scholars argue Baartman's round posterior that made waves through early 1800s Europe would go on to inspire fashions later in the century: namely, the corset and bustle, which gave women thin waists and bigger butts.

"Saartjie Baartman's body shape ... was viewed by Europeans as ugly, yet later on, the same body, though not acknowledged, was used to inspire the creation of [the] Victorian bustle dress that resembled her body in every aspect," Anne Mastamet-Mason wrote in an essay in the Open Journal of Social Sciences.

Baartman received the derisive nickname "Hottentot Venus" for two reasons: "Hottentot" was a slur for people from her Eastern Cape tribe, and the Roman goddess Venus was supposed to be a model for the most beautiful woman. Her nickname branded her as the pinnacle of African tribal beauty in an undercutting way.

The New York Times praised a 2007 biography of Baartman, and only two years later, the Los Angeles Times praised a subsequent biography. In the introduction to the latter, the authors wrote that Baartman's legacy is defined by just five years of her life: the time in which, after meeting a British surgeon who was entranced by her big butt and labia, she was paraded around Europe and gawked at by curious men and women.

Baartman's body was ogled and her agency was taken, and this is perhaps why Beyoncé is reportedly attracted to her story. Black women like Beyoncé and Nicki Minaj struggle daily with writing their own narratives around their curvaceous bodies. While Minaj and Baartman share screen time in a noticeable number of think pieces — on For Harriet, XOJane and Ms. magazine for starters — Beyoncé hasn't drawn that same comparison as many times. However, in an age where our fascination with celebrities' bodies endures, Baartman is an important historical touchstone whose relevance is only waxing.

Jan. 7, 2015, 9:52 a.m.: A representative for Beyoncé has reportedly denied the rumor that the singer is making a movie about the life of Saartjie Baartman.