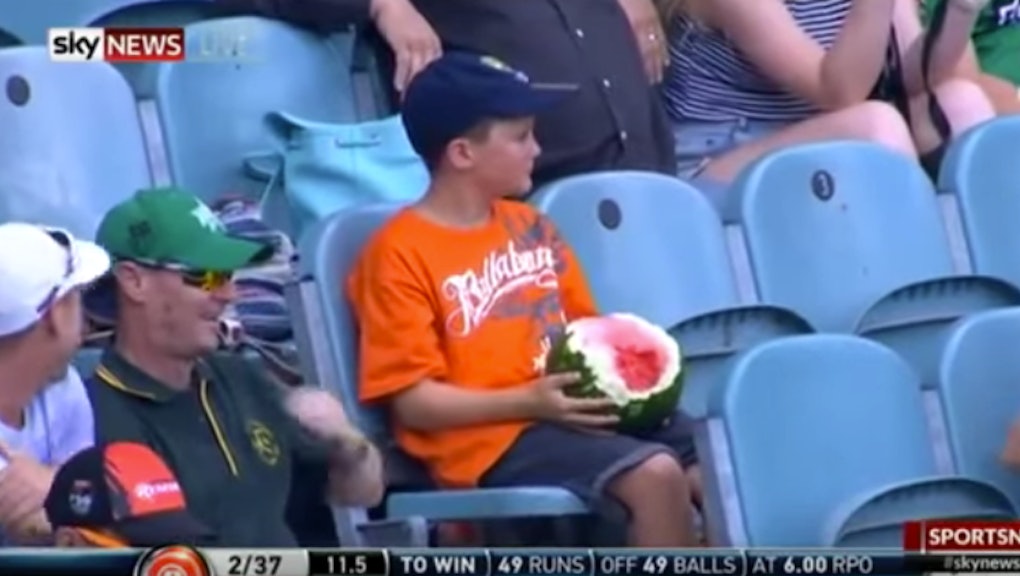 It was (maybe) Andy Warhol who famously predicted that, in the future, everyone would have their 15 minutes of fame — but he had no way of knowing that, with Instagram, Vine and YouTube, you only need 15 seconds to become an instant internet celeb.

Now that an entire generation has come of age on social media, there are plenty of examples of people who've popped into (and out of) the public eye by way of viral videos, the most recent of which was a video of a boy in Australia eating a watermelon, rind and all, before an entire stadium of people. Without further ado, here are some of the best.

"Apparently kid," aka Noah Ritter, made a huge splash when he crashed a local news broadcast and announced that it was his very first time on TV. Apparently. Ritter even made it to the next level of internet fame: Appearing on Ellen.

This is one of those unforgettable viral videos that remains a hit years after it was posted to YouTube in 2009. The cat masseuse in question is actually named Maryjean Ballner, and, according to her website, she is still spreading the gospel of animal massage across the U.S.

Australia is a truly magical place: Hot off the press, this kid earned his 15 minutes of fame when he ate an entire watermelon, rind and all, while watching a cricket game in Melbourne. Mitchell Schibeci, a.k.a #WatermelonBoy, told BBC, "I'm not really a hero, I'm just a normal average kid." You're a hero to us, Watermelon Boy.

This is another classic gem from 2009 (perhaps the golden age of viral videos) that launched a young David DeVore into the halls of internet immortality. This video of a doped-up 7-year-old who just had dental surgery has reportedly earned his family thousands of dollars since it was first posted to YouTube.

This inexplicably catchy song was first uploaded to Vine in 2015 and it's been stuck in everyone's head since it hit the internet. The man behind the masterpiece is Nicholas Fraser, and he's currently working on turning his 15 minutes of fame into a full-fledged career.

This cover of Nicki Minaj's "Super Bass" was super cute, and it made pint-size singer Sophia Grace Rowley and her hype-woman, Rosie, into legitimate child starlets, at least for a little while. The girls even got to meet Nicki Minaj in person! ZOMG.

It's a well-known fact that babies cry. But this baby is very, very special because she cries not because she's hungry or grumpy, but because she's truly moved to tears by her mom's singing. Mary-Lynne Leroux was only 10 months old when her dad recorded this viral vid of her eyes welling up when her mom sang a heartbreaking country song. What a ham.

Every millennial remembers where they were the first time they heard Rebecca Black's now-iconic "Friday." Let's face it, this was our moon landing. The "Friday" music video first sprang into existence in 2011, and remains a "so-bad-it's-good" internet classic to this day. After all, it's filled with timeless lessons like "Tomorrow is Saturday and Sunday comes afterwards."

It's actually Charlie's older brother Harry who's the star of this 2007 internet hit: The moment where he yells "And it's still hurting!" solidified his place among the pantheon of viral-video stars. The boys are a bit older now, and presumably no longer having issues with biting, but the video is still pure gold.

This workout video is made of 100% internet weirdness and we love it. First uploaded to YouTube in 2013, it "shows the 4 modes of Prancercise" courtesy of instructor and creator Joanna Rohrback. Rohrback is still promoting her unique workout methods to this day, and her website features the helpful disclaimer, "Any photos showing her moving along side a horse are not a suggestion that anyone should try such an act."

Back before he had been the leader of the free world for 8 years, Barack Obama was just a charming young candidate ... and he was totally crushable. Amanda Lee Ettinger played the "Obama girl" in this 2007 viral video, and since then she's been working on extending her 15 minutes of fame with some minor acting roles. She has yet to announce any endorsements for the upcoming presidential election.

This tiny panda baby probably doesn't realize that she achieved internet stardom when she scared her mom with her sneeze in this classic YouTube video, but she did. She was even on 30 Rock.