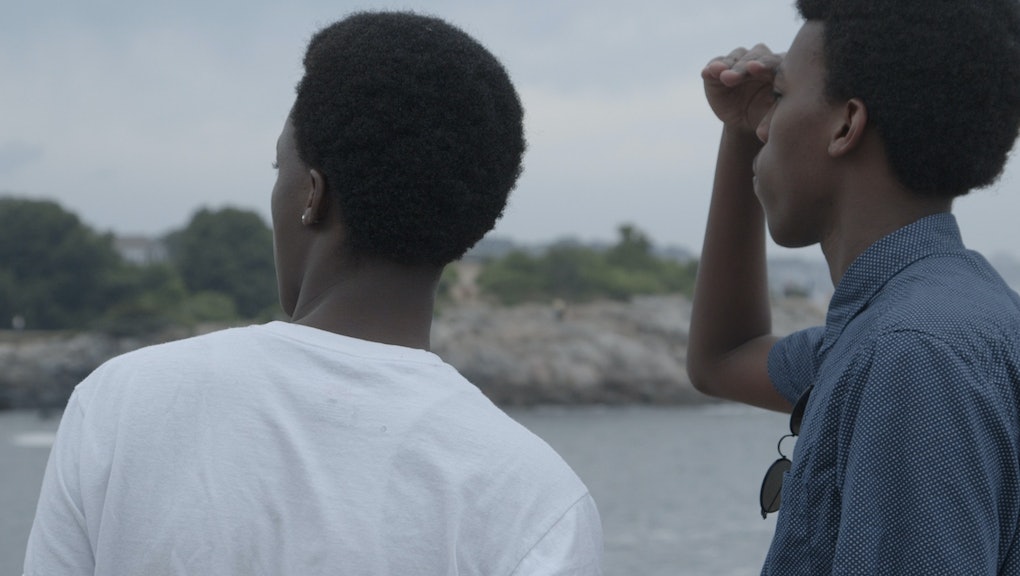 Two Burundian brothers, 17-year-old Jessy and 19-year-old Franck, fled their home country in 2014. They left behind their parents and four siblings, and settled in a perhaps unexpected destination: Maine, the whitest state in the United States.

Jessy and Franck found relative refuge here, but obstacles still remained — namely, they needed American guardians to expedite their asylum-seeking process and shield them from the state's threat to eradicate assistance normally provided to asylum seekers.

Enter Sheldon and Denise Tepler of Topsham, Maine. When they learned of the brothers' predicament, they immediately empathized and offered to be their guardians. While their own children are technically native "Mainers," Sheldon and Denise are not only "from away" — a phrase Mainers frequently use to describe anyone born elsewhere — but also Jewish in the predominantly Christian state. In fact, Sheldon's mother had her own experience with displacement at the same age as Jessy and Franck: In the midst of the Holocaust at age 19, she escaped Poland and found refuge in the Soviet Union and then in a German refugee camp, before emigrating to North America.

"She didn't know what happened to her parents, her community was wiped out," Sheldon Tepler told Mic. "I grew up with the Holocaust very much a part of my life," he said, adding he was raised to believe "the moral lesson of the Holocaust is you don't let it happen to anyone."

Like Sheldon's mother, the brothers left behind a nation in conflict. This past year, the Burundian president unconstitutionally — yet successfully — launched a bid for a third term, according to the BBC, ensuing in an influx of violence that contributed to nearly 127,000 Burundians having registered as refugees as of last June, according to the United Nations High Commissioner for Refugees — a number that is almost certainly now higher. Citizens of Burundi, one of the poorest countries in the world, are no strangers to violence, however: Ethnic violence between Tutsi and Hutu citizens has claimed hundreds of thousands of Burundian lives over the past few decades.

While their decision to take the brothers in was born from empathy for those facing the trials of escaping persecution and feeling like an "other," the Teplers are conscious of the privileges that distinguish their current situation from Jessy and Franck's. It's a complex and challenging journey that Maya Tepler, Denise and Sheldon's 27-year-old daughter, hopes to explore in a documentary entitled From Away.

Maine is an unlikely, but popular, destination for asylum seekers. The state, according to the most recent census, is 95% white. But Jessy and Franck are hardly the only ones to end up in Maine. Nearly 1,000 refugees have settled in the state since 2011, the Bangor Daily News reported an Office of Refugee Resettlement study found, and the state has experienced an influx of asylum seekers — who differ from refugees in that they pursue protection in a country after arriving rather than before — as well.

In fact, the influx of refugees and asylum seekers was a significant point of political contention this past summer. Asylum seekers in the United States are prohibited by federal law from applying for work permits for six months after they arrive in this country, but thanks to a nationwide backlog, the wait to work can last much longer, the Portland Press Herald reported in 2014.

Coco Kazadi originally found asylum in South Africa after escaping conflict in his native Democratic Republic of Congo in 2003. He is now seeking asylum in Maine. "It's not easy to be incomeless for more than six months," he told Mic. "Finding accommodation is difficult since most landlords require the Social Security number before they can even consider your application for rental accommodation."

Maine, however, had garnered a reputation among asylum seekers for financially aiding asylum seekers as they await legal working permits through a system called "General Assistance." This program gave Maine almost $2 million of federal funds last year to provide asylum seekers with cash and medical assistance for eight months after their arrival, according to the Bangor Daily News. Over the summer, the Maine House of Representatives passed a bill to allow this assistance to asylum seekers to continue for up to two years.

"I don't think we can afford to turn our backs on these families," Rep. Drew Gattine (D-Maine) told the Portland Press Herald in June. "Providing assistance to asylum seekers is a relatively small investment today that will pay dividends into our future."

Opponents, however, immediately protested and attempted to fight the bill at least in part because they felt supporting asylum seekers disadvantaged others — specifically "elderly and disabled Mainers" waiting for assistance, according to Portland Press Herald. The opposition was largely led by Maine Gov. Paul LePage, who most recently made headlines for a racist comment about out-of-state drug dealers and who has a history of making other offensive statements. LePage stopped using state tax money to provide asylum seekers with assistance in 2014. He and several supporters rallied to launch an immediate people's veto to prevent the bill extending this assistance from going into effect.

It's a xenophobic sentiment hardly limited to Maine. Much attention has recently been paid to rising anti-refugee sentiment in the United States: For example, governors of at least 31 states have stated that they oppose allowing Syrian refugees into their states, CNN reported in November, and disgruntled citizens have organized protests promoting a similar sentiment across the country.

But the idea that asylum seekers or refugees aim to "take away" resources from those born in the United States without productively giving back to the community are simply offensive, ignorant and unfounded.

"I would like to build up and contribute to the peace, love and justice that I experience every single day in this country," Kazadi said. "We just need to be given an opportunity to adjust and stand on our feet as people."

Racist reactions: Although the efforts of LePage and his supporters were ultimately unsuccessful in Maine, the Portland Press Herald reported in September, many asylum seekers told Tepler they regularly encounter the type of resistant attitudes their actions supported.

Some people "swear at you in public," Kazadi, who will be featured in From Away, told Mic. Jonata Mbongo, a 17-year-old Angolan asylum seeker also interviewed for the film, has encountered blatantly racist slurs. During a soccer match, for example, a rival team taunted "go back to Africa" and "eat a banana," he told Mic.

But while such reactions are, of course, unacceptable, many asylum seekers regard them as annoying or inconvenient in comparison to the horrific ethnic conflicts from which they've escaped.

"If you come from a place where your family had to leave in the middle of the night because they were worried their daughter was going to be raped or their son was going to be captured to be in the child army, some racist white people — you can probably let that roll off your back," Maya Tepler told Mic.

Asylum seekers themselves confirm her observation. When Tepler asked asylum seekers why they came to Maine, many noted the state's safety.

"I need a place to rebuild my life," one asylum seeker in his 40s — a survivor of torture who fought human rights atrocities in Congo — reportedly told Tepler, adding that Maine is "a place I can do that." Although he has encountered racist attitudes since moving to Maine, he acknowledged, he ultimately regards them as "annoying but not life threatening."

While the United States certainly has its fair share of problems, including persistent and systemic racism, many born in the nation fail to understand that the experience is still one of relative privilege and safety for everyone — no matter their background.

"It's painful to realize everything I love and own is left behind," Kazadi said. "However, America is offering me a new hope, a new perspective. Americans have demonstrated to me that with the most important resource that I need so much, I can make it again here. That resource is freedom."

But a relatively better experience doesn't warrant complacency. Just because asylum seekers no longer face violent, life-threatening discrimination in their native countries hardly means their everyday experiences with racism are acceptable. It's a tension Tepler hopes to explore in her film.

"There's a sterilization — particularly among progressive, educated people — that 'we don't talk about [racism]' because it feels inappropriate," she said. Yet the United States is "not a post-racial society," she said — and the reaction of Mainers to a new influx of diverse neighbors reveals attitudes and opinions that are likely evident, but which are frequently obscured by standards of political correctness.

Maine is "a weird microcosm of a place that has never had to deal with race in a real way before," Tepler said, and many of its residents are really "visceral and ignorant and uncensored because they're so inexperienced with [interacting with people of color]." Tepler hopes her documentary, therefore, will explore how white Americans confront ingrained racism.

And she will do so by starting with herself. While Tepler initially wanted to only tell her own brothers' story, she soon realized, "I can't tell their story, it's not my story to tell" and that she must carefully consider "what it means trying to be a white person making a film about African immigrants' experiences."

What she ultimately hopes to create is a compilation of stories — from her own family as well as others in Maine — that reveal "difference is really what defines this country," she said.

"America is flawed, obviously there are problems, but seeing America through the eyes of these immigrants has made me remember just how great America is," she said. "Rather than view newcomers and difference negatively, I hope this film reminds people that difference and newness are the building blocks of our nation. I hope that my film makes people curious, rather than fearful of difference.

"I hope that my film forces everyone to realize that we are all 'from away,' but that feeling of otherness is what makes us unique, makes us strong, makes us American."