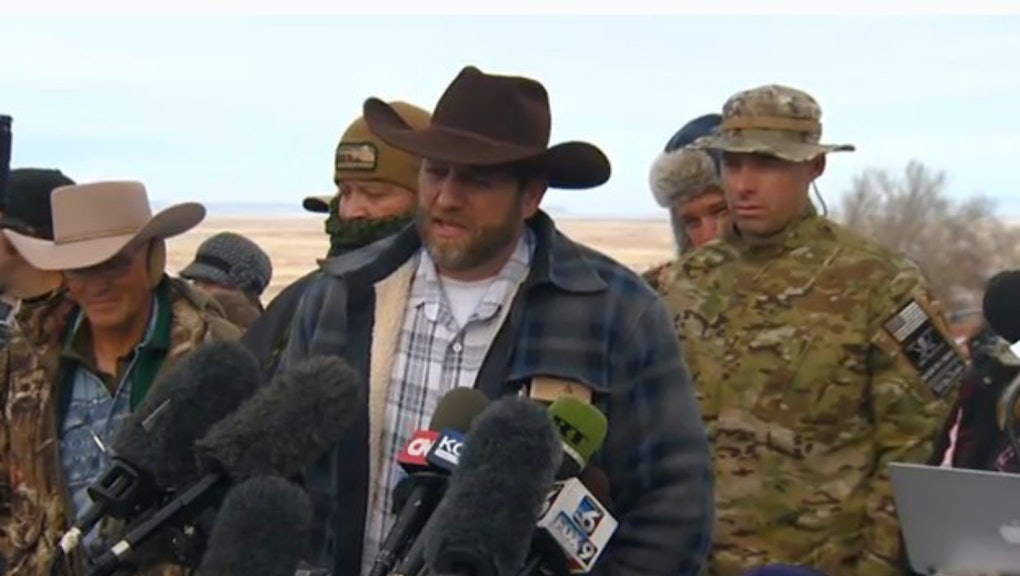 The heavily armed militia that took over a federal wildlife refuge headquarters building in rural Oregon on Saturday night now has a name: Citizens for Constitutional Freedom.

In a press conference broadcast from outside Malheur National Wildlife Refuge, near the city of Burns, on Tuesday, the group's leader, Ammon Bundy, announced the militia's new moniker, explained the group's rationale and remained remarkably vague about what his followers' actual demands were.

"Our purpose as we have shown is to restore and defend the Constitution," Bundy told reporters. "We love our country. We love the people in it. We know that we are struggling to be able to know what to do as a nation and in many way we are dividing, and we hope we can restore those things and unite in protecting our freedoms as individuals."

Bundy told the assembled press the militia had chosen the Malheur refuge because of its relation to Dwight and Steven Hammond, two local ranchers who a federal court recently re-sentenced to more prison time as judgment in a 2001 arson case. The Hammonds were found guilty of destroying 139 acres of Bureau of Land Management land, but received sentences below the mandatory minimums for their offenses, leading the prosecution to appeal for a stiffer penalty.

While Bundy admitted the Hammonds had withdrawn from the CCF's offer to give them refuge at the wildlife center after receiving "threats" from law enforcement, he nonetheless described the case against the two ranchers as malicious, designed to steal the Hammonds' ranch. A subordinate read a long and rambling "Redress of Grievances" the CCF says it sent to county and state authorities, seemingly written in legalese.

"Human rights have been violated in many ways," Bundy added.

He issued no specific demands, instead insisting the federal government restrict its activities to those authorized by the U.S. Constitution.

While Bundy said the militia had set up defensive measures, they have had no contact with BLM employees and have only received an indirect message from law enforcement informing them there were no plans for a surprise raid on their encampment.

When a reporter asked Bundy how his actions were legal, Bundy responded, "Go to the Constitution and study it. Find out what is legal or not."