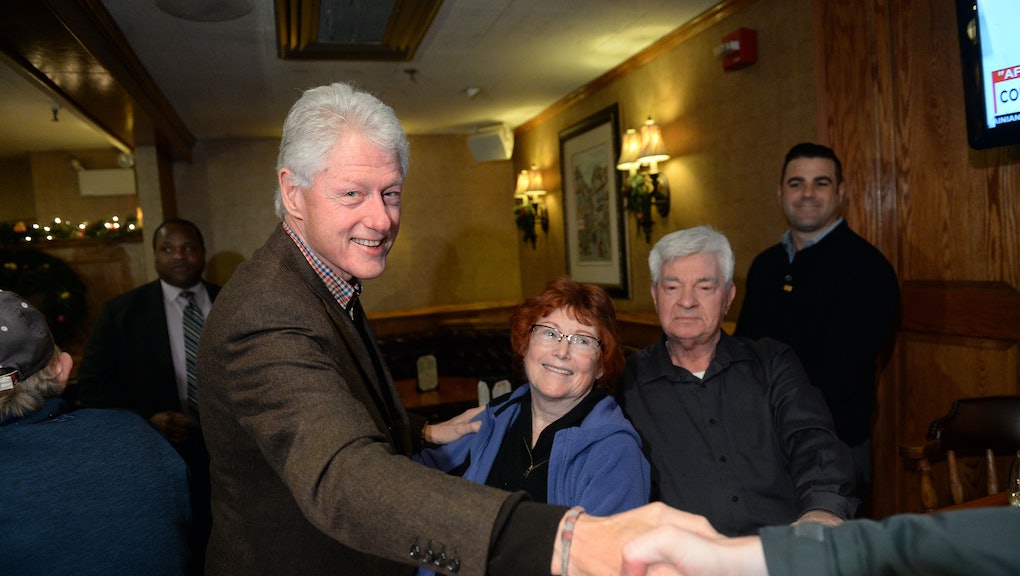 Florid-faced and hoary-voiced, Bill Clinton was scathing in his assessment of his wife's improbable rival.

"Give me a break," the 42nd president intoned. "This whole thing is the biggest fairy tale I've ever seen."

The focus of Clinton's ire? Then-Sen. Barack Obama (D-Ill.), who in January 2008 had just defeated Hillary Clinton in the Iowa caucuses and looked poised for a victory in New Hampshire, where Bill Clinton was speaking before voters at Dartmouth College. Obama's ultimate triumph over the Clinton machine was due, in large part, to his 2002 opposition to the Iraq War, which then-Sen. Hillary Clinton had voted to authorize; Bill Clinton's seething denunciation of Obama came as he argued that the two candidates actually differed very little on the issue.

Nearly eight years to the day later, a very different Bill Clinton was back in the Granite State, appealing to voters as the former secretary of state embarks on her second try for the White House. Appearing at a rally in Nashua, the ex-president wanted to make one thing very clear: He's not an angry man.

Lamenting the polarization of national politics, Clinton said, "I don't fit anymore. First of all, I'm a happy grandfather. I'm not mad at anybody."

Clinton certainly didn't suggest otherwise. He unleashed no fury on Sen. Bernie Sanders (I-Vt.), whose Democratic campaign is currently polling ahead of Hillary Clinton's in New Hampshire, nor did he go after GOP frontrunner Donald Trump, who has been unsparing recently in depicting the former president as a serial sexual "abuser" of women. (Clinton did say that several GOP hopefuls were "kind of scary.")

It remains to be seen whether the former president will remain this restrained — could a Sanders surge or a heated general election battle against the Republicans spark a return of the often-bitter and vengeful Bill Clinton of 2008? — but his focus Monday was on touting his wife's qualifications for the office he held from 1993 to 2001.

"I do not believe in my lifetime anybody has run for the job who is better qualified by experience, knowledge and temperament," he said of the former first lady, New York senator and secretary of state.

Clinton's trademark talent for the apt anecdote was on full display as he spoke of the challenges faced by Presidents Franklin Pierce and Abraham Lincoln, who overcame struggles with depression to ascend to the Oval Office. The former president also addressed the toll taken by New Hampshire's heroin epidemic, a prominent topic for candidates stumping there, calling it "a very big deal."

The elder statesman of Democratic politics also sought to marshal the faithful with reminders of the upcoming election's stakes.

"We need to recognize something that has received almost no attention in this election, which is that the next president of the United States will make between one and three appointments to the United States Supreme Court," Clinton said. "And I know who I want doing that."

A new role: If Clinton was his wife's 2008 attack dog — albeit one who often went off the reservation, implying, for instance, that Obama won the South Carolina primary because he's black — his first solo campaign appearance of 2016 suggested he'll play a more supporting role this go-around.

Though it seemed, in the heat of the 2008 primary battle, that Clinton's status as a revered Democratic figure was imperiled, he has largely restored his reputation, thanks in no small part to his vocal support for Obama after Hillary Clinton withdrew from the 2008 contest, and during the president's 2012 re-election campaign. After the ex-president's rousing address to the Democratic National Convention in 2012, Obama quipped that Clinton should be named "secretary of explaining stuff."

For the former president — at once both wonkish and folksy — it's a role he may well reprise in the coming months.