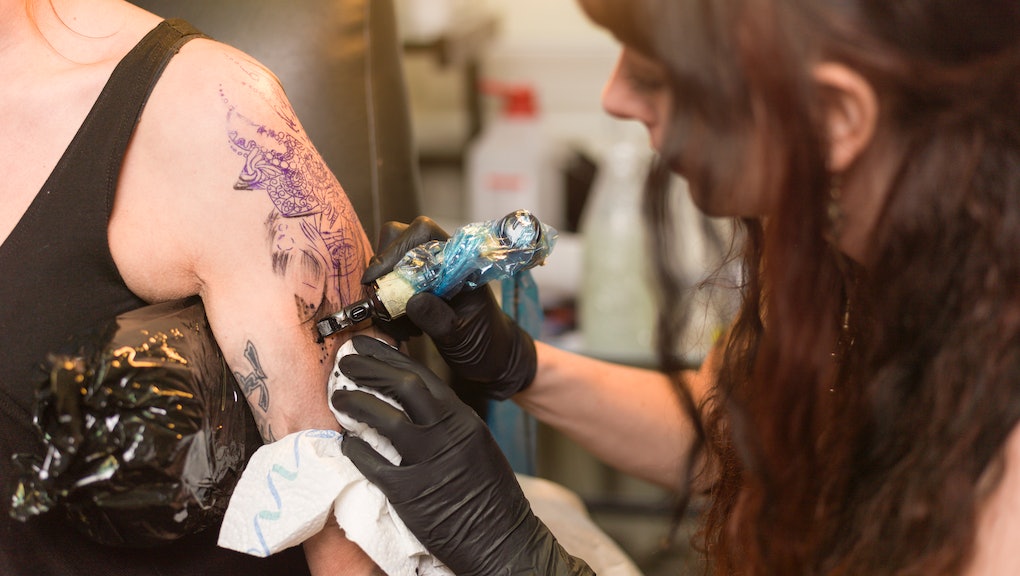 The Surprising Way Tattoos Can Give Women an Advantage Over Men

If you're looking at workplace equality from a paycheck perspective, women still get the short end of the stick (although California's Fair Pay Act is a promising step toward narrowing the gender wage gap). But there are some ways women can find an edge — including, according to a new study, their tattoos.

Researchers were interested in seeing how people reacted to visibly tattooed male and female workers in different service roles, in this case a surgeon and a car mechanic.

For the latter, the study's findings, published online in the Journal of Retailing and Consumer Services, sadly confirmed existing gender biases: Regardless of whether a female mechanic was tattooed, respondents still preferred the male mechanic.

But the more interesting result came from looking at photos of tattooed surgeons. Both male and female respondents in the study preferred tattooed female surgeons over tattooed male surgeons — despite the fact that surgery, like mechanics, is a traditionally male-dominated field.

Men and women's ink are judged differently: While further studies will need to be done to determine why this was the case, the results could be attributed to how men with tattoos are typically seen, Andrew R. Timming, a senior professor of management at the University of St. Andrews and a co-author of the study, told Mic.

"Stereotypes surrounding aggression or criminality are applied more to men with tattoos than women," Timming said. "The male surgeon with the tattoo could be viewed as more threatening and less competent than the woman."

So how does this actually benefit women at work?

"When managers make decisions about who they hire, they're thinking about how customers will interact with those employees," Timming said.

If customers favor a tattooed female surgeon over their tattooed male competitor, then women might stand a better chance of getting a job. This is especially applicable to millennials, 40% of whom have tattoos, according to the Pew Research Center.

"We're not talking about a fraction of society that's tattooed," Timming said. "We're talking about a huge proportion of society and this is particularly relevant among younger people. Increasingly, they're not just getting tattoos that are concealable. They're getting tattoos that are creeping down their arms, up their hands and into their necks."

Even though taboos surrounding tattoos still exist (the study's respondents favored the male and female surgeons without tattoos over those with tattoos), they are lessening, as evidenced by recent allowances mainstream chains such as Starbucks, Petsmart and Jimmy John's have made in their dress codes.

Women are still scrutinized, of course: While men with tattoos might be seen as violent or deviant, women with ink can face a different kind of negative scrutiny. Some research suggests they are viewed as more sexually promiscuous and less attractive, two perceptions that could account for increased body anxiety women may feel in the weeks after getting a tattoo. The damaging implications of a "tramp stamp" are still very much alive.

But female employees can feel some encouragement from the latest research, which is a welcome reminder that they too may gain an edge when men face their own gender-specific judgments at work. Hey, silver-inked linings, right?