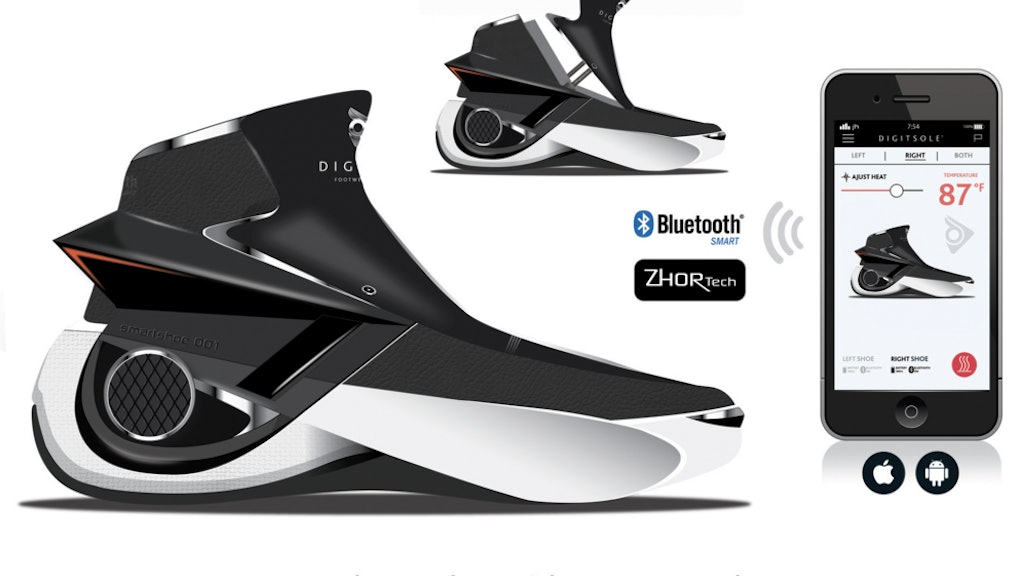 If you need to scrounge up money for your next pair of designer sneakers, you can save some cash by skipping on wool socks. French company Digitsole has unveiled some new, futuristic shoes that warm up your feet — literally.

The shoes, unveiled at the International Consumer Electronics Show in Las Vegas, are "connected," meaning they hook up to a mobile app via Bluetooth. There's a built-in heating system from the sole, a technology Digitsole has previously sold separately as a removable insole. The insole not only heats up, but also tracks information, like how many steps you've taken, at the sweet price of $199.

Now the technology is built into a Smartshoe, which incorporates the heating and tracking functions in one futuristic package. The shoe's black and white design has been described as a cross between a pair of Jordans and moonboots. Oh, and did we mention the shoe tightens around the ankle for a perfectly snug fit? All in all, it's the kind of footwear that's conjuring up images of Marty McFly's self-lacing Nikes from Back to the Future.

"We started to think, what can provide comfort to people?" Digitsole CEO Karim Oumnia said at the CES Unveiled event, according to GeekWire. "We didn't want to make a gadget. We wanted something really useful."

Heat certainly is useful — and the app controls the temperature up to 110 degrees Fahrenheit, a company spokesperson told Mashable.

We recommend wearing them with your self-heating jacket — or, you know, just something else cheap, since the Smartshoe will run you $450. That said, you could also pour your savings into seven pairs of wool socks if you're not feeling the questionably clunky, robot-like design of the Smartshoe. Your call.