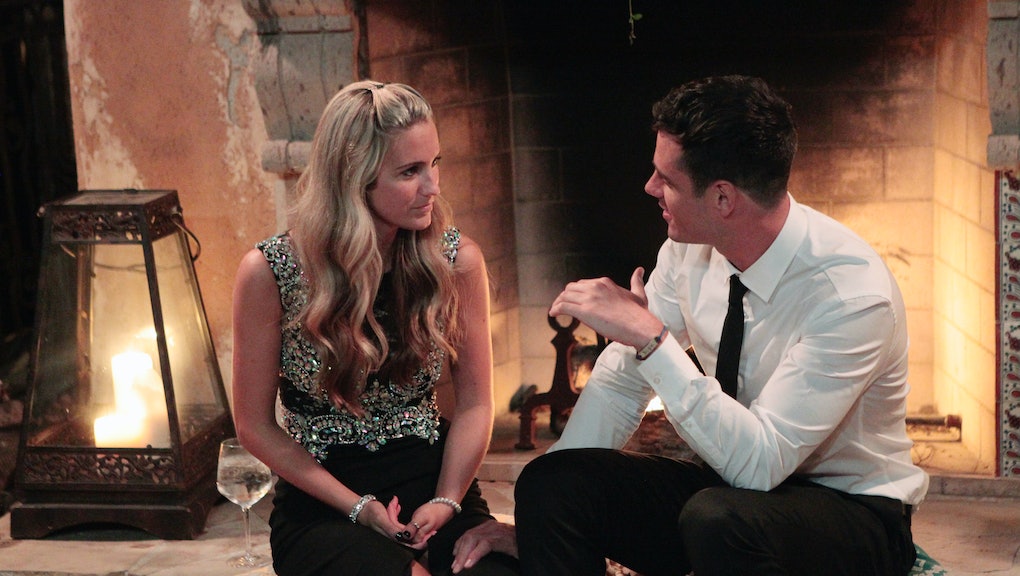 It's a truth universally acknowledged that modern dating can be pretty terrible. The borderline pornographic Tinder messages, the ghosting, the wishing your awkward dinner date would just ghost you — you know the drill.

Thankfully, the patron saints of romance over at ABC have created one holy night a week in which you're invited to sit back, bust open the Barefoot white zinfandel and revel in the schadenfreude of just how bad things could be: You could be dating on The Bachelor.

We were reminded of just how good we have it on Monday night's season premiere, during which viewers lived vicariously through 28 beautiful (if vocationally ambiguous) women as they began their 11-week fever dream to find love-everlasting with the adorable (and virtual stranger) Ben Higgins. Twitter reactions focused on the women's awkward antics, including wearing a massive flower hat, showing up with their siblings and not speaking English for the entire episode.

But really, what stood out most — and really, stands out every season — is how much worse dating is on this show than in our real lives. Which brings us to our first point...

1. IRL, you and your new person are free to date around a little and not rub it in each other's faces. In The Bachelor, not only is he the only one in the relationship who gets to see multiple people, but you also must turn the other women into your sister wives. (Note: Sometimes said sister wives are literal sisters. Because apparently ABC producers think that dating the same dude counts as a family bonding activity.)

2. Your solid, reliable job is a proud asset — unless, of course, you're on The Bachelor. On the show, not only are you rewarded for quitting your cool job to go on a first date, but "twin" or "chicken enthusiast" counts as a viable profession.

3. Thinking about keeping your last name? Not in Bachelor country, you aren't. Before Ben even met his 28 lady-loves, he was already referring to the winner as "Mrs. Higgins." While the modern dater would probably expect to discuss this complicated topic before deciding on what best works for their relationship — no matter the conclusion, it is an important conversation! — ABC assured viewers that the contestants were down.

The very next scene literally showed one of the women toasting to becoming "Hashtag Mrs. Higgins!" (Yes, the hashtag was vocalized). Another declared, "Jessica Higgins sounds good." And another still went so far as to introduce herself to Ben by handing him a save the date card for their March 14 wedding with the calligraphed social media prompt #ToHigginsAndToHold.

In the words of Emily Post, it's never too soon to claim a wedding hashtag.

4. Picking an outfit for a first date is a tad stressful IRL. But at least you don't have to bust out your junior prom dress and mask from last Halloween to be deemed appropriately dressed.

5. There's little-to-no risk of being attacked by an animal on a real date. Odds that your sparkly gown will be trampled on by a mini horse over the course of the evening, however, are high on The Bachelor. (Unless you met on FarmersOnly.com, in which case it's every cowgirl for herself.)

6. No small talk compares to the painful small talk of The Bachelor. Making small talk with a blind date can be super awkward, but at least you don't need to bombard him with puns or tell him a Tragic Personal Story™ to ensure that he'll be able to differentiate you from the 27 other women he's simultaneously on a first date date with. The Bachelor is like playing live-action Tinder, and it sounds exhausting.

7. There is no date longer than a Bachelor date ... If your blind date turns out to be kind of meh, at least you can leave once the bill's been paid — sooner if you have a creative excuse and Venmo. Bachelor contestants who didn't make a love connection weren't allowed to go home until daylight.

8. ... and no breakup worse than a Bachelor breakup. Then, you know, there's the whole getting your breakup broadcast to millions of people on national television. At least not matching with someone on Tinder is something you can come to terms with in the privacy of your own apartment.

Still feeling bad about your crappy date with the dude who had very misleading OkCupid pictures? Take heart. There's always Bachelor in Paradise.