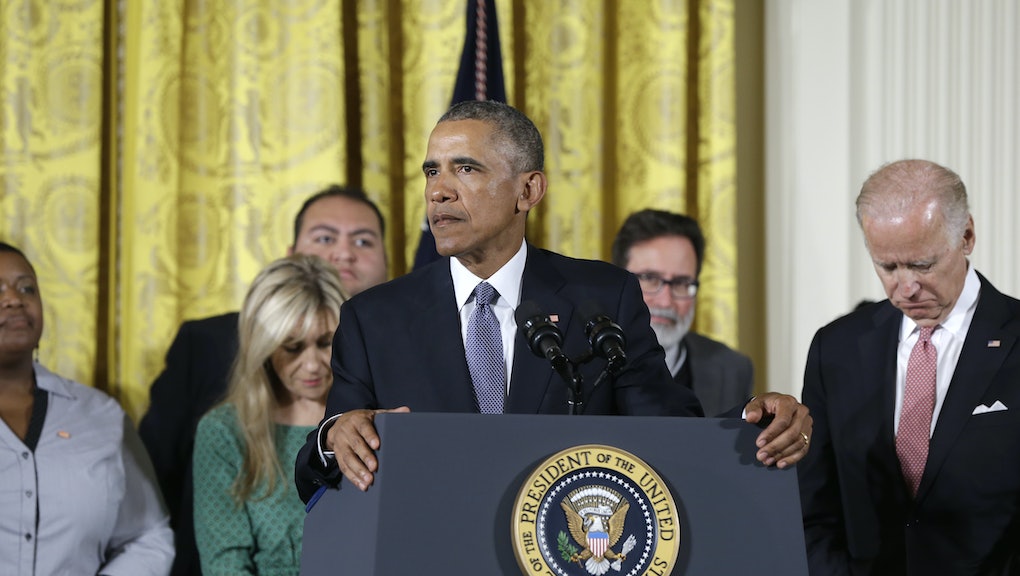 After years of futile agitation for gun control reform, President Barack Obama is taking matters into his own hands.

On Tuesday, Obama announced a series of executive actions that would, among other things, strengthen requirements for vendors to sell guns and make background check processes more robust. The measures will go into effect without congressional approval.

"The United States of America is not the only country on Earth with violent or dangerous people," Obama said during a press conference surrounded by the loved ones of victims of gun violence. "We are not inherently more prone to violence — but we are the only advanced country on Earth that sees this kind of mass violence erupt with this kind of frequency."

The president, who teared up while telling stories about victims, warned against the perils of acclimating to these abnormal levels of violence.

"We become numb to it, and start thinking this is normal," Obama said. "And instead of thinking about how to solve the problem, this has become one of our polarized, partisan debates."

The executive actions are designed to curb violence using a number of different approaches. The most important initiative is the administration's attempt at closing the notorious "gun show loophole": a gap in current law that allows guns to be purchased from private vendors at gun shows and online without the purchaser being subjected to a background check.

"It doesn't matter where you conduct your business: from a store, at gun shows or over the internet. If you're in the business of selling firearms, you must get a license and conduct background checks," the White House said in a statement emailed Monday night, outlining the policy.

The executive actions also call for a $500 million investment to improve access to mental health services, as well as changes to bureaucratic rules that impede the ability of the current national background check system to tap into databases that track people who are banned from obtaining firearms for specific mental health reasons.

Moreover, the White House announced additional funding for enforcing gun laws through the the Bureau of Alcohol, Tobacco, Firearms and Explosives. The FBI will also be overhauling the background check system to make it more efficient and hiring more than 200 new examiners and staff to help manage that process.

Obama had particularly harsh words for the gun lobby for devoting extraordinary resources to fighting even the most modest reform measures to be considered in Washington in recent years.

"The gun lobby might be holding Congress hostage. But they cannot hold America hostage," Obama said.

The new measures are the result of the Obama administration's three-month-long attempt at building a legal case for the most aggressive actions that could be taken unilaterally by the executive branch. Their intention was to be as ambitious as possible without having to devise legislation that would inevitably be stonewalled by a Congress that has proven resistant to even the most mild gun-reform measures in recent years. But even still, the executive actions will almost certainly be challenged by gun control opponents in the courts in the coming years.

Gun control has been one of the few issues that has repeatedly moved the president to unabashed displays of anger and sadness in the public eye. His singing of "Amazing Grace" during a eulogy for one of the victims of the Charleston massacre last summer easily ranks as one of the most memorable moments of his presidency, a rare moment of raw emotion for a politician who has often been faulted for being overly dispassionate in the face of crisis.

Obama has consistently pointed to inaction on gun control as the foremost example of how polarization in Washington obstructs commonsense reform.

"There's a general consensus in America about what needs to be done," Obama said Tuesday.

But the reality is a bit more complex. It's true that making background checks more expansive is extremely popular among the American public. In that regard, Obama's executive actions are unlikely to stir a great deal of controversy. But other seemingly low-hanging fruit like bans on assault weapons are not nearly as popular: One recent poll found support for an assault weapons ban to be below 50% — its lowest level in more than two decades, according to Politico. And gun sales spiked after the San Bernardino attacks in December, the latest example of how some Americans react to mass shootings with a desire for more firearms instead of more regulation of them.

That's all to say that Obama's mission to make it harder for mass shootings to ravage the nation month after month isn't just being held up by the gun lobby and Congress, but also a popular belief among the citizenry that guns are the solution to insecurity rather than the source of them.

You can watch Obama's statement here: