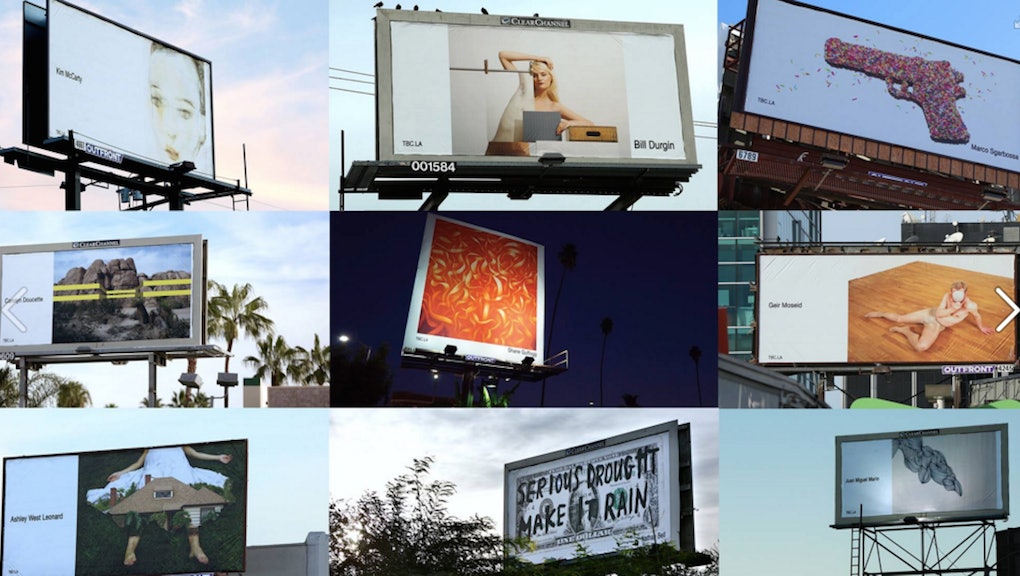 Californians have a lot to be angry about. They're experiencing their worst drought in 500 years, are prone to earthquakes and are no longer represented by the Terminator. In addition to all that, drivers in Los Angeles often sit amidst a film of car exhaust on the 101 (or the 405), allowing them plenty of time to stew about all of the above.

Now, however, one group's efforts may help dial back the rage that appears to actually be plaguing the region popularly known for its chill. Billboard Creative, a California nonprofit, is bringing modern art to the smoggy stage.

According to its mission statement, the group aims to "connect two groups that could use each other: artists and mass audiences, including the broad segment for whom traditional art exhibitions prove inaccessible for a variety of reasons."

Artist Mona Kuhn is spearheading the group's latest installments. "I want to stop traffic with art," she said in a press statement.

The current exhibit features works by Kuhn, as well as other established artists such as Panos Tsagaris, but also newer works by lesser-known artists such as Shannon Rose, currently a senior at Pasadena's Art Center College of Design, according to the Huffington Post.

"My billboard is up on a street that I used to walk down as a teenager with my first 35 mm camera, so seeing one of my photographs large-scale, in a place so public and yet so close to home and where I started, is incredibly surreal and exciting," Rose told the Huffington Post.

So, Rose is sold, but we're still on the fence about how much a commuter's quality of life could actually benefit from these pieces:

Eat your heart out, stressors:

Look at this relaxing food pastiche:

Or this bronzed bunch:

Mic reached out to Billboard Creative, which was unavailable for comment.