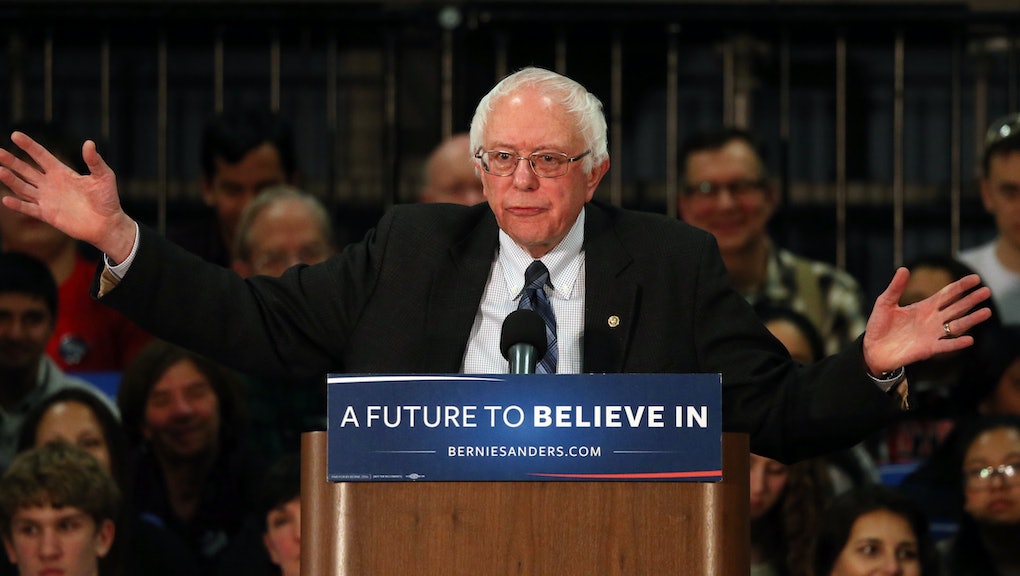 Meet the Man Behind Twitter's @berniethoughts (Spoiler Alert: It's Not Bernie Sanders)

Sometimes — hell, most of the time — politics needs a healthy dose of humor. So far in the 2016 presidential campaign Donald Trump's hair has dominated the meme market, but there's plenty of room for some good old bipartisan jokes. Enter @berniethoughts. In November New York-based writer and poet Spencer Madsen started the Bernie Sanders parody Twitter account after his live tweets during a primary debate struck a chord with his followers.

As a speaker, Sanders is the ultimate showman: He yells, he uses animated hand gestures — but when he's not politicking, what going on inside that head of his?

Madsen has some ideas.

"[During the first debate] I had lots of fun tweeting things like 'I'm glad Bernie Sanders isn't my grandpa because I wouldn't want to disappoint him' and 'Bernie Sanders talks the same way I imagine a bagel would,'" Madsen told Mic.

With this gluten-friendly metaphor in mind, Madsen, 23, began honing his interpretation of Sanders' voice, which he says is partly influenced by his grandmother.

"I never had a Jewish grandpa, which might explain my love for Sanders, but I have a very Jewish-grandma grandma, so the Jewish syntax is very near and dear to me," said Madsen, who, like Sanders, grew up in Brooklyn. "Instead of saying, 'We've been waiting for 10 minutes,' my grandma would say, '10 minutes already we've been waiting!'"

Madsen said that as @berniethoughts gained followers — more than 24,000 currently — friends and strangers have come up with their own suggestions. But they often miss the mark. Madsen's Sanders isn't meant to be old and senile, but overwhelmingly earnest, if a little strange.

"The @berniethoughts Sanders is deeply contemplative, mostly about food, has some illusions of grandeur and a child-like inability to discern fiction from reality," Madsen said.

Twitter is the perfect medium for the writer, who founded independent publisher Sorry House and wrote the book You Can Make Anything Sad. Contrary to the its title, the book is filled with tweetable snippets. Now, he said, he's cut out the middleman with @berniethoughts.

To his surprise, the account has attracted Twitter users of all political orientations, though not everyone is in on the joke. "My mentions are full of confused old white men who don't realize @berniethoughts is a parody account and are outraged that a presidential candidate is tweeting things like 'RENAME EGGPLANT,' he said.

Madsen maintains he's not trying to make any kind of political statement with the account, but make no mistake — he's a card-carrying BernieBro.

"There's something about Sanders that feels familiar to me," Madsen said. "And while I'm not at his rallies waving a sign, I've still found a small, confused way of expressing my love for him."