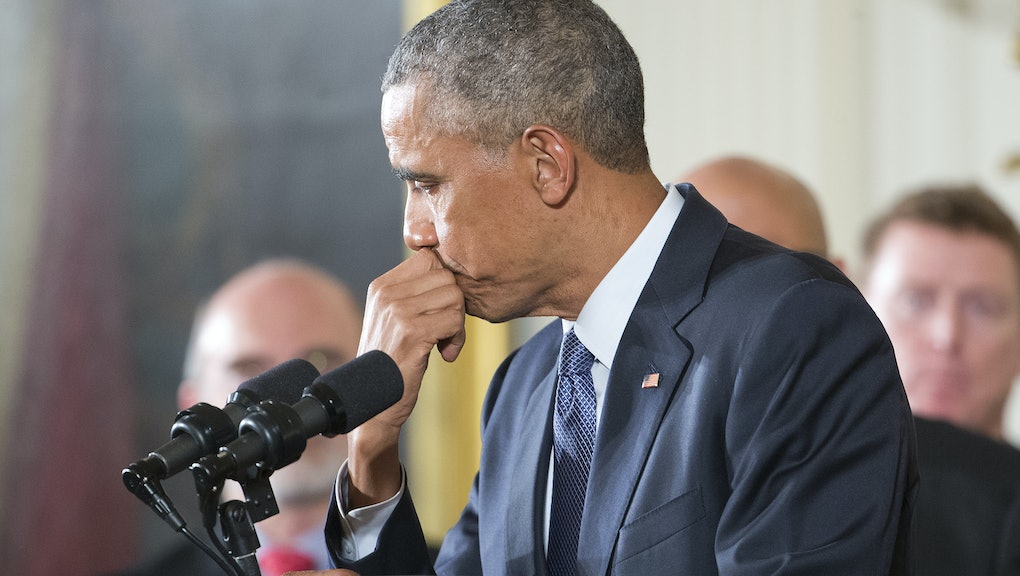 The tears President Barack Obama shed Tuesday during his pivotal speech on quelling gun violence had barely dried before top Republican critics took to social media to slam him for targeting the Second Amendment. Or most of them, anyway.

Sen. Ted Cruz (R-Texas), who's fighting to pull out a win in the fast-approaching bellwether Iowa caucuses, rallied supporters to "fight back" against a president he said is overreaching his authority.

Former Florida Gov. Jeb Bush got out ahead of Obama's speech in an op-ed Tuesday, saying Obama would go down as "one of the most liberal and divisive presidents in the history of our nation."

Bush, an early favorite for the nomination whose prospects went downhill amid the firebrand magnetism of the Trump campaign, used Obama's speech to throw an elbow at Democratic favorite Hillary Clinton.

"Today is another reminder that we can't afford to give @HillaryClinton the opportunity to expand on @POTUS' gun-grabbing agenda," he tweeted.

Trump — who has a concealed-carry permit and, like many of his Republican rivals, has said he opposes Obama's proposed measures to tighten access to firearms — also got in a dig at the Manchester, New Hampshire-based Union-Leader newspaper, which recently compared the real-estate mogul to Back to the Future bully Biff Tannen in a front-page editorial.

Republican National Committee Chairman Reince Priebus allowed that while "the recent tragedies that have gripped our country are heartbreaking," Obama's proposals would not have kept weapons out of the perpetrators' hands — "making his proposal all the more insulting and political."

"The truth is, this executive overreach is all about burnishing the president's legacy and boosting Democrat enthusiasm in a presidential election year," Priebus said in a statement. "But that's no excuse for subverting the will of the people's representatives in Congress, and the American people won't tolerate President Obama's dangerous power grab."

House Speaker Paul Ryan (R-Wis.) berated Obama's speech in a string of outraged tweets that left no doubt as to whether he and his allies in Congress would go along with Obama's program:

"President Obama's words and actions amount to a form of intimidation that undermines liberty," Ryan tweeted.

What's uncertain is how much of Obama's program will be enacted, and, depending on the next occupant of the Oval Office, for how long. What's clear is that Obama's choice to act after a rash of horrific mass murders is an attempt to skirt the inaction of a Congress populated by, and under pressure from, opponents of making guns harder to get.