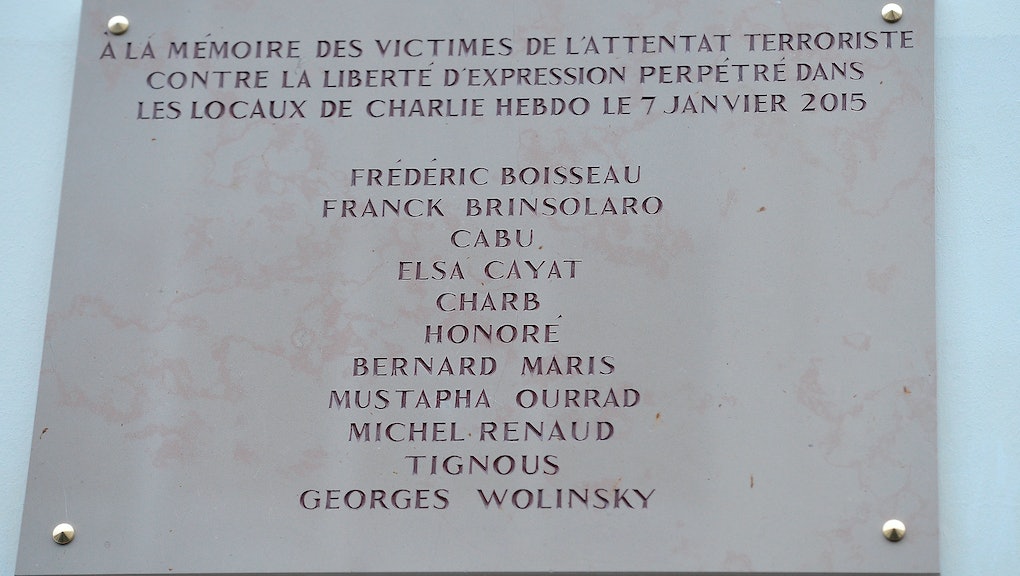 On 'Charlie Hebdo' Anniversary, Here are 8 Iconic Cartoon Covers and Why They're Important

On Wednesday, the weekly French satirical publication Charlie Hebdo released over 1 million special edition issues for the one year anniversary of the premeditated attacks on its office last year, which left 12 dead, the Guardian reported. On the cover is God wearing an AK-47 rifle, with the only color being red drops of what looks like blood on his clothes. "One year on: the assassin is still out there," it reads in French.

The cover aligns with Charlie Hebdo's cartoon depictions, which can be considered controversial for their association with religion, not limited to but including Islam and Christianity, NPR reported. Perhaps most controversial have been the illustrations of the Prophet Muhammed, which were the impetus for the January 2015 attack, the BBC reported.

However, the newspaper's mission is to defend secularism by highlighting what they see as the pitfalls of religion and war, according to its website. "Charlie fights religions which inspire swarms of fools, Rednecks who can't see further than the tip of their nose, the dotcom billionaires googlelising the world, bankers who gamble away our money, manufacturers who would make us live with a gas mask, footballers with more ego than talent, hunters who shoot us while mushroom picking and dictators who force us to agree with Bernard-Henri Levy," a description on the website reads.

On Jan. 7, 2015, brothers Cherif and Said Kouachi opened gunfire on the offices while dressed in masks, according to the BBC. They specifically asked for editor Stephane Charbonnier and four other cartoonists. "We have avenged the Prophet Muhammad" and "God is Great" were heard to be shouted by the two in Arabic. Of the 12 killed by the Kouachis in the attack, eight were journalists, two were police officers, one was a caretaker and one was a visitor.

From that incident birthed the slogan "Je suis Charlie," or "I am Charlie," in solidarity for the newspaper. The slogan was shared via social media over six million times within a week of the incident, BBC reported.

While the attack shocked Paris and the world, it wasn't the newspaper's first run-in with threats or even violence. In 2011, firebombs destroyed the offices after a Muhammad cartoon was printed.

Despite all of this, Charlie Hebdo has continued printing new issues and exercising its freedom of speech. Below is a collection of some of the newspaper's most memorable covers from recent years:

1. This one year anniversary issue of the January 2015 attacks is black and white with blood stains on a God-like figure.

2. This issue was the first to be published after the January 2015 attacks, with the cover reading: "All is forgiven."

3. After the 2011 firebomb incident, Charlie Hebdo printed a cover showing its cartoonist kissing a Muslim man. It reads, "Love is stronger than hate."

4. This 2006 cover showed Muhammad crying under the phrase "Muhammad overwhelmed by fundamentalists." In it, Muhammad says, "It's hard to be loved by idiots." This is one of the most provoking covers by the newspaper, Vox reported.

8. This cover depicted Hitler saying, "I'm an idiot! I should have worked at the BNP!" The criticism is aimed at the influence from big banks, which BNP is, Time reported.