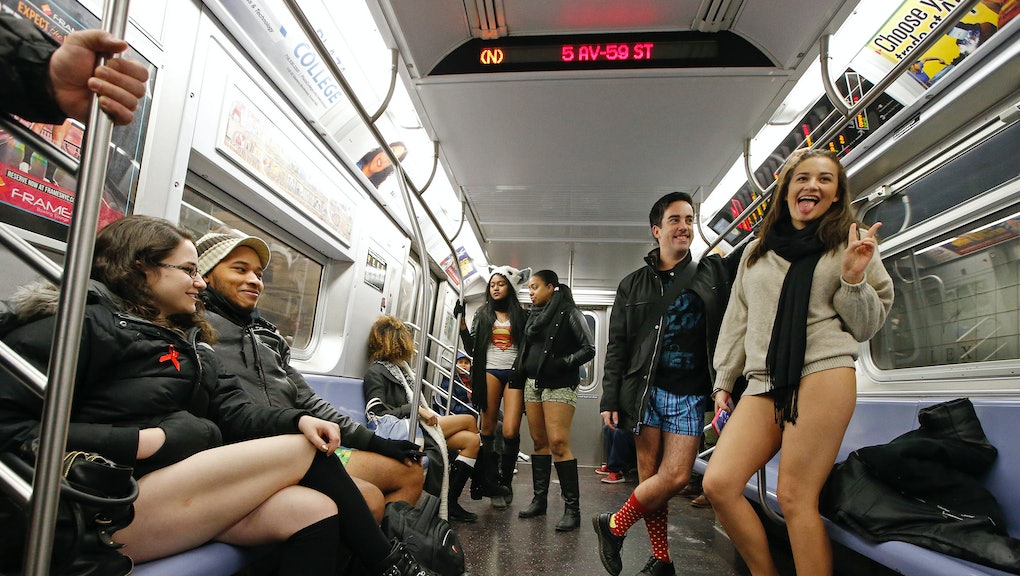 No Pants Subway Ride 2016: How to Play, Where to Go, What to Wear and What to Expect

It finally feels like January in New York, and the timing couldn't be worse for participants in the annual No Pants Subway Ride. For the 15th year, Improv Everywhere is orchestrating a citywide dropping of trousers on public transit; it's timed for 3 p.m. Eastern on Sunday, and don't worry, it's easy to get involved. According to the website, participants must be only two things in order to play:

1. Willing to take pants off on subway

As local television station WPIX reported, the No Pants Subway Ride is a popular event: More than 4,000 New Yorkers take part in the ride, which blossomed out of a prank pulled by seven friends in 2002. And while New York's Metropolitan Transportation Authority hasn't looked kindly upon its own employees getting in on the bottomless shenanigans, according to New York magazine, it hasn't banned the underpants parade, going so far as to call in extra MTA workers to help with crowd control.

Feeling adventurous this year? A rundown of rules and procedures is below. Because look how much fun:

What to wear: Interested parties are instructed to show up at one of seven meeting points at 3 p.m. sharp, equipped with a backpack and a MetroCard, outfitted in full winter regalia — hat, gloves, presumably a coat and so forth — and ready to drop trou. Participants should be wearing underwear. It shouldn't be too attention-grabbing or outlandish, the site says, nor should it be too revealing. "Our aim is to make people laugh, not piss them off," Improv Everywhere says. Tasteful, in other words.

These are the seven gathering spots, organized by area, according to the website:

General procedure: From there, the website says, pantsless commuters will be subdivided into groups and assigned a specific train car in which to get the party started. The groups will travel en masse, but once they get down into the subway, to get down to business: They should act as if they've never seen one another in their lives. Improv Everywhere encourages those involved to be cool; to behave as if theirs was just an everyday, nothing special ride with the MTA — until the train doors close, trapping the other passengers inside, at which point participants should remove their pants and stash them in whatever carry-on they brought.

"If anyone asks you why you've removed your pants," the website says, "tell them that they were 'getting uncomfortable' (or something along those lines)." Feel free to get creative, while sticking to the general script. Do not take pictures.

No-pants riders will have been assigned a stop before boarding the train. When they get there, they should exit the train as they usually would and wait on the platform, boarding the next train in exactly the same spot. They will continue on their merry ways in this manner until they reach Union Square, which the website designates as the end of the no-pants line.

The afterparty: There is one. It's at Webster Hall following the ride, according to the Facebook event page. For $10, attendees gain access to drink specials, snacks for purchase, 1,000 balloons and the chance to commune with their pantsless peers.

Don't live in New York? Never fear: The No Pants Subway Ride is a global event. A list of cities participating on Sunday can be found here.