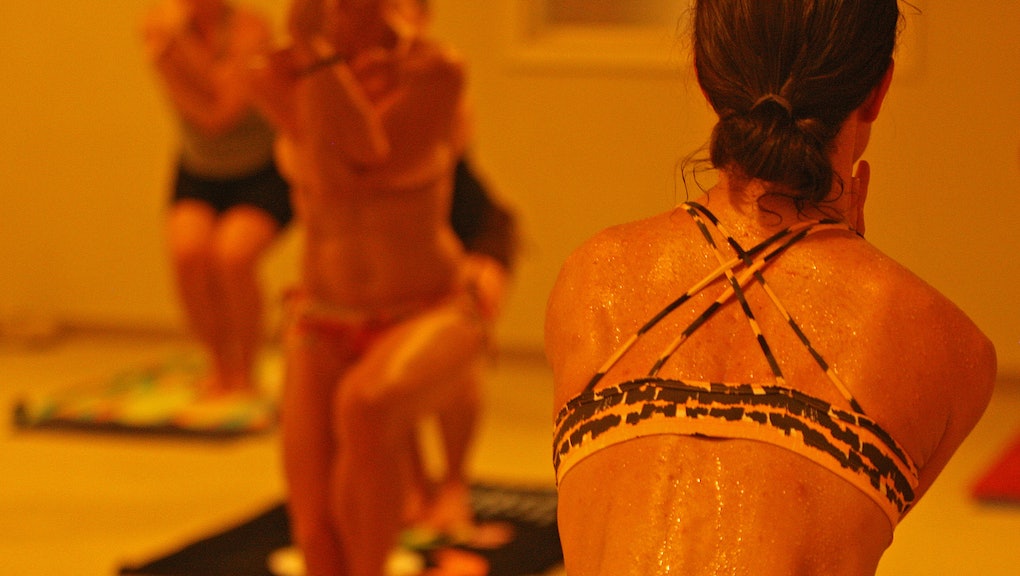 The first time I tried hot yoga, I was nervous about the copious amount of sweat I'd ooze from my body. A then-spokesperson for the trendy New York studio told me not to worry: Sweating would help me eliminate toxins from my body. It would feel amazing.

I won't deny the class felt great — but the toxins had nothing to do with it. In fact, sweating out toxins isn't even possible.

Hot yoga is on the rise, with studios cropping up across the country and celebrities like Zosia Mamet and Katie Holmes singing its praises.

Among hot yoga's many allures is the promise of "detoxification" via sweating — the idea that you can perspire away your impurities by working out in a room heated to 90 or 100 degrees Fahrenheit.

"The more you sweat, the more you detoxify," Arjuna Hot Yoga, a studio in Aspen, Colorado, claims on its website. "It's like taking a shower from the inside out — resulting in a body that is clean and pure after every practice."

Even outside of the world of hot yoga, sweating is touted as a quick and easy way to detox the body. For proof, look no further than Gwyneth Paltrow's wellness site, Goop, which advocates sweating as a way to purge the body of "harmful chemicals in everyday products." Articles abound on the detoxifying benefits of of infrared saunas and steam rooms.

Paltrow herself even hit up an infrared sauna in the hope of curing her contagious flu. "All contagion aside... Going to hit it with heat," she captioned an Instagram sauna selfie.

So can you sweat out toxins during hot yoga class?

Experts say no. Our bodies already detoxify themselves — and sweat isn't a part of it.

"Most of what you are sweating is water, but there are other chemicals that make up sweat, including salt, potassium, ammonia and urea," yoga teacher Amber Kim wrote on Breaking Muscle. "True toxin elimination comes from the kidneys and liver, and some from the colon."

"Doing a 90-minute hot yoga session and sweating to death is not releasing toxins," Kim continued. "You really are just dehydrating yourself and losing only water weight."

Kim has a point. As humans, our bodies have naturally been detoxifying themselves since long before hot yoga studios started appearing on the streets of Manhattan and Los Angeles. The key to our natural detoxification process? The liver.

Think of the liver like a filter for your blood. It takes in blood from the heart and intestines, which contains a mixture of nutrients and toxins. When it encounters nutrients, such as vitamins and minerals, it either converts them into energy our bodies can use, or stores them away for when we need them later. When it encounters toxins — such as drugs or alcohol — it processes them for elimination from the body via the intestines and kidneys.

The main purposes of sweating, meanwhile, is to regulate our body temperature. When our internal temperature gets too high, the roughly 2 million sweat glands that cover our bodies release perspiration to cool us down. Sweat is mostly water and salt, with small amounts of other substances like calcium, potassium and magnesium — but no toxins.

"Sweat glands sit in the skin and aren't connected to other systems in the body, so it makes no sense that they would eliminate waste," Dr. Rachel Vreeman, author of Don't Cross Your Eyes... They'll Get Stuck That Way!, said, according to Fitness Magazine. "The only role of perspiration is to keep us cool."

If detoxing is a lie, does a sweaty hot yoga class have any health benefits? Absolutely.

"It's a simple fact that practicing in warm temperatures means your muscles are just more soft, more open," Tamara Behar, owner of Tangerine Hot Power Yoga in New York City, told Mic. The heat is just another "prop" to help you open up — no different than a block or a strap.

Sweating can also make you feel lighter if you're feeling bloated, like when you're on your period, Behar said.

Unlike some other hot yoga practitioners, Behar isn't convinced that sweating releases toxins from the body.

"I like to not even go there about the detox thing," she said.

The biggest reason Behar keeps doing hot yoga — and why her clients keep coming back to class — isn't for any sort of physical cleansing, but rather the emotional cleansing that comes with intensely sweating through an hour-long class.

I think that's why I liked my first hot yoga class so much, and why I've gone back a number of times since. After an anxiety-packed day at work, the thick drops of sweat that hit my yoga mat feel like a physical embodiment of stress leaving my body. At the end of class, I can leave my worries behind in the studio — albeit in the form of a smelly puddle.

Hot yoga certainly has mental and physical benefits. But when it comes to describing them, "I would never," Behar said, "use the word 'toxins.'"