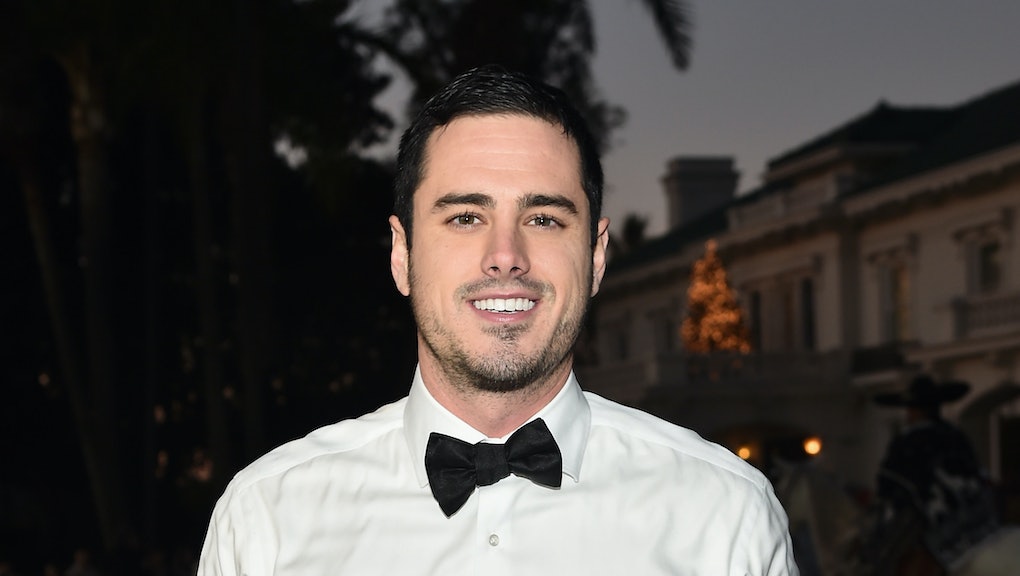 'The Bachelor' Season 20, Episode 1 Recap: Lace-d Up and Ready to Go

Brace yourselves America, because The Bachelor is back and Ben-er than ever. This season, the dating reality show's 20th, features humble hunk Ben Higgins as the titular bachelor. On Monday night's season premiere, we got our first glimpse at the 28 women who will be competing for his heart and for a shiny diamond ring.

Ben first showed up on the show last season when he tried (and ultimately failed) to win over Bachelorette Kaitlyn Bristowe.

Ben always seemed to play the "nice guy" in a season of jealous rivals (ahem, Nick and Shawn) and it seems like his season will continue to show off his super-sweet persona. Ben spent a lot of the season premiere talking about how much he loves his parents and telling all the girls how lucky he was to be there.

The premiere kicked off with a visit to Ben's hometown in Indiana and the usual heartfelt introspection. Basically Ben has been rejected before, he's worried he's "unlovable," he really wants to find the right girl and settle down, etc.

Then we got to the good stuff: The contestants started rolling up to meet Ben and get settled in the mansion (when do they bring in their luggage?!). As usual, there were some hilariously wacky and desperate attempts to make a memorable first impression.

One girl showed up with a giant rose on her head, one girl jumped straight into Ben's arms, one girl brought her mini-horse along and one girl gave Ben a save-the-date for... their wedding. Also, there are 22-year-old twins from Las Vegas named Emily and Haley who will be competing separately. But they look exactly alike, and can maybe read each other's minds.

Once the cocktail party got going, the drama kicked into high gear. First off, the twist. Two contestants from a previous season showed up and asked host Chris Harrison if they could be on this season. Security at the Bachelor mansion must be pretty lax if all these old contestants keep showing up at the parties, right?!

This season's gals were not happy to see former contestants Amber and Becca (who is still saving her virginity for the right guy) and complain they already had their chance at love. Sorry ladies, they're here to stay.

Everyone began to show their true colors after a few glasses of wine, and here's the deal: Jubilee is cool and also said being on The Bachelor is more stressful than serving in a combat zone, Amanda the dentist is intense and her first flirty move was to question Ben about his flossing habits. Also there are too many Laurens this season. Seriously, there are like five Laurens.

Olivia pulls Ben aside and basically tells him that she gave up her dream job of being a news anchor to come on The Bachelor which is sooo romantic that later he gives her the first impression rose.

And then there's Lace. Ohhh, Lace, where to start with you, girl. It's only the first night and Lace is already super jealous. She gets tipsy and starts pulling Ben aside for lots of private convos and trying to kiss him. She says she needs Ben to be paying more attention to her, which is really hard considering he's trying to date 28 women at once. All the other girls think that Lace is trouble and they are probably not wrong.

Soon it's time for the Hunger Games rose ceremony, during which everyone who gets a rose tries to whisper "thank you" as quietly as possible. Ben says a sad goodbye to a bunch of girls, including one of the Laurens. Sorry ladies, you were just too mild-mannered and down to earth to survive in the wild world of The Bachelor.

Lace gets a rose though, because of course she does. Immediately after the ceremony she pulls Ben aside to tell him he didn't make enough eye contact with her. Stare straight into her eyes, Ben! Lace is definitely going to be painted as the "villain" of this season.

The exciting preview of the drama that will unfold on this season of The Bachelor promises plenty of awkward group dates, Ben crying at least once and some loud make-out sessions in hot air balloons and other exciting modes of transportation. But there are still plenty of unanswered questions, like where is the mini-horse going to sleep? Will Shushanna ever speak English? Will our Benny-boy ever find his wife?! Only time will tell.