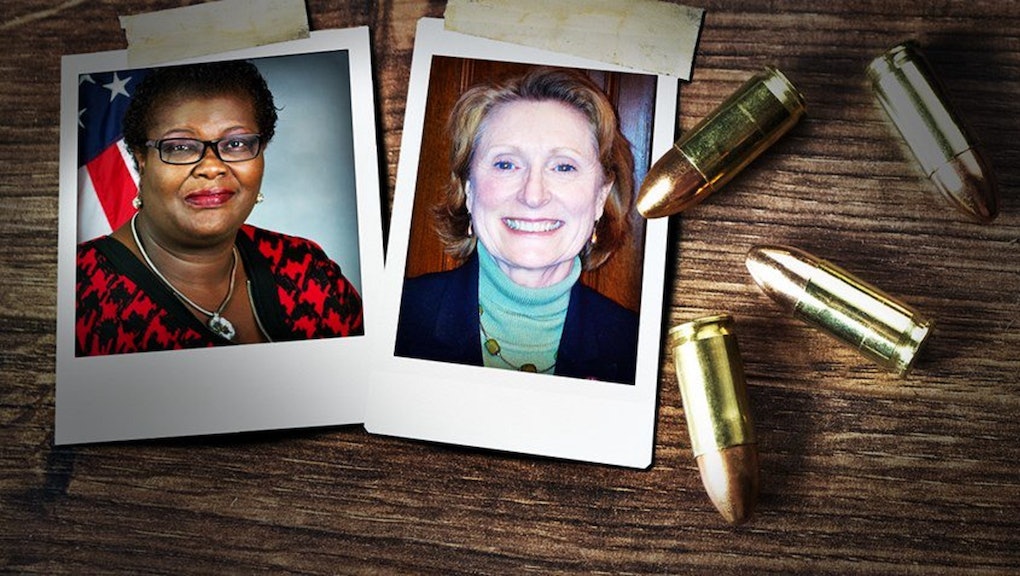 The same week that President Barack Obama invoked the 2011 shooting of United States Rep. Gabrielle Giffords (D-Ariz.) and 18 others, six of whom died, during an emotional announcement speech for executive actions on gun control, the nation's biggest pro-gun rights lobbying group sent out an image of two New York state legislators with bullets placed next to them.

New York state Sen. Roxanne Persaud and Assembly Member Jo Anne Simon appear in the image that was tweeted out by a National Rifle Association publication. It appears to symbolically target them for their sponsorship of legislation that would restrict the state's gun owners to "no more than twice the capacity of their weapons every 90 days," according to the New York Daily News.

The image also appeared on an opinion column posted to the online version of the NRA's magazine, America's 1st Freedom. The editorial argued, "New York gun owners should make sure their representatives know how strongly they oppose this ridiculous assault on their rights."

"In truth, this is one of the most ridiculous anti-gun schemes I've seen in some time," writes Freedom editor Mark Chestnut in the op-ed, saying the proposed legislation was the result of personal animosity. "Anyone who shoots on even a halfway regular basis knows that a single training day at the range requires far more than just a handful of ammo. But Sen. Persaud and Assemblywoman Simon simply don't care about that — they greatly dislike gun owners and want to make life harder for them, to hell with the consequences."

There's no suggestion in the article that gun owners make that point violently, other than the bullets superimposed on the images of the two lawmakers.

However, Simon told CNN the image was "clearly" supposed to be "threatening and intimidating," while Persaud told the network, "If the NRA is so interested in our process, they should reach out to us."

New York City Mayor Bill de Blasio weighed in with a strongly-worded response on Twitter, while NYC comptroller Scott Stringer implored the Justice Department to "immediately investigate" the post, according to CNN.

On Tuesday, the NRA responded to Obama's executive actions by writing they were "ripe for abuse by the Obama Administration, which has made no secret of its contempt for the Second Amendment."