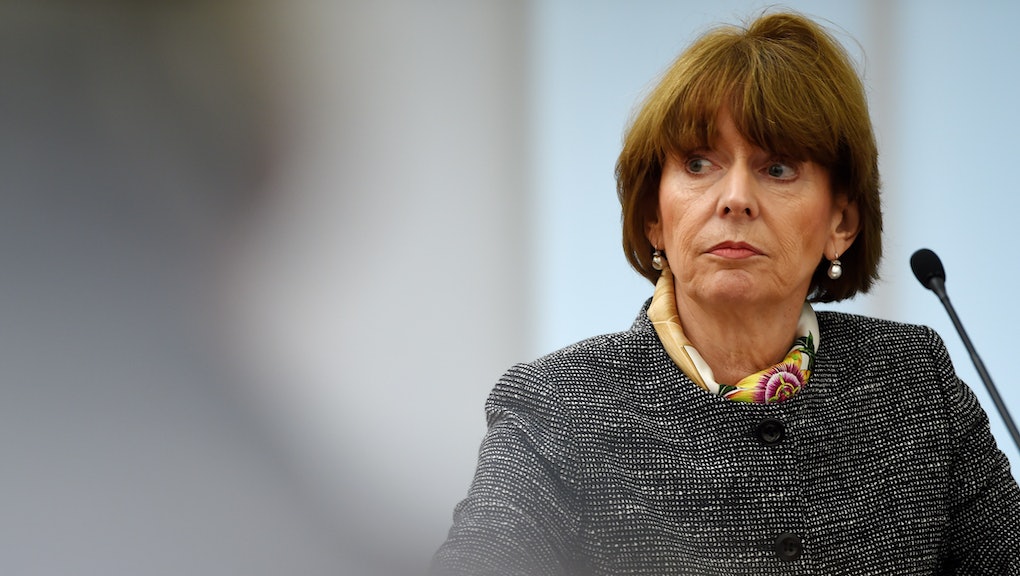 Authorities in Cologne, Germany, could have responded to the attacks of an estimated 80 women at the hands of a gang of roughly 1,000 men in the city on New Year's Eve in a myriad of ways. Mayor Henriette Reker, however, opted to join an illustrious historical club: victim blamers.

Though the incident went largely unreported for days, the scale of attacks — which occurred near a major railway station in the city — were a "completely new dimension of crime," the city's police chief, Wolfgang Albers, told the BBC on Tuesday. Many women were robbed, at least one woman was raped and countless were molested, including a volunteer policewoman, in what appeared to be an "organized" gang effort, according to the same report.

Rather than focus on the astonishing number of criminals involved in the incident and the broader issues such violence points to, however, Reker determined women, such as those who were randomly attacked days ago, are the key to a solution. In order "to prevent such incidents from ever happening again," Reker proposed that women adhere to a "code of conduct," the Independent reported on Tuesday.

This code would require women to remain "an arm's length distance from strangers" within their own group, and encourages women to ask bystanders or witnesses to help should they feel threatened, according to the same report. In the future, women would do well to be aware of the potential dangers of events conducive to drunkenness, the mayor reportedly added.

Reker is hardly the first to address the crime of sexual assault by interrogating survivors. An Indian politician inspired outrage after claiming women are "responsible to an extent" for rape in 2014, the BBC reported. A Toronto policeman notoriously launched the anti-sexual assault movement SlutWalk! after stating that "women should avoid dressing like sluts in order not to be victimised," the Guardian reported in 2011.

Studies show this mentality is common well beyond authority figures: One 2015 study commissioned by the Australian government found that women are blamed for aggression they experience, while the same behavior is considered a "rite of passage" for men, the Sydney Morning Herald reported in November. In a 2010 survey in London, 54% of women who responded said victims should be held at least partially responsible for their rapes.

What's more, when attention has been publicly paid to attackers, it has been based less on their actual behavior than their perceived identity. In the wake of the recent influx of refugees in the nation — the nation estimated it would receive over a million refugees in 2015 — many have emphasized to Cologne's chief of police's statement that the attackers appeared to be Arab or North African. While there have been multiple reports of rampant sexual assault within refugee communities, there is no official confirmation that attackers were refugees.

While much remains unrevealed about this horrifying act of mass violence, the response makes one thing clear: The perpetuation of age-old attitudes that hold survivors to blame are not just detrimental, but an ineffective approach to prevention.