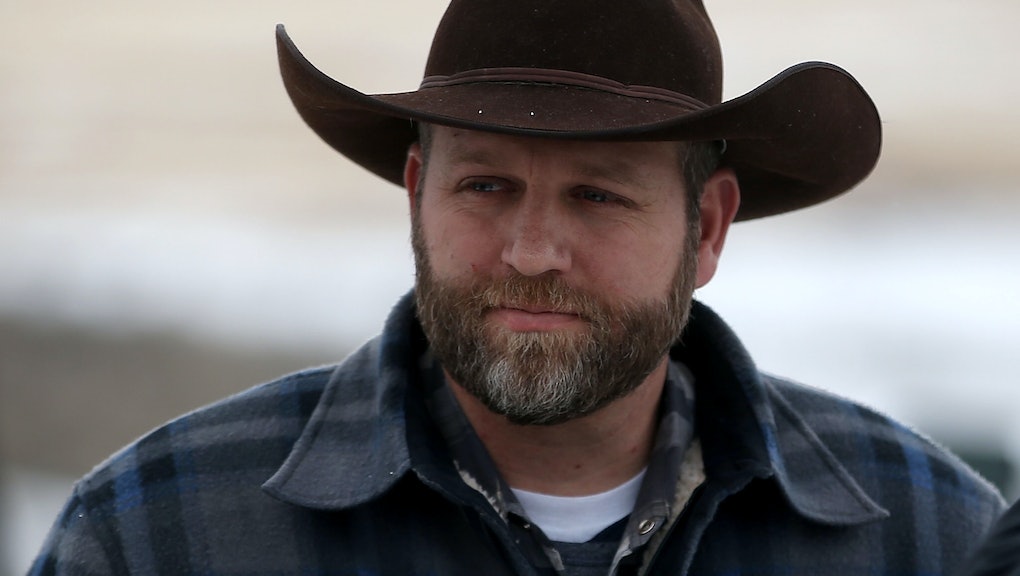 Jan 6, 2015, 2:30 p.m. Eastern: Mic has learned that a fake Twitter account purporting to be Ammon Bundy posted the tweet about Rosa Parks. We apologize for the error.

On Wednesday, Ammon Bundy, posted a tweet about the ongoing anti-government standoff led by a group of armed ranchers in Oregon, and Bundy's statement is drawing fire from all who read it.

"We are doing the same thing as Rosa Parks did," Bundy wrote. "We are standing up against bad laws which dehumanize us and destroy our freedom."

The group leader's name has swept through the news this week after being identified as a member of an anti-government group that, on Saturday, stormed a federal building in Oregon. After hundreds marched through the city of Burns, Oregon, a number of supporters took over the Malheur National Wildlife Refuge in an anti-government protest over land disputes. The Oregonian reported that up to 100 armed supporters were occupying the federal building, though its been contested that the real number of occupiers is closer to a dozen or less.

Drawing a parallel between a civil rights crusader and the armed protest did not sit well with Twitter users.

Yet for some Twitter users reacting to the statement, words simply weren't enough to express their outrage.

The dispute concerns ranchers' allegedly unlawful use of state land, including the supposed coverup of illegal deer hunting by setting fire to the pasture where the animals were hunted, in an attempt to conceal the remains.

The state has convicted two ranchers, a father and son named Dwight and Steven Hammond, of arson, according to CNN. The Hammonds say the fire was lit in an attempt to protect from wildfires on their property, and that the government is encroaching on their land rights. Yet according to CNN, Oregon U.S. attorney  Billy J. Williams claims the poaching ruling was just.

"The facility has been the tool to do all the tyranny that has been placed upon the Hammonds," Bundy said, according to the Oregonian. "We're planning on staying here for years, absolutely," he added. "This is not a decision we've made at the last minute."

The fiasco comes at a time of heightened conversation about gun control in America. After a seemingly endless series of mass shootings and gun violence in the U.S. in recent months, President Barack Obama addressed the nation on Tuesday to announce landmark policy decisions about gun regulation in America.

Here's a series of photos of the ongoing conflict in Oregon: