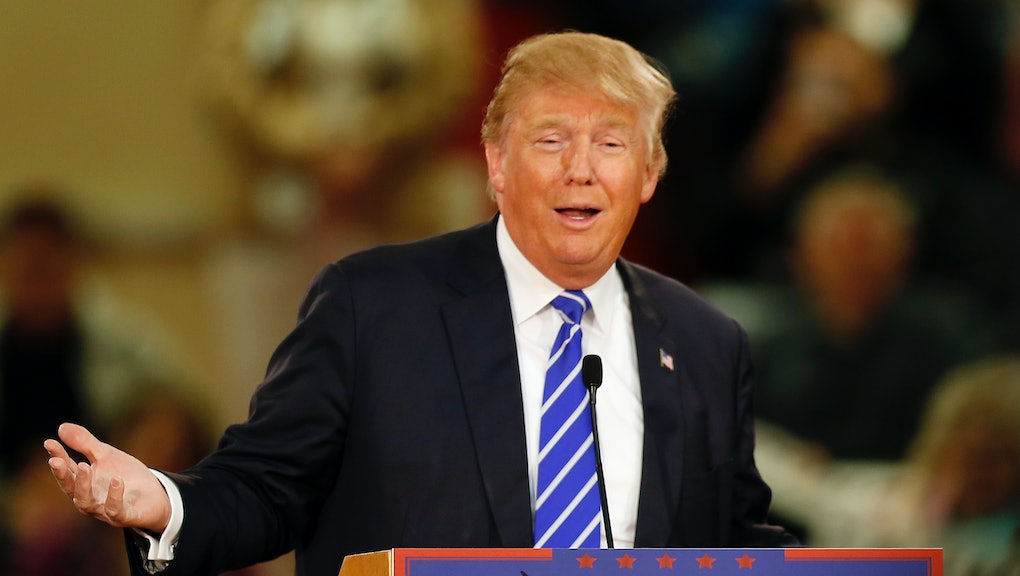 His outrage was about as real as his tan.

Republican presidential frontrunner Donald Trump laughed it up with supporters who made cracks about Muslims and Hillary Clinton at a New Hampshire campaign rally Tuesday night.

The bombastic real-estate mogul was delivering a classically Trumpian tirade against the country's leaders when a man in the audience chimed in, "They're Muslims!" Trump got called out in September for not correcting a rally attendee who called President Barack Obama a Muslim. (Obama is a Christian.)

"I didn't say it," he protested after the outburst from the audience.

Trump opted instead to redirect the taunt at that most beloved of punching bags: the media.

"Oh, I'm supposed to reprimand the man. Who is the man that said that? I have to reprimand him," Trump responded. "How dare you? Now the press can't be angry."

Trump has famously questioned whether Obama was actually born a U.S. citizen, a prerequisite for the presidency.

He's now also chiming in on doubts about the birthright citizenship of Texas Sen. Ted Cruz, who's giving him a serious fight in early voting Iowa. Cruz was born in Canada to an American-citizen mother.

Trump left the Cruz commentary alone at the rally at a high school gym in Claremont, New Hampshire. Instead, he snidely chewed out a supporter who said arch-rival Hillary Clinton was "in the bathroom," an allusion to his wisecrack about her late return to the podium during the last Democratic primary debate.

"That's terrible. I'm admonishing you for the press," he said with heavy sarcasm, according to CNN. "Get him the hell out of there!"

After cannonballing into the presidential scrum in June with a launch speech deriding Mexican immigrants as "rapists" and drug pushers, Trump is still striking a resounding chord with the GOP primary base, according to the latest polls.

Those surveys of the Republican field only bolstered the bravado of a man who's not exactly known for having a self-image problem. He hailed his supporters as exceptionally loyal — regardless of education or pedigree.

"Did you see? One of the things that came out in the one poll, nobody's ever leaving me," Trump said, according to NBC News.

Not, perhaps, the kindest way to characterize the people who might catapult him into a general election duel, but hey: He said it.