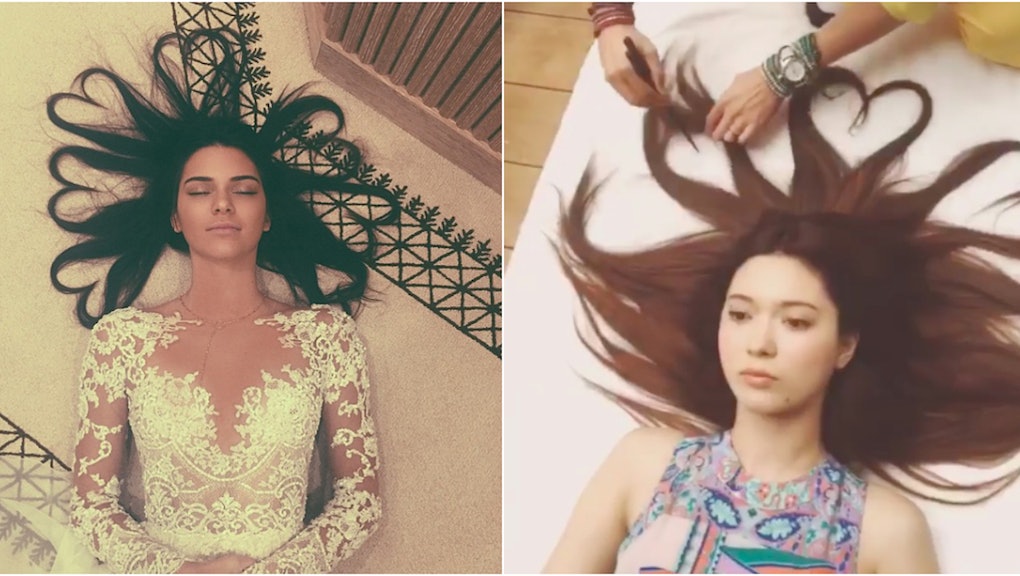 The Most-Liked Instagram Photo of All Time Required a Whole Lot of Help, Apparently

In 2015, Kendall Jenner dethroned her older sister Kim Kardashian on Instagram with this photo:

Jenner's photo of herself lying on the floor with her hair shaped into little hearts garnered so many likes it became the most-liked photo on Instagram — ever. It far surpassed the previous record that Kardashian held for months, from a photo of her wedding to Kanye West.

But for all of the millions of "likes" Jenner's photo received — and continues to receive — it's clear that the photo was a carefully orchestrated shot that required a ton of effort. Just how much? Now we know, thanks to a Tokyo-based stylist who recreated the famous Jenner photo using a pair of chopsticks to get the little heart shapes just so.

Calling out the un-candid nature of Instagram: Instagram isn't known for being the place where "candid" photos rule — even ones that are supposed to look impromptu. Instead, anyone who's ever arranged their wine glass around the plate knows even the most everyday photos are the result of careful organization and prep.

It's aggravating enough that even some of the most popular Instagram "celebrities" have begun calling out the artificiality, in hopes of reminding people that what they see on Instagram isn't "real." They have revealed how much they were paid to post a certain item, they have mocked the apparent ease of certain poses or outfits and they have shown the behind-the-scenes work required to achieve certain looks, as Imaizumi did.

Jenner probably wasn't trying to purposefully fool anyone with her photo. After all, who lies down with hair that falls perfectly into the shape of hearts? But Imazuimi's shoot is a good reminder that a great photo usually takes a lot of work.

So unless we have a team of stylists around, the rest of us can stick to selfies.