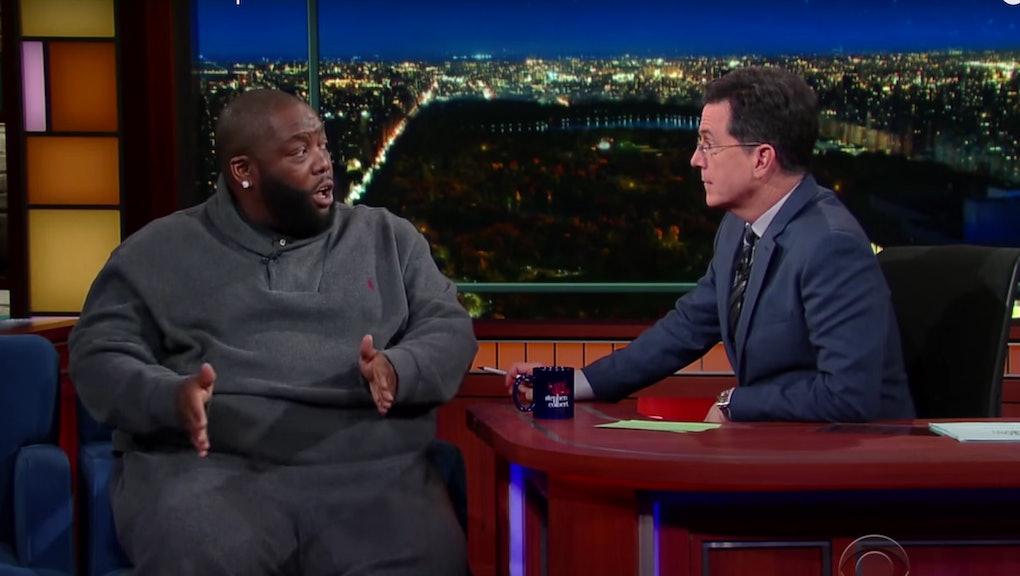 "One of the biggest names in hip-hop, a civic leader and an activist" were the titles Stephen Colbert used to describe Killer Mike, who appeared for an interview on The Late Show Tuesday night. As heavy as those mantles may be, the rapper lived up to every one of them in a conversation that ranged from racist city planning to achievement gaps to Bernie Sanders.

Dressed in his "PTA-meeting outfit," as Killer Mike described it, he proved once again why he's one of the most compelling voices in hip-hop, one who deeply understands the MC's position as a political leader.

After a brief comedic introduction, Colbert dove right in with hard-hitting questions. "If I can speak for all white people," Colbert began, asking Killer Mike to speak for all black people, which Killer Mike agreed to do for the sake of the discussion, Colbert brought up Ferguson, Missouri, Baltimore, Charleston, South Carolina and asked if the awareness raised out of those events has "changed anything, at least in our national dialogue?"

Before answering, he asks all white people to watch Jane Elliott's "blue eyes/brown eyes" exercise, a controversial experiment designed to simulate the creation of an apartheid state, with the aim to prove that prejudice and bigotry are based on arbitrary factors.

"If white people are just now discovering that it's bad for black or working class people in America, they're a lot more blind than I thought," he said. "The same problems that we're discussing today, we discussed in 1990, 1980, 1970 and 1960."

More than just discussing the problems, Killer Mike offered ideas for what individuals in our society can do to help bridge the gap between white people and communities of color, offering a message he often shares during his college lectures. He recommended white, concerned citizens volunteer to mentor young kids of different ethnicities and religions and help them matriculate into college.

"What you're gonna get out of that experience is another human being that's taking full advantage of an educational system that can help them and their community," he said. "But more than that, it grows you as a human being to have empathy and apathy for someone who doesn't look like you and is culturally not from your background."

Of course, Colbert could not let Killer Mike go without talking about his support of Sen. Bernie Sanders. The rapper who spit in 2012, "I don't trust the church or the government — Democrat, Republican," recently introduced Sanders at a campaign fundraiser in Atlanta and hosted a six-part interview with him in at a barbershop.

Killer Mike explained his sudden political optimism by saying Sanders is a living embodiment of Dr. Martin Luther King Jr.'s politics, in terms of his spirit of nonviolence and organizing to support poor workers and anti-war campaigns.

"We can directly elect someone that cares about poor people, cares about women, gay [and] black rights, cares about lives that don't look like his," he said. "This opportunity in history is not going to come in another 20 years. ... If we do not take this opportunity right now, we're going to be sitting around a campfire mad 'cause they've nuked the world to hell, I'm afraid."

Watch the full, enlightening interview below.