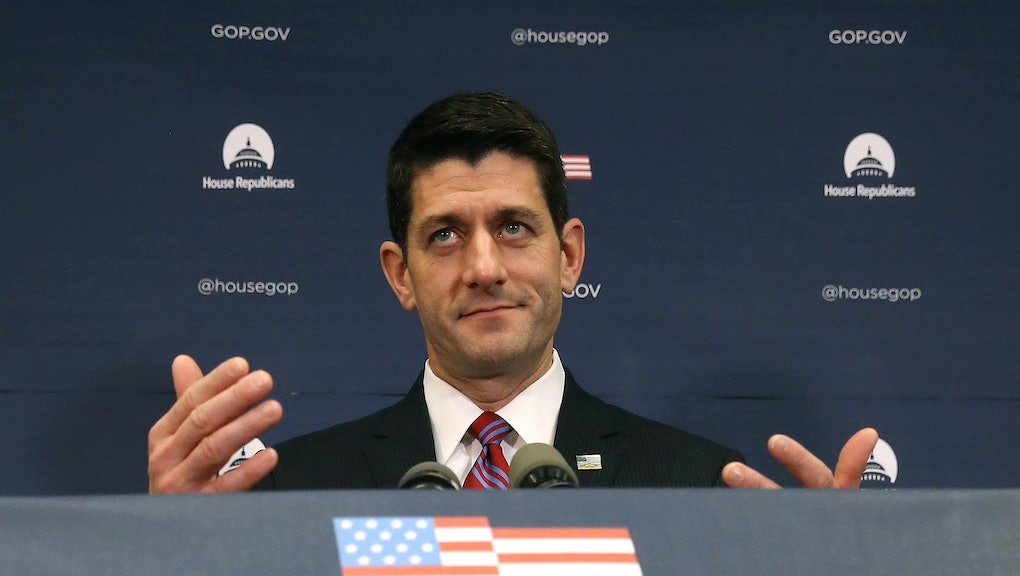 House Speaker Paul Ryan is crowing about his party's mission to roll back the Affordable Care Act, and it doesn't matter a bit if the plan is near-assuredly dead on arrival.

"This is a big deal," Ryan said ahead of the vote on the GOP-backed legislation, which eviscerates the provisions of the ACA and defunds Planned Parenthood. "With Republican majorities in the House and Senate, no longer can [President Barack Obama] hide behind a Democrat-controlled Senate willing to do his dirty work for him."

The measure, which passed the Senate in December, was approved by the House on Wednesday by a vote of 240 to 181. The bill now goes to Obama's desk, where he will veto it. The Republican-controlled House has voted dozens of times to repeal the ACA, the signature domestic policy achievement of Obama's presidency, but Wednesday's vote marks the first time that a repeal measure will reach the president's desk.

It will also show the commander in chief "the hard, honest truth: Obamacare doesn't work," the 2012 vice presidential nominee said. "Higher premiums and fewer choices and restricted access — these are not signs of success. Obamacare is not successful."

Why they keep voting: Republican leaders have openly acknowledged they don't have the votes to override Obama's veto. But just getting the bill to the president's desk is a victory for the Republicans: On top of the House vote, it required some serious legislative gymnastics to thwart Senate Democrats' attempt at a filibuster.

Additionally, Ryan gets to say that as speaker, he's forcing the president to veto a Congressional repudiation of one of the foremost achievements of Obama's tenure and putting the Democrats on the defensive just as the 2016 election cycle ramps up.

"The congressional action is designed to position the party for this year's election," West said. "It won't change current policy, but sends a signal to the conservative base that Republicans understand voter anger and [are] working to undo the Obama revolution."

Missouri Rep. Vicky Hartzler argued that Obama's expected rejection of the bill just underscores the GOP's push to elect "a president who will also go after the cost drivers of healthcare."

"If he vetoes it, he's clearly violating the wishes of the majority of Americans who are being harmed by it," Hartzler told Mic in an interview. She insisted, however, that the bill isn't merely political gamesmanship.

"We're fulfilling what the American people want," Hartzler said, "and whether they're pro-choice or pro-life, the majority of Americans don't want their hard-earned dollars going to abortion providers."

Colorado Rep. Ken Buck similarly told Mic in a statement, "We promised our voters we'd repeal Obamacare. The law is crushing farmers and small businesses, and more Americans oppose it than support it."

"Americans deserve better, and I believe there are many good market-oriented alternatives," he said.

Obama plans to emphasize themes of unity and progress in his final State of the Union speech on Jan. 12, so the Republican assault on his signature legislation comes at a politically inconvenient moment for him and his party. The next question is whether the ideological clash has broader implications as the country chooses his successor.