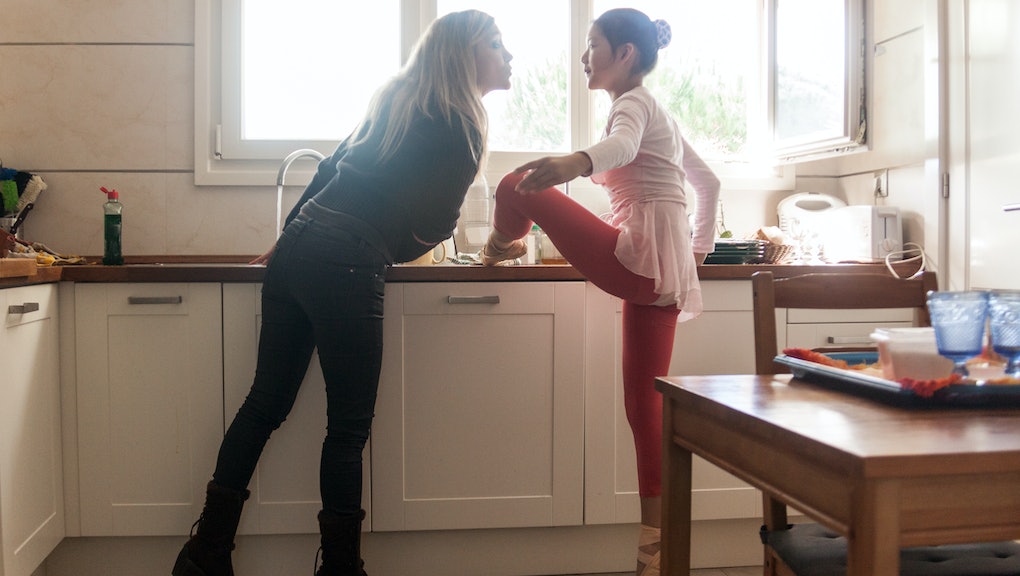 Meet the Single, 20-Something Women Who Are Trying To Adopt Kids

For single women eager to start a family, many are betting on the idea that it will happen for them "someday." They imagine that "someday" includes a thriving career, a supportive and loving partner, a home and a steady marriage.

But what if "someday" never comes?

That thought inspired writer Leah Campbell to first consider the idea of adoption at age 29. After donating her eggs in college, she ran into serious health issues in her mid-20s that led to a "now or never" fertility sentence. After two failed rounds of in-vitro fertilization with a sperm donor, $30,000 down the drain and no hope of ever carrying a child on her own, Campbell turned to a new option.

"I had always wanted to be a mother. [...] So I decided that I would rather be a single mother than to never be a mother at all," Campbell told Mic. After beginning foster care classes in January 2013, a coworker of Campbell's mentioned a Native Alaskan expectant mother who was looking for an adoptive parent. In a matter of weeks, 29-year-old Campbell met her brand-new baby daughter.

Campbell isn't alone. With only 26% of millennials between the ages of 18 and 32 married, according to Pew Research Center, and modern relationships becoming increasingly noncommittal, the number of women whose "someday" arrives right on time is dwindling. So it's natural for single, independent and strong women who have always relished the idea of kids to take matters into their own hands — and before they turn 30.

Some women turn to IVF treatment to start their own families sans partners, but others are taking a different path. Meet the single, 20-something adoptive mothers who are redefining what a thriving American family can look like.

Many hurdles to jump: While in past decades, single-parent adoption was considered a last resort fit for children who couldn't find placement in married homes, "systematic efforts to recruit single parents began [...] in the 1960s," according to the Adoption History Project.

Since then, a growing cohort of single men and women have adopted, with about one-third of foster care adoptions being made by unmarried individuals in 2011. Single females made up 27% of those adoptions — 13,331 to be exact — according to U.S. Department of Health and Human Services.

Those single parents turned out to be just as competent as their married counterparts, too. According to the Children's Bureau, research has shown that children adopted by single parents fare just as well, if not better, than those placed in homes with a wife and husband.

But that doesn't mean that it's easy to be a single adoptive parent — in fact, it's not even easy to become one. Research by the Los Angeles Department of Adoptions found that adopting as a single parent is full of hurdles that don't face the typical nuclear family. For instance, it can be difficult to persuade a pregnant mother looking for an adoptive parent that a single 25-year-old woman who makes about $665 a week ($34,580 a year) can provide the same comforts as a settled, married couple with the average yearly income of $91,870. There are still state-by-state laws and agencies that simply won't work with very young parents, single parents or gay parents, and many states require someone be at least 25 before they begin the adoption process.

Plus, the barriers for private adoptions — one in which the birth parent(s) hand-selects the adoptive parent — are fairly prohibitive, forcing some prospective single parents to look elsewhere (as in, outside the United States) for a child.

"Many singles were adopting internationally since it is less likely birth parents would choose a single parent," Lee Varon, adoptive mother of two and author of Adopting on Your Own: The Complete Guide to Adopting as a Single Parent, told Mic.

As Indiana adoption attorneys Steve and Yogi Kirsch explained to one 20-something prospective mother, the chips were stacked against her from the start.

"In order to adopt a baby in Indiana you would have to have a home study done by a licensed child placing agency. The home study involves an assessment of individual maturity, financial security, and the like. I think it is going to be awfully hard for a person in their early 20's to show they have a stable life," Kirsch wrote on his adoption blog, adding:

During her own home study before going with private adoption, Leah Campbell compared notes with married friends undergoing the same adoption process and found they weren't being scrutinized quite the same. "It turned out that I was asked a lot of questions that were far more invasive than they were. Things about my dating and sex life that never came up in their home study at all, for instance," Campbell told Mic. "So I do think single parents are probably under more scrutiny."

Luckily, today there are a number of agencies that specialize in single parent adoption. When Bessy*, who adopted three boys as a single mom at 27, selected her agency, "they were pretty clear from early on both in the promotional materials and in the classes that single was not an issue, so it wasn't something I worried about," she told Mic. "In fact, I was surprised to see even younger single people in the classes."

The makings of a single, 20-something adoptive mom: At an age when many others are still navigating the pitfalls of careers, dating and living away from home, single women who embark on the adoption process tend to be responsible, optimistic and generous by design. They also tend to be financially well-off, or at least very stable.

They are also, as one woman told Bolick, "strong-ass bitches." They'd almost have to be: parenting alone, on a single salary, is no walk in the park. Plus, since single adoptive parents are less likely to be chosen by birth parents, single parents are most likely to adopt "special needs" cases, such as older children, children with disabilities and minorities, according to CBS News.

"You learn real quick that whatever you want you will get the opposite," Bessy, whose children suffer from early childhood trauma and struggle with various mental health issues, including ADHD and bipolar disorder, said. "I think a lot of single people are open to more." But, she added, "Dealing with trauma is hard."

Then there's the stigma of adopting a child at a young age. Despite the fact that 34% of American children grow up in single-parent households as of 2014, some people still have a difficult time swallowing the idea of any young woman actually voluntarily taking on motherhood alone.

"Support from friends and family was the hardest," Bessy said. "'Normal' moms in their 20s aren't questioned, they are able to complain and vent about the difficulties of motherhood. When you take this road of being single you often hear comments like 'Well, you chose this!' or 'Send them back.'"

Prospective young moms get the same kind of feedback. "People keep telling me I am crazy, that I should try to find a man first, or that I should try to have a birth child before I consider adoption, but to me I don't see it as my last choice at all," Marianne, a 24-year-old teacher considering single-parent adoption, wrote on a forum.

It also truly takes a village. In a piece for Women's Health, young mom Brooke Balderson credited her family and friend's support with her being able to adopt at all. Her parents bought her son's first year of formula and her best friend runs a daycare that she takes her child every work day.

Campbell similarly had support from her social group. The week she found out she was bringing her daughter home, she went on a massive rush to baby-proof her home when dozens of friends came over bearing hand-me-downs.

"My biggest challenges often have to do with illness: when my little girl is sick, I sometimes wish there was another adult with me to assess her symptoms, and when I'm sick, it's hard to not have another person in the house to help care for her," she said.

As for dating, Campbell said her attempts to juggle finding a partner with raising a child "have been humorous, at best."

"I wouldn't hate being in a great relationship, but the steps to get there — and the frogs to kiss along the way — are exhausting," she told Mic. "I hate taking time away from my daughter to go out and get to know strangers, and I hate it even more when those strangers aren't anyone I feel any kind of spark with."

"It is a lot to ask someone to take on and I'm not willing to just settle for someone," Bessy said in agreement. "It is difficult trying to date, babysitters are hard to come by and when you already need to ask for help from friends and family to do things like doctors appointments and parent teacher conferences, you feel bad asking them to watch your kids so you can go to the movies."

But finding a husband was never the goal for many of these women — or at least not a "must" on their path to fulfillment.

"I'm content holding out for Mr. Right — as opposed to settling for the 100 Mr. Wrongs I've met over the years — but I'm not willing to let my life pass me by while I wait," Campbell said. By her late 20s, Campbell had found, "I just knew that I was ready to be a mother."