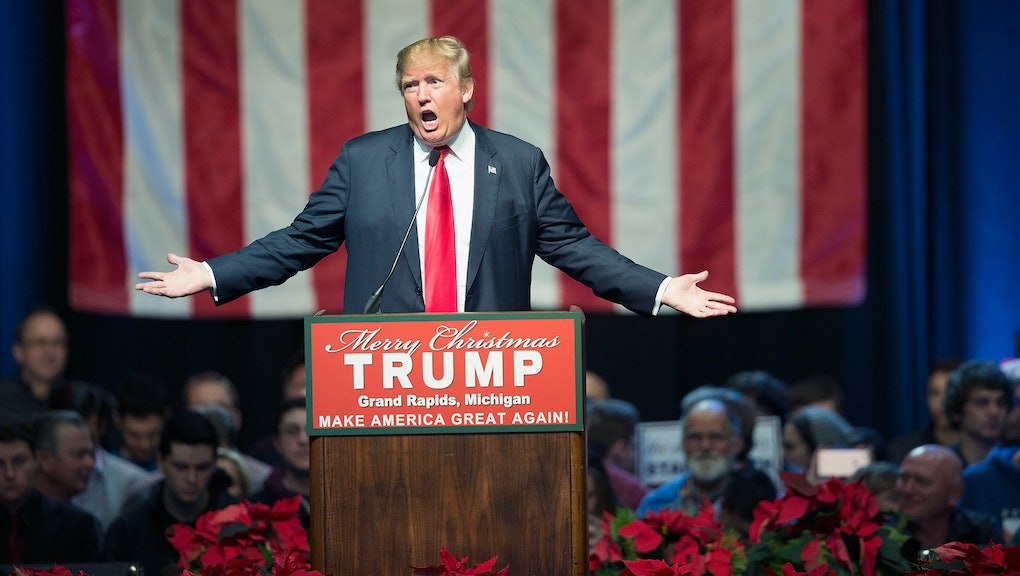 President Barack Obama can put away his birth certificate for a while: Republican frontrunner and habitual pot-stirrer Donald Trump has found a new U.S. citizen to hassle. Trump has failed to overtake Texan Sen. Ted Cruz in Iowa primary polls. His strategy for winning the critical state? To call into question Cruz's citizenship, the New York Times reported. Cruz was born in Canada; because his mother is U.S.-born, Cruz holds dual citizenship. But as Trump alleges, Cruz's Canadian origin could land the candidate in a world of legal trouble, proving a roadblock in his bid for the White House.

"I'd hate to see something like that get in his way," Trump said, according to the Washington Post. "But a lot of people are talking about it and I know that even some states are looking at it very strongly, the fact that he was born in Canada and he has had a double passport."

If a lot of people are talking about Cruz's citizenship, it may be because Trump keeps bringing it up. Trump told ABC News in September that Cruz's U.S. citizenship was valid and a non-issue — now, he's returned to his previous position that the birthplace is a matter of definite concern. What may seem like a grasp at polling straws is in fact a familiar rhetorical tactic for Trump, component of the so-called birther movement that previously targeted Obama (among others), demanding he prove his U.S. citizenship in a misplaced effort to demonstrate his ineligibility for president.

Now that Trump and his supporters have found a new focus, here's a collection of Trump's bolder birther statements, in chronological order.

"He grew up and nobody knew him. You know? When you interview people, if ever I got the nomination, if I ever decide to run, you may go back and interview people from my kindergarten. They'll remember me. Nobody ever comes forward. Nobody knows who he his until later in his life. It's very strange. The whole thing is very strange."

"I have people that have been studying it and they cannot believe what they're finding. He spent $2 million in legal fees trying on to get away from this issue, and if it weren't an issue, why wouldn't he just solve it? I wish he would because if he doesn't, it's one of the greatest scams in the history of politics and in the history, period. You are not allowed to be a president if you're not born in this country. Right now, I have real doubts."

"I've been told very recently, Anderson, that the birth certificate is missing. I've been told that it's not there or it doesn't exist. And if that's the case, it's a big problem."

5. April 27, 2011, at a press conference in New Hampshire, following the White House's release of Obama's birth certificate (the president himself would release his "official birth video" at the White House Correspondents' Dinner on Apr. 30):

"I feel I've accomplished something really, really important, and I'm honored by it. You have to ask the president, why didn't he do it a long time ago? ... It is rather amazing that it all of a sudden materializes. A lot of people have to look at it, experts will look at it."

6. May 29, 2012, during an interview in which CNN's Wolf Blitzer asked Trump to comment on Obama's 2011 birth certificate release:

When Blitzer told Trump that he was "beginning to sound a little ridiculous," Trump shot back: "You are, Wolf. Let me tell you something, I think you sound ridiculous." He continued, "Many people put those announcements in because they wanted to get the benefits of being so-called born in this country. Many people did it."

"I'm off that subject [the subject of Obama's citizenship]. I'm about jobs. I'm about the military. I'm about doing the right thing for this country. I want to make our country great again."

8. Sept. 17 at a New Hampshire campaign stop, where Trump was accused of tacitly confirming one crowd member's assertion that Obama isn't "even an American" by failing to address it in his answer to the man's question, "How do you plan to get rid of Muslims in the U.S.?":

9. Sept. 22 in response to a tweet from Hillary Clinton, which confirmed that Muslims can in fact become president:

10. Jan. 5 to the Washington Post, addressing the myriad legal issues he predicts Cruz could face because of his suspect citizenship status:

"Republicans are going to have to ask themselves the question: 'Do we want a candidate who could be tied up in court for two years?' That'd be a big problem. It'd be a very precarious one for Republicans because he'd be running and the courts may take a long time to make a decision. You don't want to be running and have that kind of thing over your head."

Cruz, meanwhile, issued a pretty solid response in the form of a tweet, suggesting Trump's allegations are akin to him jumping the shark, i.e., making a transparent bid for last-minute ratings.