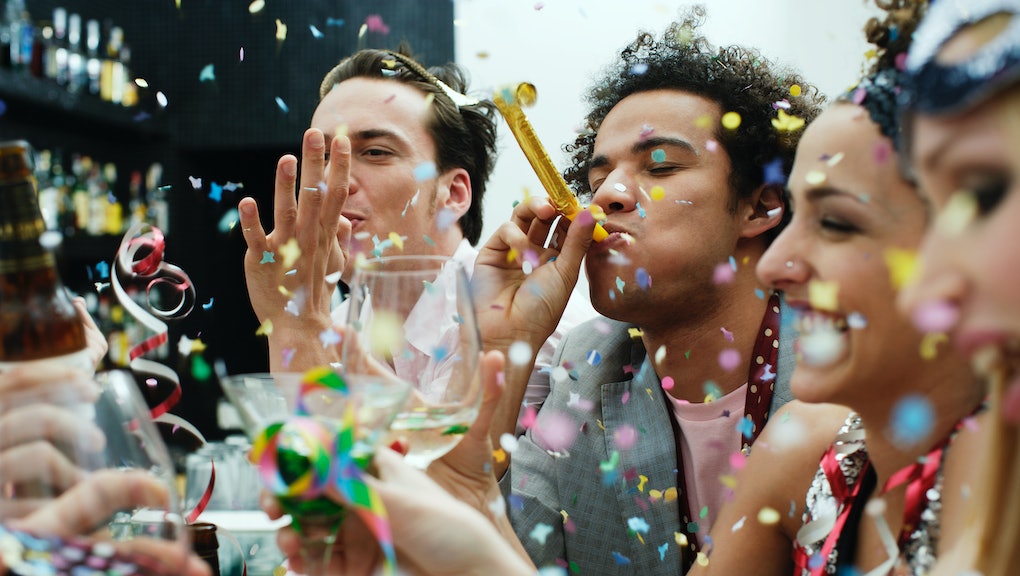 Let's say there's nothing you love more than eating bread and weeping on the floor alone. Or drinking all of Lake Michigan. Or taking a never-ending nap. Or shape-shifting into Matthew McConaughey. Or giving up on everything. Or even making sangria and drinking it alone in your apartment while watching Beans from Even Stevens.

Where would you go to partake in such activities? Look through your Facebook feed, where thousands of users are flocking to event pages dedicated to bizarre, hilarious and ultimately community-creating "gatherings."

The events are, of course, not real. Fifteen thousand people are not going to drink Lake Michigan on Saturday, and it's all but guaranteed that no one is even going to try. But these ludicrous premises have done nothing to stop the event pages from swelling in popularity — which is exactly why they're so beloved.

Abena Dapaah, a 21-year-old University of Delaware student, described the invites as part of a "neo-absurdist movement sweeping the web." Dapaah has played host to a number of such events, including "Get together and have a good cry" and "Watch all five Ice Age movies and convert to satanism," the latter of which is only five minutes long.

"People come together to do things that are so pointless and random in nature that it becomes a hilarious meme," she told Mic via Facebook message.

While some are decidedly nonsensical, most are hilariously morose and self-deprecating. With titles like "Eating alone in the shower," "Not bothering to put on pants every morning because you're not that important" and "Walking around aimlessly pretending to have ur shit 2gether," they have an ironic, nihilistic Daria vibe.

Like Daria, the events also cater to a noticeably young demographic. Many of the hosts and attendees appear to be college or graduate school students, which may also help explain the faux-desperation. According to a number of hosts who spoke with Mic, the trend popped up in late November, in the days and weeks leading up to final exams.

Abena Dapaah, a 21-year-old University of Delaware student, described the invites as part of a "neo-absurdist movement sweeping the web."

"Events like this were probably going viral a month ago since people were trying to procrastinate from studying," Sarah Choh, a 20-year-old New York University student, told Mic. "Since finals were approaching, a lot of people were most likely finding ways to distract themselves and using these funny events as an outlet."

Choh created her own event page, the aforementioned "Make sangria & drink it alone in ur apartment while watching Beans from Even Stevens," which eventually ended up with 13,000 attendees and 20,000 who listed themselves as "interested." Choh told Mic it was born out of boredom because her friends hadn't yet returned from Thanksgiving break.

"I was sitting alone in my room and realized my birthday was coming up," she said. "I actually hate my birthday since I don't like the attention, so I thought it'd be funny to make an event highlighting how I'd rather spend it at drinking sangria alone at home while watching Beans from Even Stevens. I initially just invited 400 people since that's the maximum limit that Facebook allows."

"Make sangria & drink it alone in ur apartment while watching Beans from Even Stevens"  eventually ended up with 13,000 attendees.

Choh's page is a particularly good example of the kind of weird, internet-specific communities that can emerge from these events.

Its wall is full of posts about Beans, a character from the late-'90s, early 2000s Disney Channel show Even Stevens, starring Shia LaBeouf. People from around the world added their own images, memes and polls, and popular posts have gotten hundreds of likes. The event was held on Dec. 19 but was created weeks earlier; Facebook users were posting to the wall up until the day of.

In this way, the events are similar to a subreddit or a Tumblr community, with users who typically don't know each other personally but have bonded over similar interests, opinions or things they find funny. While this concept certainly isn't new or rare — Reddit sees about 160 million regular visitors per month, and Tumblr is the 42nd most-trafficked website in the world, according to analytics firm Alexa — it's an unusual thing to see on Facebook, whose users normally stock their networks with familiar faces.

According to Dapaah, the event phenomenon has shades of another odd Facebook tradition: weird fan pages.

"It mirrors closely the long-ago Facebook phenomenon of fan pages with absurd titles, not for the content, but for the title. For example, there'd be a page titled 'I just want to drop out of school and become a fish' or 'It's called a text message not a novel. Keep it short,'" she explained.

Not all of them are just for fun, however. According to host Sam Foran, "Crying and eating bread by yourself on the floor" ended up partnering with Action Against Hunger.

But even the hosts aren't sure the spectacle can keep going at its current pace.

"In my opinion, the quality of the creativeness for the events decreased dramatically, and I think people just wanted to be famous or to be known as someone who created a famous event," 20-year-old Cornell student Ross Tannenbaum, who created an event called "Stay single forever because nobody loves you," told Mic. "I was just bored and felt like messing around on the internet."

Others were slightly less fatalistic. "No matter how you look at it, it's an internet meme, and like all internet memes, though they never actually disappear, they do lose popularity," Dapaah told Mic. "I, just like many [other] people who create these events, will try to cash in my little bit of internet fame and ride out this trend till it's over."