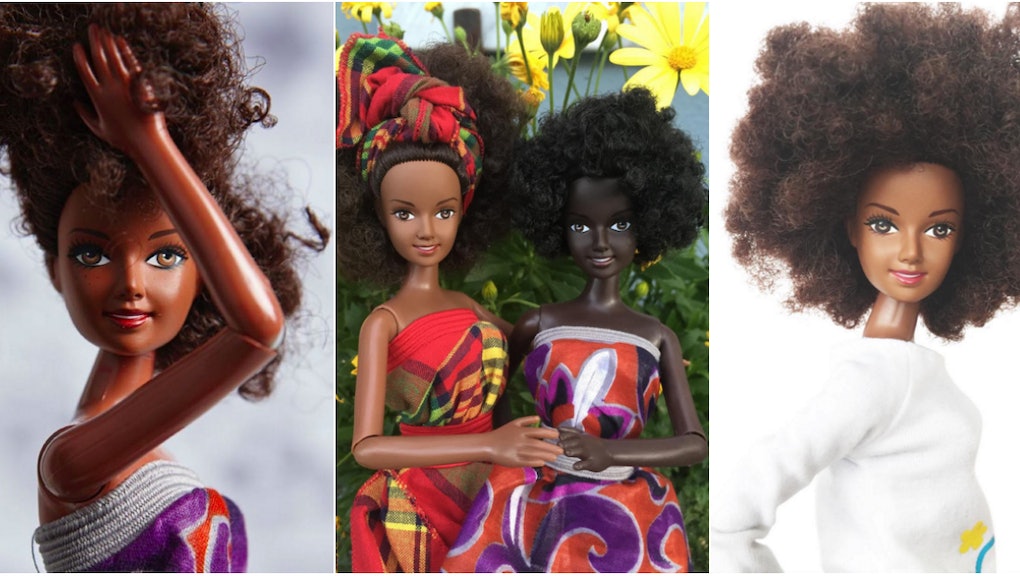 We're seeing slow but steady progress with diversity in the fashion industry. But when it comes to the unspoken ideals beyond industry walls, the beauty standard of fair skin and straight hair still prevails — especially when it comes to the dolls that girls model their standards on before they even pick up fashion magazines.

One model is doing her part to change that with her own collection of dolls. Malaville dolls are sleek like Barbies, with fun outfits and bendable limbs — but their hair is textured, coarse, curly and varied. Their skin colors also vary, from light to much darker brown. And their clothes? It's bright, colorful and specifically African and Caribbean in inspiration.

They're pretty and appealing, especially for little girls who've rarely been given a black doll to play with.

Mala Bryan, who hails from St. Lucia, has been a full-time model for years. But when she was 18, she got her start with dolls.

"I had a dream when I was 18 that I was playing with some Barbies, but never really understood what it meant," Bryan told Mic. "But I started by decorating plastic fashion dolls with artificial flowers and selling them to guests at a hotel that I worked at. Business was great, and my dolls would sell out even before they were made."

"A few years later, I went shopping for toys to give away to some children back in my hometown in St. Lucia but had a very tough time finding black/brown ones," she said. "So I ended up buying only white Barbies — this bothered me a tiny bit, as I wanted to give the children dolls that were more relatable to them."

Her modeling career took off in the meantime, and she set aside the doll project for a while. "But I made note," she said, "that children nowadays are exposed a bit more to race, so the idea of making my own was born."

She got started several years ago, when she looked back into it and found that black or brown dolls with curly hair or afros were still incredibly difficult to buy. Most dolls were white, and the ones that weren't were expensive or rare collectors items.

So she started manufacturing her own, a process that involved picking various shades of brown for the eyes, eyebrow shapes, facial details like freckles and beauty marks and, of course, the hair.

"The focus was for the hair texture, the skin tone and natural/no make to be relatable," she said. "I chose the hair fibers from kinky curls to a loose curl."

The dolls debuted this past year, each with their own names (Maisha, Mala, Malina and Mhina), personalities and colorings. They also have their own "lives" on Instagram, where Bryan is always hashtagging with phrases like  #blackdolls and #afro.

She told Mic the dolls are meant for "children of all races, for black/brown children with Afro/curly hair children to have dolls that they can relate to, and for children of other races to have diversity in their doll collection."

Bryan is just one of many female entrepreneurs to create their own dolls for girls of color. She joins an industry with women like Angelica Sweeting, who wanted to create a different image "for all the young girls who never felt pretty enough because of their kinks, curls, wider noses or fuller lips," as she wrote on her page's Kickstarter.

There's still a dearth of options — American Girl's new doll for 2016 is white and blonde — and children still absorb plenty of negative racial stereotypes from the world around them, from their dolls to their storybooks. But as diversity — and black beauty in particular — are embraced even more, from the fashion industry all the way down to toys, there will only be more dolls like Malaville girls coming down the pipeline.