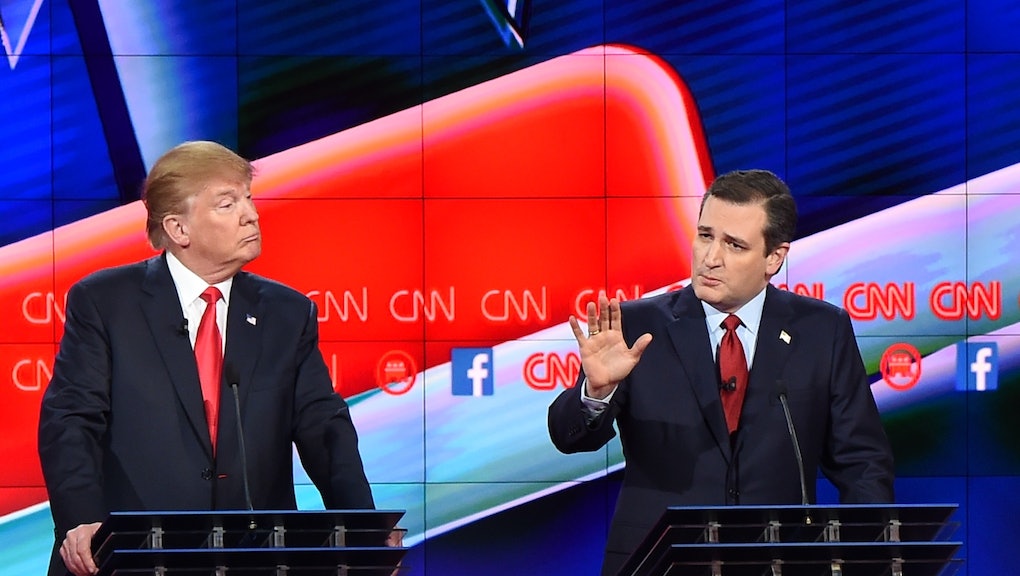 Both candidates are running as hard-liners on the issue, with Trump having launched his campaign with a broadside against Mexican "rapists" and Cruz hammering fellow contender Sen. Marco Rubio of Florida for his leading role in crafting the Senate's 2013 comprehensive reform bill, which would have provided a pathway to citizenship for undocumented immigrants.

But Cruz, Trump contends, hasn't been a consistent warrior in the fight against illegal immigration. Affixing Cruz with what amounts to a scarlet "A" in GOP primaries, Trump told CNN on Wednesday, "Ted was in favor of amnesty. Him and Marco Rubio have been fighting about who's weaker." Politico noted that Trump did laud Cruz for "taking my idea" on building a wall along the U.S.-Mexico border, phrasing that not so subtly depicted Cruz as following Trump's lead on the issue.

The record: While Cruz has never gone on the record in support of a pathway to citizenship — "amnesty" in immigration hardliners' parlance — he did propose amendments to the 2013 immigration reform bill that would have allowed for the legalization of undocumented immigrants, but foreclosed the possibility of citizenship. Cruz now says that he proposed his amendments as part of a ploy to defeat the bill and show "the hypocrisy" of reform supporters.

Murky as Cruz's record on the issue may be, there's a glaring problem with Trump's criticism: The Donald himself, despite his current incarnation as the GOP's leading crusader against immigration reform, has also waffled on the issue.

As BuzzFeed noted in August, Trump met in the summer of 2013 with a group of DREAMers, young immigrant activists brought to the country by their parents when they were minors. During the meeting, Trump reportedly told the activists he employed undocumented immigrants at his golf courses and hotels and appreciated the hard work they did. According to four attendees who spoke to BuzzFeed, Trump concluded the meeting by declaring, "You've convinced me."

That get-together took place in the months after President Barack Obama, in securing a second term, decisively defeated 2012 GOP nominee Mitt Romney among Latino voters, taking 71% of their votes to Romney's 27%, according to exit polling. Many analysts blamed Romney's hard-right rhetoric on immigration, which included a call for the "self-deportation" of undocumented immigrants, arguing that future GOP success demanded a more moderate approach to the issue. Among those who castigated Romney for his anti-immigration stance was none other than one Donald Trump.

"He had a crazy policy of self-deportation, which was maniacal," Trump told NewsMax in November 2012. "It sounded as bad as it was, and he lost all of the Latino vote. He lost the Asian vote. He lost everybody who is inspired to come into this country."