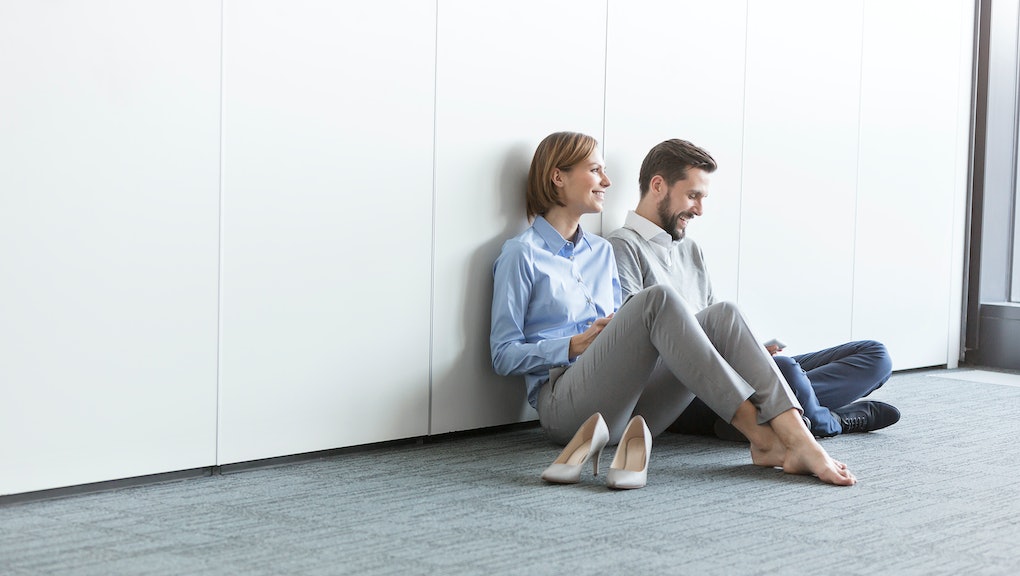 For those who consider themselves "married to their career" but also want to, like, maybe marry someone else eventually, here's an encouraging tidbit: A new study claims that working long hours is not always the kiss of death in a romantic relationship.

Yay for sacrificing leisure/pleasure/joy during the best years of your life in the name of capitalism (or something) but still being able to not die alone amongst piles of paperwork, cat food and romantic regrets!

The study: The findings, published in the December 2015 issue of Human Relations, come from a team of researchers out of Switzerland and Germany who used 285 couples as guinea pigs to test the "conventional wisdom [that] long hours at work dry up employees' romantic relationships at home."

Their main hypothesis was that "optimization" of one's personal life — deliberately investing time, attention and energy into the relationship — is linked to relationship satisfaction.

The couples participated in online surveys where they answered questions about their goals (both professional and #relationship), working hours and relationship satisfaction. The researchers ultimately determined that more career-oriented couples with crazy work schedules still managed to make it work because they were more realistic about what to expect from their relationship, with the long hours forcing them to optimize the rest of their time. So they ended up cherishing the time that they did have together after spending hours upon hours chugging coffee and meeting deadlines at the office.

"When investing many hours in their work — which is crucial in the pursuit of work-related goals — employees seem to be aware that they cannot have it all in their private life," they wrote. "These employees are well prepared to attain an optimal level of goals at work and at home."

In other words, when you really wanna make something work, you'll find the time to make it work and put it first — whether it's a career or a relationship or a binge-watching session of Making a Murderer. (Sup, Dean Strang?)

Let's not totally shit on work/life balance, though. All of this notwithstanding, it's probably still a worthwhile endeavor to not overdo it on the long hours. After all, many past reports have shown that employees who take time to tend to their personal lives and recharge with breaks and vacations wind up doing much better work than the ones who remain chained to their desks 24/7.

Still, for the career-oriented among us who work in industries that sometimes require long hours to get ahead, it's nice to know that it doesn't have to be at the expense of a relationship. (Also, it's nice to have a scientific document to now send to our significant others.)

As for the single folks out there, these findings provide valuable information as well. Now we know for sure that all those "I'm just too busy with work to commit to anything more than casual hookups" guys are actually entirely full of crap. They're just not that into you.