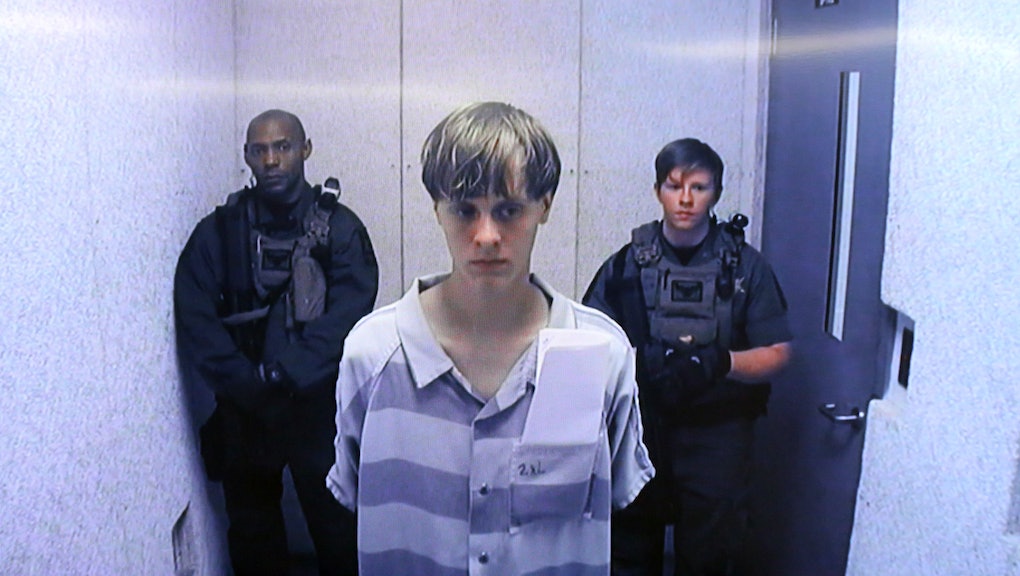 Why Wasn't Dylann Roof One of Dozens Charged With Terrorism in 2015?

One memorable thing about 2015 is that a "record" number of people were charged with terrorism-linked crimes by the U.S. Department of Justice. The Washington Post counts at least 60, including Enrique Marquez Jr. — the neighbor who bought two assault rifles used by San Bernardino, California, shooters Syed Rizwan Farook and Tashfeen Malik in December — and Mohamed Elshinawy, who is accused of receiving $8,700 from ISIS to launch terror attacks in the United States.

Both were charged with providing material support to terrorists, one of four federal crimes listed in the U.S. Attorney's Criminal Resource Manual that explicitly use the words "terrorist" or "terrorism" in their language.

But one name is conspicuously missing from the count: Dylann Roof, the white supremacist who shot and killed nine black parishioners at the Emanuel African Methodist Episcopal Church in Charleston, South Carolina, in June — one of the deadliest domestic terror attacks of the year.

So why wasn't Roof charged with terrorism? The 21-year-old's crimes certainly ignited a debate about what makes a terrorist in modern America, with critics suggesting race — specifically the perceived line between whiteness and Islam — plays a bigger role in applying the "terrorist" label than the actual act itself.

"There's certainly a reluctance to call white folks inspired by white supremacist ideals 'terrorists,'" Heidi Beirich, director of the Intelligence Project at the Southern Poverty Law Center, told Mic, "[even though] the first terrorist organization in the United States was the [Ku Klux Klan]."

This is not a new conversation. In the past year alone, many pundits and outlets, including Mic, have pointed out the hypocrisy of calling brown-skinned Muslim perpetrators of political violence "terrorists," while attributing terrorist acts committed by white people to factors like mental illness or unique individual prejudices. So it was perhaps inevitable the debate would bleed into a legal conversation as well.

Here's how that's going: U.S. Attorney General Loretta Lynch addressed the absence of terrorism charges in July, shortly after Roof's federal indictment. Roof was hit with 33 criminal counts, including hate crime charges. "There is no specific 'domestic terrorism' statute," Lynch said in response to a question about why Roof wasn't charged with domestic terrorism. "However, hate crimes, as I've stated before, are the original domestic terrorism."

She later added, "People may feel that because we have such a strong emphasis on terrorism matters since 9/11, that when we talk about matters and don't use that terminology that somehow we don't consider those crimes as serious. And I want to be clear, nothing could be further from the truth than that."

If that's still confusing, it's partly because it raises another question: Why can you be charged with supporting terrorists, but not be charged for being a terrorist?

Lynch declined to speculate as to whether a federal terrorism charge should exist for cases like this. But in remarks delivered in October, Assistant Attorney General John P. Carlin suggested we don't really need one. "Instead, we have the whole criminal code at our disposal," he said.

Functionally, he may be right. Hate crime, murder, arson and explosives charges — to name a few — are often more than sufficient to secure convictions for alleged terrorists. But rhetorically, the difference is huge for a lot of people.

"Clarity and consistency matter because otherwise authorities give the impression that some 'targets' don't matter as much as others," John Horgan, a professor of psychology at Georgia State University who specializes in terrorism research, told Mic. Indeed, that the U.S. government was willing to launch an entire war on terrorism in Afghanistan and Iraq suggests how seriously they take it.

But for experts across the field, there's no question that what Roof did was an act of terror. Gary LaFree, director of the National Consortium for the Study of Terrorism and Responses to Terrorism, leads a network that keeps a database of more than 140,000 acts of terror committed around the world since 1970.

Roof fits all the criteria, LaFree told Mic. "We haven't released the data for 2015, but [Roof] will definitely be on it," he said.

The U.S. has a long history of right-wing and white supremacist groups committing acts of terrorism against marginalized people, including but not limited to black Americans. In fact, since 9/11, these groups have killed more Americans on U.S. soil than terrorists who claim to be associated with Islam.

Yet as a country, we are still reluctant to label white terrorists as such — both in the media and in our legal language. "It would have been a hell of a political statement to call this what it is," Beirich at SPLC said of the charges facing Roof. And with that, the debate roils on.