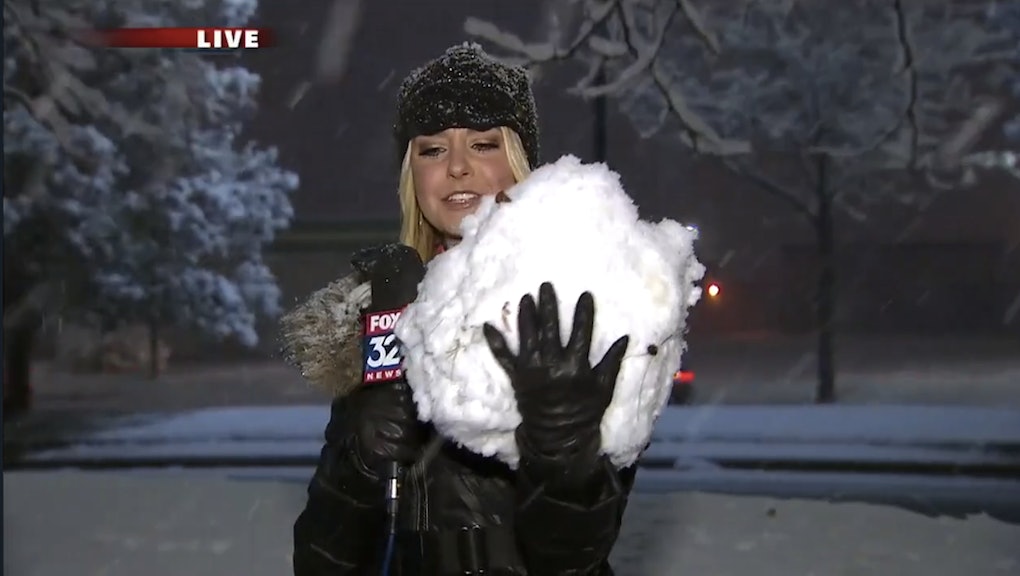 Sorry, ladies: Don't expect to stay warm if you want to be a reporter because the world doesn't just want the news — it wants to see those Pantene tresses.

Or so thinks Good Day Chicago executive producer Dan Salamone, who sent out an email informing female reporters they "look better without hats" and should therefore not wear them on air.

Granted, Chicago isn't known for its tropical climate, but not to worry. Should the temperature reach minus 20 degrees Fahrenheit, then, wrote Salamone, he'd be willing to make an exception.

The story began circulating after columnist Robert Feder, whose blog is published in partnership with the Chicago Tribune, wrote about the directive.

Feder first became aware of it after local Chicago reporter Jessica D'Onofrio, who works for another station, tweeted at him with the scoop.

"I'm pretty sure we can already declare [Salamone] the dumbest TV executive of the year," Feder wrote.

The station, Fox 32, was quick to distance itself from Salamone's order, calling it "absurd."

"That is 5,000% not a station policy," general manager Dennis Welsh told the Independent. "There was a discussion going on about all fashion choices and a couple of hat choices that maybe could have been different.

"Mr. Salamone went and made a very poor judgment and sent an ill-conceived email that addressed a possible way to go, which was when the live shot comes up you would just take the hat off."

Salamone's words are symptomatic of a much larger problem documented by many women reporters who describe the world of broadcasting as male-dominated and sexist.

"I once did a job where I had my hair up in a ponytail," British TV presenter Charlie Webster told the BBC. "I was told that I should take it down for the television and that I needed to look more feminine and more glamorous."

In October, Mexican presenter Tania Reza walked off set after her co-host, Enrique Tovar, began groping her on air. She first said it was a stunt — but after she was fired over the incident, Reza recanted her alleged confession.

"I mean, I wanted to come have this interview as well — that's the reason why I'm here, so... Just to see your eyes for the first time," Gayle began the interview. "It's nice. Hopefully we can win this game and then we can have a drink after as well. Don't blush, baby."

McLaughlin walked away as soon as the interview ended, to the soundtrack of her laughing male co-hosts.

Gayle was fined $10,000 by his team, whose CEO chalked the whole incident up to "cultural differences." Suffice it to say none of these events are likely resolve what is evidently a systemic issue.