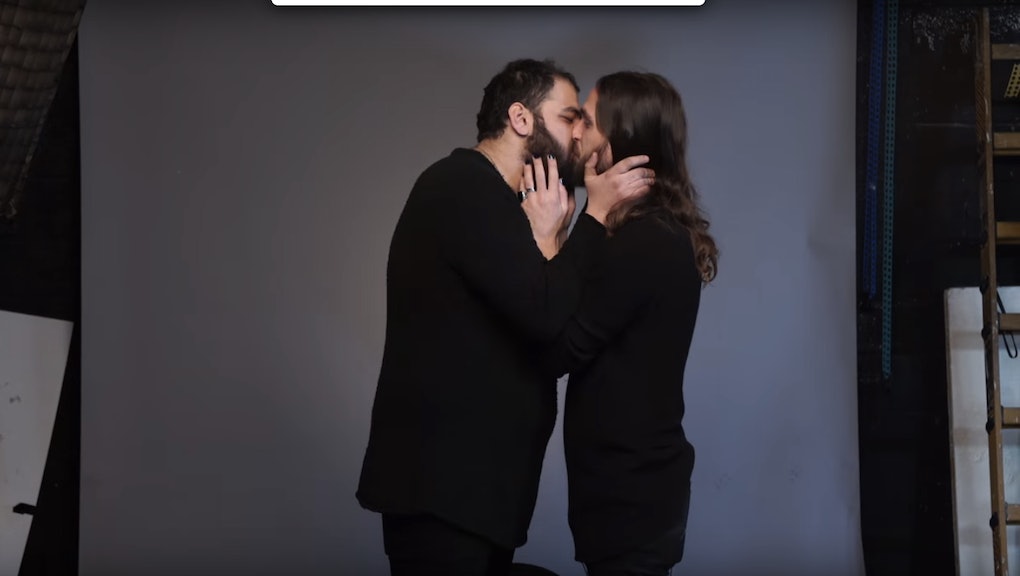 In 2014, a video of strangers kissing called "First Kiss" went viral, spurring dozens of spin-offs and parodies of what turned out to be a clothing advertisement. If the original video's capitalist motivations left you feeling jaded, maybe this new take on it will restore your optimism.

On Thursday, Time Out Tel Aviv published a video of Israeli Jews and Arabs smooching. The pairs consist of friends, lovers and, yes, strangers kissing for a cause.

The video is a response to the Israeli Ministry of Education's decision to remove a novel portraying the love affair between an Israeli woman and a Palestinian man from high schools. According to Haaretz, officials deemed the book — whose title translates to Borderlife in English — inappropriate because "intimate relations between Jews and non-Jews threatens the separate identity."

Ministry officials Eliraz Kraus and Dalia Fenig spearheaded the book ban in December to the protest of the ministry's head of literature studies, Shlomo Herzig. In a letter of appeal, Herzig wrote, "The acute problem of Israeli society today is the terrible ignorance and racism that is spreading in it, and not concern over intermarriage."

He went on to note that the ban goes against the central purpose of literature, writing, "The most horrible sin that comes to mind in teaching literature (and other subjects) is eliminating all or some work which we don't favor out of ethical considerations. In such a situation, there is no reason to teach literature at all. If we would have wanted our students to study only 'respectable' and conservative works, we would be left without a curriculum or with a list of shallow and dull works of literature."

In Amitava Kumar's book Lunch with a Bigot, the author recounts how an essay he wrote in 1999, "Marriage for Peace," landed him on a hit list. In the essay, he tells his Indian parents he plans to ask his Pakistani girlfriend, now his wife, to marry him while the countries were at war.

During moments of political turbulence, loving someone, marrying someone and even kissing someone can be a radical act. Accompanying the video, Time Out Tel Aviv wrote, "Jews and Arabs refuse to be enemies."