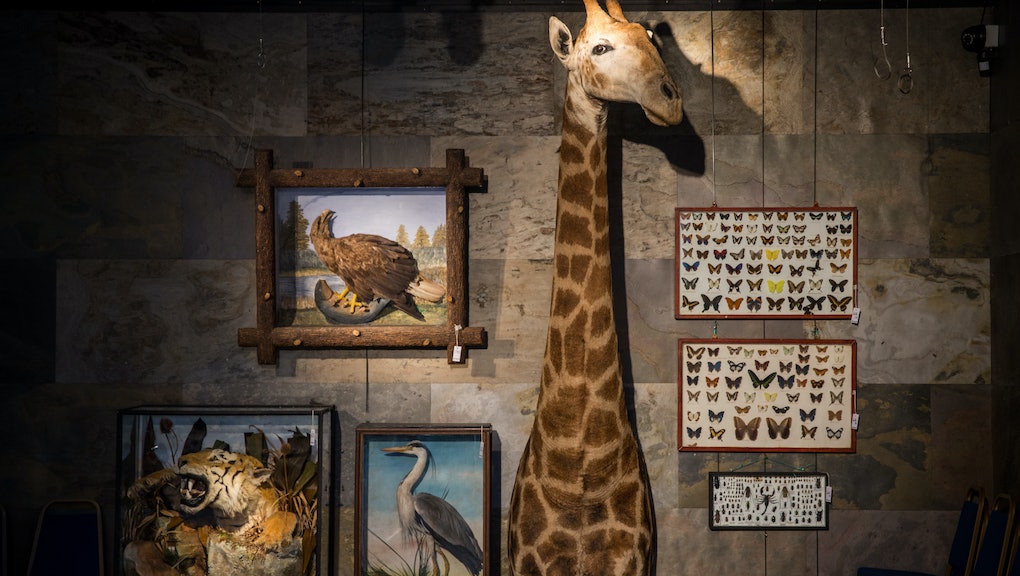 A Journey Into the World of Giraffes, a Subculture for Very Tall Gay Men

Back in 2014, I was on my way to lunch on the streets of Hell's Kitchen when I was handed a business card by an anonymous passerby. It had a measuring stick on one side with a finger pointing to 6 feet 2 inches. It said: "Must be at least this tall to ride this ride," as well as the name of the group: the Tall Gay Agenda.

I was immediately intrigued. It wasn't every day I was approached by random strangers with invitations to join secret societies. Also, I was single at the time and drawn to the idea that in certain social circles, my height (I'm 6 feet 3 inches tall) might be able to aid me in my quest to change that. I proceeded to Google-stalk the group that afternoon and was requesting entry into their private Facebook group by dinnertime.

I quickly learned they were members of a small community of self-professed "giraffes."

When it comes to the phrase "giraffe" itself, it's hard to figure out its origins. Aside from the occasional reference in an obscure blog post, there's little internet evidence that the term is even really a thing outside of the TGA. Even actor Evan Hoyt Thompson, the co-founder of the Tall Gay Agenda, told me he's not entirely sure where it came from.

"I've heard it used [at TGA events], but it's nothing official," he said. "I definitely think it makes a lot of sense in a cute, self-deprecating way."

The TGA started as an inside joke nearly a decade ago. Thompson (6 feet 4 inches tall), his then-boyfriend-now-husband Addison Smith (also 6 feet 4 inches tall) and their mutual friend Justin Ocean (6 feet 2 inches tall) were always hyperaware of their shared elevation when they would go out on the NYC gay bar scene. One night, they joked to some friends that they were the "Tall Gay Agenda," and the TGA's first seed was planted.

They didn't decide to grow that seed into an actual event until two years later — a decision that, interestingly, was influenced by a community of short gay men.

"The inspiration came from 'Runt,' [a] party that used to happen at Nowhere Bar for short gay guys," Thompson said. "Addison had gone to one of these parties and was by far the tallest guy in the room. It was really his idea to do something similar, so we decided to have a gay bar takeover for guys that were 6 feet 2 inches and taller."

So in 2008 they set up shop and threw a party at Nowhere Bar themselves, though they decided to switch venues for the next one because everyone's heads kept hitting the ceiling.

It's fairly well-documented by now that shorter men can come up against various forms of heightism in their daily lives and may even be seen as less attractive by potential love interests, so the value of a party like "Runt" is pretty apparent.

But do tall dudes really need any help?

It's complicated. While research has shown that tall straight guys have an overwhelming advantage in the dating market, a 2014 study about the height preferences of gay men suggests that this privilege doesn't exactly transcend sexual orientation. The authors concluded that 1) height is often perceived as an indicator of dominance, and 2) the majority of gay men just want a partner whose height is more or less comparable to their own.

In the study, taller men tended to be desired most by men who sought a more dominant parter, while shorter ones were most desired by those seeking more submissive partners. But when looking at couples with significant height differences, regardless of power dynamics, the authors ultimately determined that "most men would have preferred to be less tall or less short relative to their partner."

While the findings on dominance might suggest that some gay couples subtly subscribe to certain gender roles typically ascribed to straight couples (i.e. the stereotypical notion that men ought to be bigger/stronger/more masculine than their dainty, short-enough-to-wear-heels-without-issue girlfriends), the fact that most of them wanted to avoid any major height differences altogether is more telling. Perhaps it's a less severe example of the "boyfriend twins" phenomenon, in which gays are creepily attracted to men who could be their clones: Lots of gay men are looking for someone who's (literally) on their level.

"Lots of gay men are looking for someone who's (literally) on their level."

The results of this study ring true to my personal experience. I've often found myself uncomfortable with the level of hyper-dominance some men have expected of me purely on account of my 6-foot-3-inch stature. Also: I just hate feeling like I'm huge. Especially when naked. My first high school "boyfriend" was 5 feet 5 inches tall and although he was lovely, I ultimately felt like a tree next to him. (It wasn't hot!)

So over the years, these experiences have influenced me to place at least some importance on height when dating. When I was single and on OkCupid, I would often filter all possible matches to eliminate men shorter than 5 feet 9 inches tall, reasoning that looking at anyone with whom I had a height difference of more than six inches would simply be a waste of both of our time.

This kind of thinking is likely a big reason behind the TGA's success. (Since the group hosted its first party in 2008, it has grown to about 1,650 members via social media and word of mouth. It currently hosts mixers every month at Hell's Kitchen's Atlas Social Club.)

"Lots of guys tell me we're an answer to a prayer, because they've never seen so many tall men in one place and didn't think it'd be possible for something like us to exist," Thompson said. "Back when I was dating, I would have given anything for Tall Gay Agenda to exist because I've always been attracted to taller guys."

Thompson ultimately found Addison Smith, who would later become his husband (and TGA co-founder), via MySpace back in 2005. He came across his profile by doing a height search for users 6 feet 4 inches tall and up.

Providing a place for tall men to meet tall husbands isn't the TGA's sole objective. More than anything, Thompson said that the group hopes to bring like-minded gay men (and their allies) together to foster a sense of connection that's missing from the mainstream gay bar scene.

"Anyone is welcome at a TGA: men, women, tall, short, in-between," he said. "It's really important to me to create an event where people feel comfortable talking to strangers and making new friends — something that is sorely lacking in most NYC gay bars and the city in general. I don't ever want someone to leave our party and say, 'Nobody talked to me.'"

It's reasonable to expect such instant connection at a mixer where most people have at least two things in common. Simply being tall and gay are daily experiences, and relating over shared experiences is maybe the easiest way to instantly build rapport with others.

Jonathan Katz, a queer studies scholar and professor at the State University of New York at Buffalo, believes that the TGA is emblematic of all such gay subcultures.

"I'd say that all such affirming communities take a page from the queer movement itself," he explained to me in an email. "They take a potentially negative characteristic and transform it into a positive one, a value celebrated and reinforced through a community of the like-minded."

"They take a potentially negative characteristic and transform it into a positive one, a value celebrated and reinforced through a community of the like-minded."

I've only been to one TGA mixer (back in the summer of 2014, shortly after I was given the mysterious business card on the street), but my thought from the experience is that the group is fulfilling its mission. There was socializing, there was flirting. It was a strange experience to stand in a room where every set of eyeballs was more or less within a couple inches of my own, but I kind of loved it.

Whereas my tall stature is usually the one thing that defines me to any given roomful of gay strangers, the TGA gave me a night in which my height was the least unique thing about me. I didn't find a husband there, but I did have a few interesting conversations with people I would have never encountered otherwise, including one very fun older couple that gave me some sage advice about a ballsy tattoo decision I was mulling over at the time.

Plus there was something just so refreshing — and comfortable! — about not having to slouch, bend or look down in order to talk to people. I had never realized how much I did all of those things until I spent an evening not having to do them anymore.

"Being around a bunch of other guys without having to crane your neck to have a conversation really does go a long way toward making guys feel at home," Thompson told me.