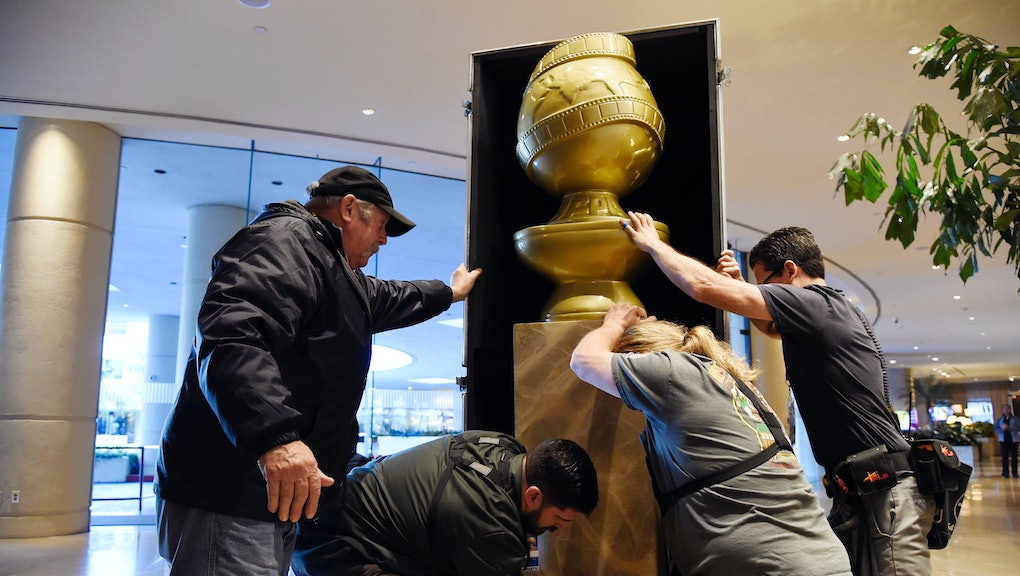 Sunday's Golden Globes will formally kick off the race to the Academy Awards in February. Oscar nominations come Thursday, so the Globes are the last chance to see many of the likely nominees before their crowning as the definitive best of the best by film's highest honor.

But why rush? The Golden Globes are always a drunken blast, and this year's nominees are an unsurprisingly great lot. Let's break down who's looking like a winner, a should-be-winner and more.

One look at this list shows you what an interesting year for film it was. You've got a quiet lesbian melodrama set in the '50s, an out-of-its mind blockbuster, a miserable Western about man versus wild (and bear), a contemporary drama about a woman trying to find freedom for herself and her child and a quick, smart All the President's Men for the 21st century. Of those five, Carol is the most deserving, but it's the compelling Catholic church abuse scandal drama Spotlight that will win out here.

If either Spy or Trainwreck was the only nominee, they'd stand a chance at beating the more prestigious films here. Unfortunately, their "true comedy" cred will cancel each other out, leaving Joy (too miserable for such a light story), The Martian (too fun for such a dark story) and The Big Short (as Goldilocks would say, just right).

Should win: The Big Short

Actress in a motion picture — drama

Blanchett is the true champ here, so striking as a lesbian housewife going through a divorce in 1952, but she'll vote-split with her co-star Mara. Vikander could win, but she's a more likely victor in another category. That leaves it to Larson and Ronan, and the latter stars in a story about an immigrant to the United States learning how to cope and live a new life. A reminder: The Golden Globes are voted on by the Hollywood Foreign Press Association, a group of people from across the sea who have come to the U.S. This should be Ronan's easily.

Actor in a motion picture — drama

Actress in a motion picture — comedy/musical

Schumer will likely cap her stellar year here, while her pal Lawrence's nomination looks more like name recognition than anything else, considering her disappointing work in Joy. McCarthy would be a great choice for a win, but this award should belong to Tomlin. She's fantastic in Grandma, so brazen and hilarious. This is, however, Schumer's victory lap.

Actor in a motion picture — comedy/musical

Apparently, Danny Collins was a well-liked film featuring such big stars as Pacino, Jennifer Garner and Christopher Plummer. Who knew! Anyway, since the Big Short boys are probably going to split votes, this is an easy win for Damon.

Supporting actress in a motion picture

This feels like where the HFPA will feel the Vikander love, though interestingly enough, thanks to how the film's studio is campaigning, she could easily be nominated for The Danish Girl in supporting at the Oscars and win instead. That's quirky and unusual, but not impossible. Meanwhile, in a category that's missing some of its most exciting names (Cynthia Nixon, Mya Taylor), Winslet stands out as superior in a decent, if flawed, film.

Supporting actor in a motion picture

Rylance has won and been nominated for several precursor awards this season. His Globe win will continue to pave his path toward an Oscar, with only Stallone standing a chance of getting in his way with Rocky-reminiscent Academy voters. Shannon is tops in the category, but his turn as a corrupt real estate mogul is a bit too subtle to earn major awards.

Director of a motion picture

Interestingly, while Scott is the likely Oscar-winner, he may lose the Globe to Haynes or Miller. Carol led the nomination count, indicating HFPA love, while Miller executed a daring, surprising vision that rivals (and perhaps even beats) Scott's. Gut guess: It goes to Miller.

Screenplay of a motion picture

Let's pretend for a moment that anything besides Inside Out could possibly win.

Okay, that was a fun moment. Inside Out is winning this in a cakewalk.

Should win: Inside Out

Original score in a motion picture

Unless the HFPA loved The Danish Girl or wants to reward Hateful Eight composer Ennio Morricone, this seems like a safe bet for Carol.

Original song in a motion picture

"Love Me Like You Do" from Fifty Shades of Grey

Aside from the nomination for Sam Smith's weak James Bond theme, this is a strong category. This is probably Wiz Khalifa and Charlie Puth's best shot at a movie award this season — the Oscar feels a bit out of reach for "See You Again," as voters will see its massive success this summer as enough of a reward. "Simple Song #3," sung by Sumi Jo, is easily the best in the category, and will likely triumph at the Oscars, but this is Furious 7's time to shine.

Should win: "Simple Song #3" from Youth

This is almost entirely different from the Emmy list, which speaks to how delightfully off-consensus the Golden Globes went this year. Funny enough, though, it's the only repeat nominee (Game of Thrones) that will probably come out on top. Potential spoiler: Mr. Robot, the buzziest series of the summer.

Kudos to the HFPA for putting together a smart, forward-thinking set of nominees here. The likely winner is the most deserving — Transparent — but keep an eye on Mozart in the Jungle. The category is "comedy/musical" for a reason, and the Amazon series all about the New York symphony may tickle voters' eardrums as well as their hearts.

Actress in a TV series — drama

Davis could repeat her win from the Emmys, or her friend Henson could take home her first bit of gold for playing Cookie Lyon. Give the slight edge to the latter as a reward for one of the most impressive achievements on television in 2015.

Actor in a TV series — drama

Eight years ago, Hamm won a Golden Globe for the first season of Mad Men. Unfortunately, he won during the year of the Writers Guild of America strike, when the Globes ceremony was canceled. He didn't win after that, so this is his only chance to give a well-deserved Globes speech. That said, Moura's show is clearly beloved by voters. This could easily be the space they choose to honor it in.

Actress in a TV series — comedy/musical

What a creative batch of nominees, from cable to network to streaming and comedy to musical to horror. Bloom is the easy critical pick for the overachieving Crazy Ex-Girlfriend, but her network-mate Rodriguez is more likely to repeat her win from last year. The real threat here is Tomlin, a double-Globe nominee this year who's almost sure to lose the best actress in a motion picture — comedy/musical race. The HFPA likes her enough to give her two separate nominations; this is their shot to follow through.

Actor in a TV series — comedy/musical

Aziz Ansari, Master of None

Brief shout-outs to the deserving Bernal, who brings such vibrancy to Amazon's musical series, and Stewart, who is a true-to-form delight in Starz's comedy. But this award is probably going to keep going to Tambor as long as Transparent keeps making new episodes — and he'll deserve every trophy he gets.

Limited series or motion picture made for TV

Outside of a possible win for the very British Wolf Hall, this would seem to be a cakewalk for the critically adored Fargo.

Actress in a limited series or motion picture made for TV

Dunst earned raves for her work in Fargo's second season, but a limited series win may be enough of a reward. Instead, consider the novelty value of giving Lady Gaga a Golden Globe not for singing, but for acting. It's unusual, but some odd things can happen in the limited series/TV movie categories. This feels like the Globes' particular brand of oddity.

Actor in a limited series or motion picture made for TV

Rylance could pull off a double-win here, but Isaac's charm offensive in the Star Wars: The Force Awakens was timed perfectly to the HFPA's voting period. Overall enthusiasm for him will likely bolster his little-seen but spectacular work in the HBO miniseries Show Me a Hero.

Should win: Oscar Isaac, Show Me a Hero

Could King repeat her Emmy win here? It's possible, but the international HFPA may be kinder to the English Frogatt. Light feels frustratingly impossible even though her role was expanded in season two. Interestingly, Tierney is representing as the only nominee from last year's best drama series winner, The Affair. If voters have any love left over for the Showtime series, she could take home gold.

Cumming's appearance is impressive considering The Good Wife was otherwise blanked, while Slater is a worthy co-nominee to Malek. He'll probably be that show's big win, though Mendehlson truly deserves it for doing ace work in a slog of a show like Bloodline.