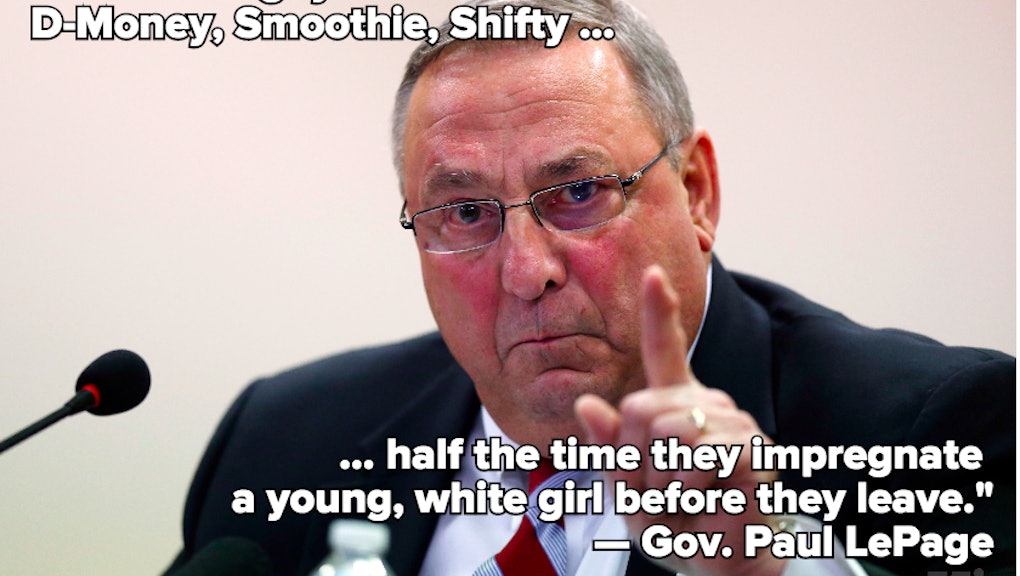 Although Maine Gov. Paul LePage intended on finding solutions for his state's drug problem during a Wednesday night town hall in Bridgton, the Republican's racially charged comments regarding how heroin enters the state stole the show. "These are guys with the name D-Money, Smoothie, Shifty, these types of guys, they come from Connecticut and New York, they come up here, they sell their heroin, they go back home," the 67-year old governor told the audience. "Incidentally, half the time they impregnate a young, white girl before they leave, which is a real sad thing because then we have another issue we have to deal with down the road."

A LePage spokesperson said "race is irrelevant" in a statement to ABC News. "What is relevant is the cost to state taxpayers for welfare and the emotional costs for these kids who are born as a result of involvement with drug traffickers," the statement continued.

LePage is no stranger to controversial statements. In 2011, he disagreed with the Maine Board of Environmental Protection recommendation to ban the chemical bisphenol A in plastics available in Maine, saying, "The only thing that I've heard is if you take a plastic bottle and put it in the microwave and you heat it up, it gives off a chemical similar to estrogen. So the worst case is some women may have little beards," according to Bangor Daily News.

Racially charged comments aren't the only issue the Maine governor has on his plate. According to The Huffington Post, the governor is under fire by Democratic legislators who are calling for his impeachment after he allegedly threatened to withhold an organization's state funding because they hired Democratic House Speaker Mark Eves.