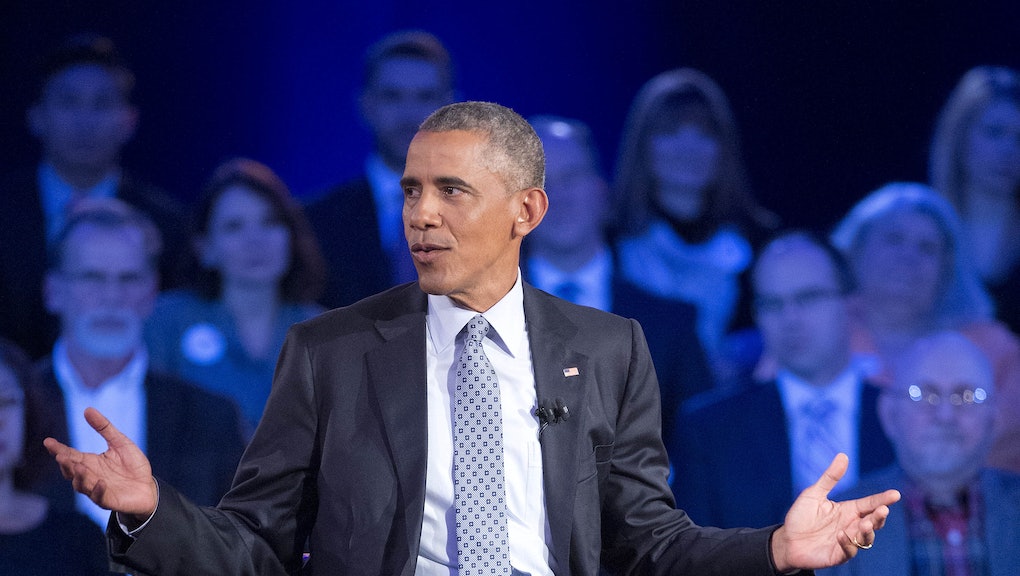 President Barack Obama delivered a forceful defense of his executive actions to strengthen background checks for gun purchasers and oversight of gun vendors, couching the measures in forthrightly pragmatic terms during a CNN-hosted town hall before an audience of gun control supporters, opponents and Americans personally affected by gun violence.

"Look, crime is always going to be with us. So I think it's really important for us not to suggest that if we can't solve every crime we shouldn't try to solve any crimes," Obama said at the Fairfax, Virginia town hall. "And the problem when we talk about that guns don't shoot — kill people, people kill people, or it's primarily a mental health problem or it's a criminal and evil problem and that's what we have to get at. All of us are interested in fighting crime."

Fielding questions from CNN's Anderson Cooper and members of the audience, Obama repeatedly emphasized that the executive actions he unveiled during an emotional address on Tuesday were modest in scope, but necessary steps for a nation plagued by an epidemic of gun violence.

Challenged by rape survivor Kimberly Corban to explain why she shouldn't be able to keep a firearm to protect herself and her family, Obama thanked Corban for sharing her story, reassuring her, "There's nothing that we've proposed that would make it harder for you to purchase a firearm." Obama did allude to research indicating that keeping firearms in the home comes with very real risks, but he noted throughout the town hall that the purpose of his actions was only to prevent criminals from obtaining guns.

Noting that in a polarized America, people often inhabit "different realities" on guns, Obama, never a gun owner himself, sought to forge a cultural connection with pro-gun audience members, relating a story from his days on the campaign trail with First Lady Michelle Obama.

"At one point Michelle turned to me and said, you know, if I was living a farmhouse where the sheriff's department is pretty far away and somebody can just turn off the highway and come up to the farm, I'd want to have a shotgun or a rifle to make sure that I was protected and my family was protected," Obama recounted. "And she was absolutely right."

A summons to action: While Obama spent much of the evening offering a quasi-professorial, utilitarian defense of his actions to ramp up enforcement of gun laws — arguing that it simply made sense to pursue steps that would lead to fewer lives lost, even if many would still succumb to gun violence — he could hardly have ignored the emotional aspect of the issue, particularly with figures like Cleo Pendleton, who lost her young daughter Hadiya to a random 2013 shooting in Chicago, and Gabrielle Giffords, the former Arizona congresswoman nearly assassinated in 2011, present.

Presented with footage of the moment he teared up Tuesday discussing the young victims of the 2012 massacre at Sandy Hook Elementary School in Newtown, Connecticut, Obama recalled the devastating toll that shooting took.

"I visited Newtown two days after what happened. It was the only time I've ever seen Secret Service cry on duty," he said.

Going after the NRA: When Obama shed his own tears on Tuesday, he said, "Every time I think about those kids, it gets me mad." Part of the president's anger, he made clear, was reserved for forces like the National Rifle Association, which has crusaded against the administration's gun safety measures.

"Historically, many in the Republican Party were in favor of background checks, and what's changed is not that my propels are particularly radical," Obama said at the CNN town hall. "What's changed is we've suddenly created an atmosphere in which I put out a proposal like background checks ... and the way it is described is that we're trying to take away everybody's guns."

Chiding the NRA for ducking the event — the organization declined to send representatives to the town hall, despite its headquarters being nearby — Obama suggested the group feared an open debate on gun violence.

"Part of the reason I welcomed this opportunity by CNN to have a good discussion debate about it is because our position is consistently mischaracterized — and by the way, there is a reason why the NRA is not here," he said. "They are just down the street. and since this is the main reason they exist, you'd think they would be prepared to have a debate with the president."

In a particularly piquant moment, Obama derided conspiracy theories, peddled by some gun rights activists, that the administration aims to seize Americans' firearms, challenging Cooper's suggestion that the notion should be taken seriously simply because many subscribed to it.

"Yes, it is fair to call it a conspiracy," Obama said.  "What are you saying? Are you suggesting the notion that we are creating a plot to take everybody's guns away so that we can impose martial law is a conspiracy? Yes, that is a conspiracy. I would hope that you would agree with that. Is that controversial, except on some websites around the country?"

Noting that he only has a year left in office, Obama asked, ""I'm only gonna be here for another year. When would I have started on this enterprise?"

Fighting for public opinion: Following his executive actions on guns, a debate is about all Obama expects at this point. In a New York Times op-ed that went live Thursday night, he conceded that no legislative action would occur during his remaining year in office.

"A national crisis like this demands a national response. Reducing gun violence will be hard. It's clear that common-sense gun reform won't happen during this Congress. It won't happen during my presidency," Obama wrote, adding that he'd wield his influence as president and a citizen to champion further gun safety reform and refuse support for candidates who stymie action.

Just before Thursday night's town hall, CNN released a new poll showing widespread public support for Obama's executive actions, with 67% indicating they backed the president's measures and only 32% expressing opposition. Even a 51% majority of Republicans favor the measures, the poll found, while 85% of Democrats and 65% of independents lent their support.

But the poll found that 53% of Americans disapproved of the president's overall approach to gun policy, while 43% approved, and showed that 57% are dubious that Obama's changes will actually reduce deaths from gun violence, compared with 41% who expect the changes to be effective.

Still, more than three in five Americans think that either Obama's changes struck just the right balance or that he should go even further: 31% said the president had taken the right amount of action, while 30% wished he'd gone further. Meanwhile, 38% of respondents said he'd gone too far.