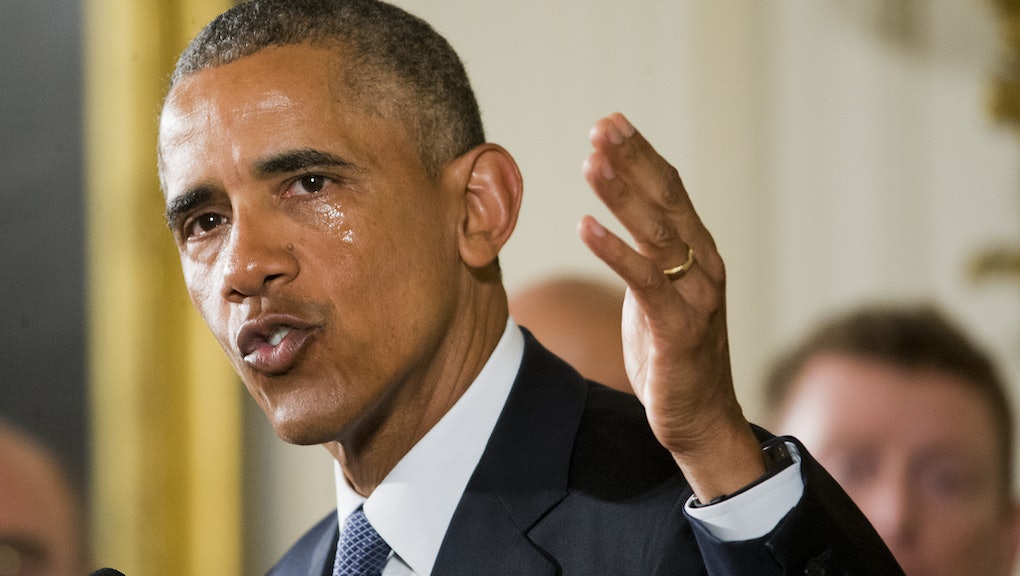 On Thursday night, President Barack Obama published an op-ed in the New York Times, making an argument for "common-sense gun reform," after a week in which he's campaigned for stricter gun control.

It began with Tuesday's press conference during which Obama announced he would use his executive actions to circumvent Congress and close certain loopholes that allow easy access to guns. Then, on Thursday evening, Obama conducted a town hall at George Mason University in Fairfax, Virginia, to discuss the need for such action with gun owners.

The president has said he'll expand background checks, support the advancement of gun safety technology and improve mental health care in an effort to usher in greater gun control.

"We're the only advanced nation on earth that sees this kind of mass violence with this frequency," Obama wrote in his op-ed, referencing the United States' reputation as an outlier in this realm.

"Even as I continue to take every action possible as president, I will also take every action I can as a citizen," Obama explained. "I will not campaign for, vote for or support any candidate, even in my own party, who does not support common-sense gun reform."

He called on Americans to do the same come election season in order to ensure elected officials reflect the 90% of people who support measures like universal background checks.

The president referenced other industries — such as those of cars and food — which are regulated in seemingly obvious and straightforward ways to protect public health.

It is similarly "common-sense" reform the president wishes for the gun industry.

"As Americans, we hold consumer goods to high standards to keep our families and communities safe," he noted.

"Cars have to meet safety and emissions requirements. Food has to be clean and safe," he continued. "We will not end the cycle of gun violence until we demand that the gun industry take simple actions to make its products safer as well. If a child can't open a bottle of aspirin, we should also make sure she can't pull the trigger of a gun."

The reason for such recklessness with the gun industry, Obama argued, is "the gun lobby's decades of efforts," which has held Congress captive and prevented even basic research into gun violence by the government.

Subverting the institutionalized protection of the gun industry will be a long process, Obama wrote, but it's long overdue — and none of the great pieces of legislation, he suggested, have come easy.

"Those moments represent American democracy, and the American people, at our best."