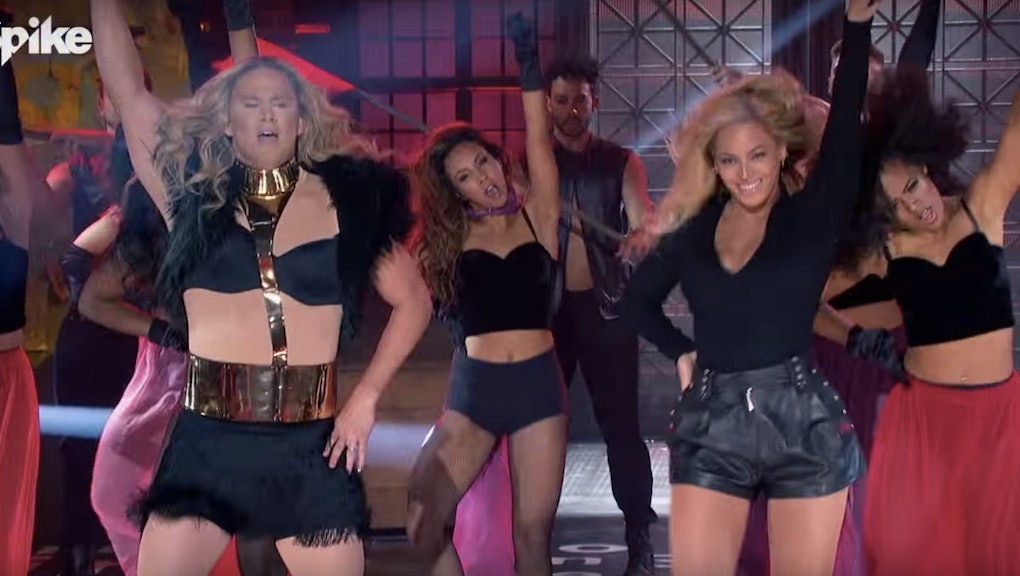 What do you do when you want to "Run the World"? Call on the woman who already does.

On Thursday night's Lip Sync Battle, Channing Tatum faced off against his wife, Jenna Dewan Tatum, in a brutal war of mouthed words. For his final act, Tatum chose to perform Beyoncé's seminal feminist anthem "Run the World (Girls)." Decked out in nearly the exact same outfit as she wore in the video, Tatum shook and bounced with the best of them.

His efforts were admirable, even inspiring, but Tatum can only do so much. He needed support to beat his wife's killer replica of his "Pony" sequence from Magic Mike. He needed to call in the cavalry.

Sashaying out in spectacular style, Queen Bey herself joined the fray, lip-syncing to her own hit and dancing in line with Tatum. It's quite a sight: the hunky actor in drag strutting alongside the queen herself. For all the show's failings when it comes to impressive lip-syncing, Lip Sync Battle is great for these can't-believe-it moments.

Judging by Dewan Tatum's reaction, even she knew in that moment it was all over.

The performance recalled Anna Kendrick's on last season of Lip Sync Battle. While lip-syncing to Jennifer Lopez's "Booty," Kendrick found her own derriere to be insufficient for her battle against John Krasinski. So she called in heavy-duty reinforcements in Lopez herself, who ended the battle just by walking out and posing.

Like Kendrick and Lopez, Tatum and Beyoncé were clearly just enamored with each other's presence. After capping off their performance, Tatum took a moment to bow to his queen. She respectfully snapped in response. They were truly feeling themselves.