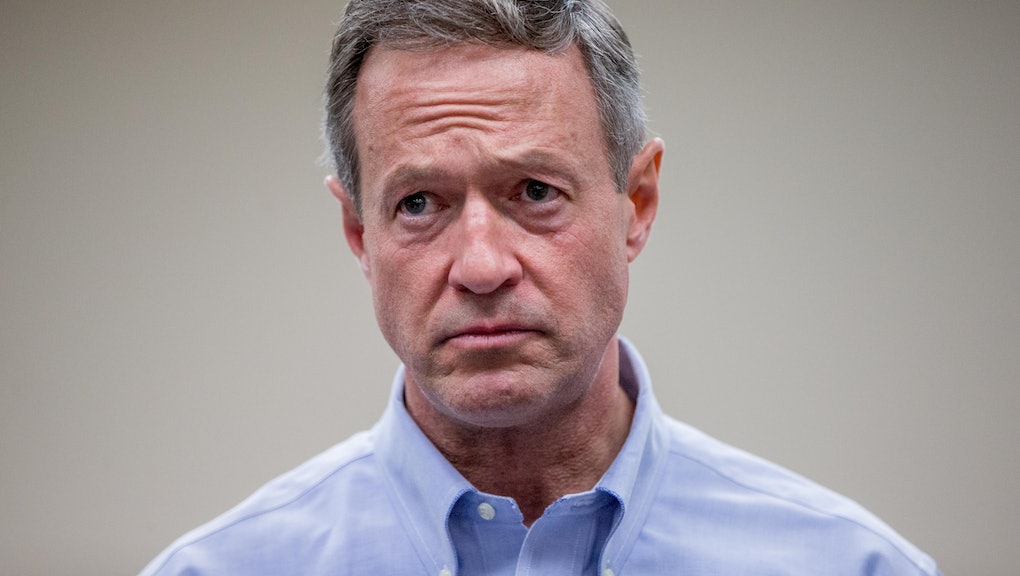 Martin O'Malley Might Not Qualify for NBC's Democratic Debate

Since Sen. Bernie Sanders (I-Vt.) began drawing massive crowds and racking up impressive showings in early-state polls over the summer, the Democratic presidential primary has effectively been a contest between the democratic socialist and frontrunner Hillary Clinton, with long-shot hopefuls Jim Webb, Lincoln Chafee and Martin O'Malley waiting in vain for breakout moments.

Faced with lackluster poll results and following dismal debate performances, Webb and Chafee both abandoned their bids in October, leaving O'Malley as the Democratic race's third wheel. But under debate criteria released by NBC News on Friday, O'Malley may not get to share the stage with Clinton and Sanders when they face off in South Carolina later this month.

To participate in the January 17 NBC News-YouTube debate in Charleston, South Carolina, candidates must average at least 5% support either nationally or in the first three nominating states of Iowa, New Hampshire and South Carolina "in the five most recent polls recognized by NBC News" released before next Friday, NBC said in a statement.

Using the five most recent polls NBC will accept, O'Malley averages exactly 5% support in Iowa, a threshold he fails to clear either nationally or in New Hampshire and South Carolina.

The O'Malley campaign did not immediately respond to Mic's request for comment on Friday.

Meanwhile, O'Malley's Democratic rivals want him in the debate. On Friday, Clinton campaign spokesman Brian Fallon tweeted that "all three candidates should participate in the South Carolina debate":

A campaign gone awry: O'Malley's risk of exclusion from the debate follows a spate of dispiriting developments for his campaign. Last month, Ohio officials announced that he'd failed to gather sufficient signatures to qualify for the state's primary ballot, and this week the O'Malley campaign missed the deadline to run a write-in campaign in the state.

The former Maryland governor also opted in November to accept public matching funds for his campaign, a move that severely restricted his campaign's spending. At the time, Democratic strategist Joe Trippi told BuzzFeed that the move marked "effectively the end" of the O'Malley campaign.