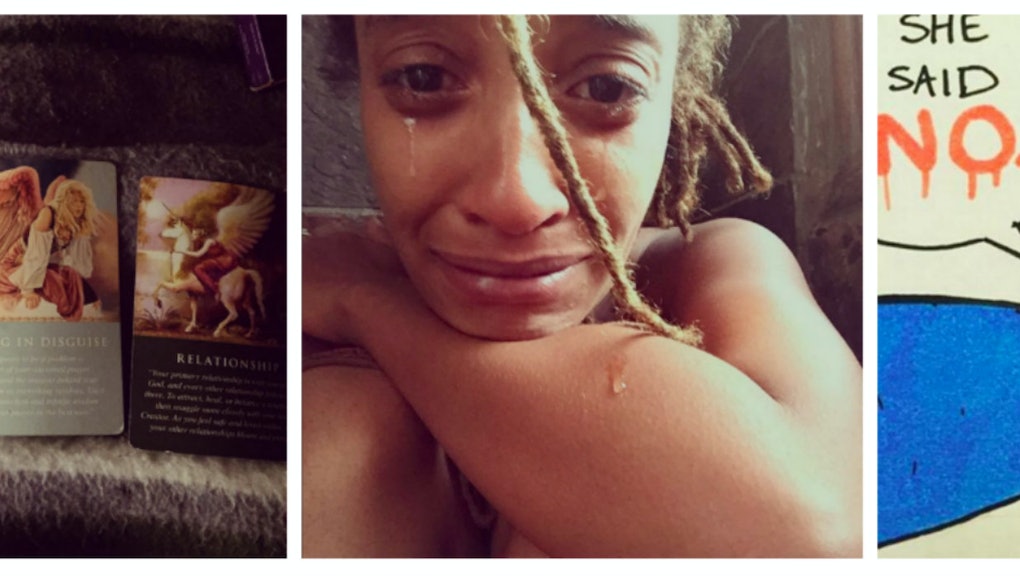 Anti-rape activist Amber Amour shared a picture of herself only minutes after she said she was raped in Cape Town, South Africa.

The Instagram snap, which depicted Amour curled up and crying, was accompanied by an account of the rape, which she said happened when a man she knew invited her to take a shower at a party. She agreed because the shower at her hostel did not have hot water, according to her Instagram.

"As soon as I got in the bathroom, he forced me to my knees," Amour said. Amour said she asked the man to stop, which made him grow more violent, and he penetrated her vaginally and anally. According to Amour, he then put her in the shower.

In the subsequent weeks since the initial post, Amour has posted snapshots of various reactions she's gotten on Instagram comments, both positive and negative.

One commenter wrote: "You are honestly a disgusting excuse of a human. You are the reason actual victims lose credibility."

In the post, Amour responded, "Accusing and bullying someone who just experienced a traumatic event adds to their distress. This is why many survivors don't speak up."

Another commenter wrote, "It's beyond me that someone who was raped before and educates on rape would put themselves in a situation such as this." Another person said, "Thata [sic] like letting a hungry cobra play with ur pet mouse."

When one commenter asked Amour why she did not immediately call the cops, she responded: "Just because someone doesn't go to the cops, doesn't mean it didn't happen." She added, "Reporting rape is almost as traumatic as rape itself."

Amour, who works for the "Stop Rape. Educate" campaign, told the New York Daily News that she needed to tell her story because of her work helping victims of sexual assault.

"I just want anyone out there that has been through this to know that you can definitely get better and can turn your pain into power and that's what I'm hoping to show the entire world," she told the New York Daily News.

Earlier Friday, Amour wrote about her experience in a blog post for the Huffington Post. There, she explained her decision to talk about her rape on Instagram and responded to allegations that she fabricated her story.

"I told the truth, the full truth, because I wanted to convey the message that no matter what a person does, there is not justification for rape," Amour wrote.

In a series of posts on Facebook, Amour mentioned that her alleged rapist had been apprehended by South African police and released on about $75 bail.

Amour also shared why she told her story: "I knew I had to speak up. I had no idea how hard the aftermath would be," she wrote.