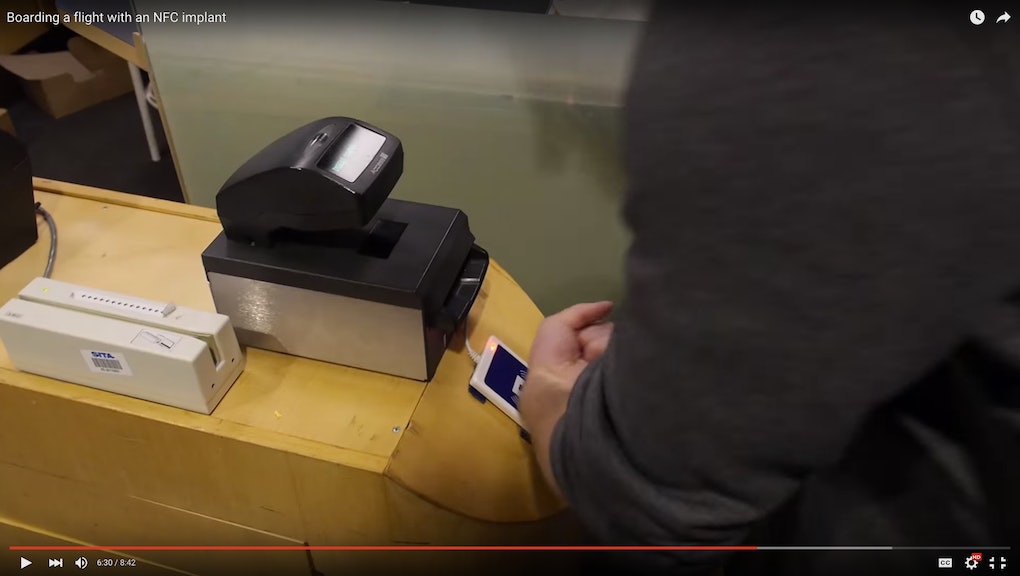 Get ready, world: You can now board a plane using a chip in your hand.

Andreas Sjöström, vice president of digital for technology consulting company Sogeti, successfully passed through security and the gate to his plane at Stockholm Arlanda Airport only using a chip implanted in his hand.

A near-field communication chip can communicate with an NFC-reading device to transmit information. It's similar to the technology that, only last October, tech developer Patric Lanhed used to make digital payments. In both cases, a scanner was able to pick up the information stored in the chip, which is usually a little capsule about the size of a grain of rice.

"I've tried it with public transportation solutions, I've connected it to NFC-enabled door lock systems in offices," Sjöström told Mic of the NFC chip embedded in his left hand. "I've succeeded with some and not with others. But if no one experiments, no one will find this out."

This time, Sjöström uploaded his Scandinavian Airlines EuroBonus member ID to the implant. And since the airport has NFC readers all the way from security check to the gate, he was able to gain access just by pressing his hand to a scanner instead of using a boarding pass or passport.

"The system reacts as if you have the ordinary NFC sticker from the airline, so you're eligible to pass through and it recognizes who you are," Sjöström told Mic.

The video shows Sjöström arriving at the airport, pressing his chip-implanted hand to a reader (kind of like the device you'd use for Android Pay at a checkout counter).

The chip Sjöström uses is an xNT implant from from an American company called Dangerous Things, which produces biohacking and citizen science equipment. It's also what Patric Lanhed used for the Bitcoin payment experiment.

According to Amal Graafstra, CEO of Dangerous Things, Sjöström's experiment was part of Scandinavian Airlines' attempt to further innovate its customer experience, beyond its current program that uses NFC-capable stickers to hold a flyer's vital information.

"The xNT, being NFC compliant, made it so the data could be programmed onto the chip," Graafstra told Mic.

According to Sjöström, this could be huge for the future of air travel, or anything else that would normally need personal information.

"The biggest surprise was the feeling of being able to identify myself without anything other than my body," Sjöström told Mic. "I didn't have to pull out anything. It gave me a new sensation, sort of a pre-notion of what it will be like in the future when we don't have to reach out with physical objects to accomplish things."

But there are some hurdles that may not be avoidable.

"The big issue with the states is that we're much more invested in security theater," Graafstra told Mic. "The whole idea behind NFC is that you go through the process of getting interviewed and validating who you are. There's simplicity. But in the U.S., it's big, bulky imposing machinery that does all kinds of bio-scans. Without that big display of pseudo-security, I don't think it'll work in the U.S."

Airlines aren't exactly lining up to have travel-security agents scanning cyborgs at the podium.

"Boarding a flight with an NFC implant is nothing I plan to do anytime soon with Lufthansa," Twitter user @arnehess wrote on Friday. "Neither do we!" the airline's Twitter account replied.

However, the security of having all of your information stored right under your skin could be proof of principle for more advanced technology used for identification. Graafstra says NFC, while good and simple, isn't very secure, as it's meant to be scanned and read quickly. "We're working on a cryptographically secure options with multiple uses. So, right now, an NFC chip can only really do one thing," Graafstra told Mic. "The next generation could let you store both your flight info and your banking app."

It's only a matter of time before your passport, ID and boarding pass will be just as swipe-able as your Tinder profile.