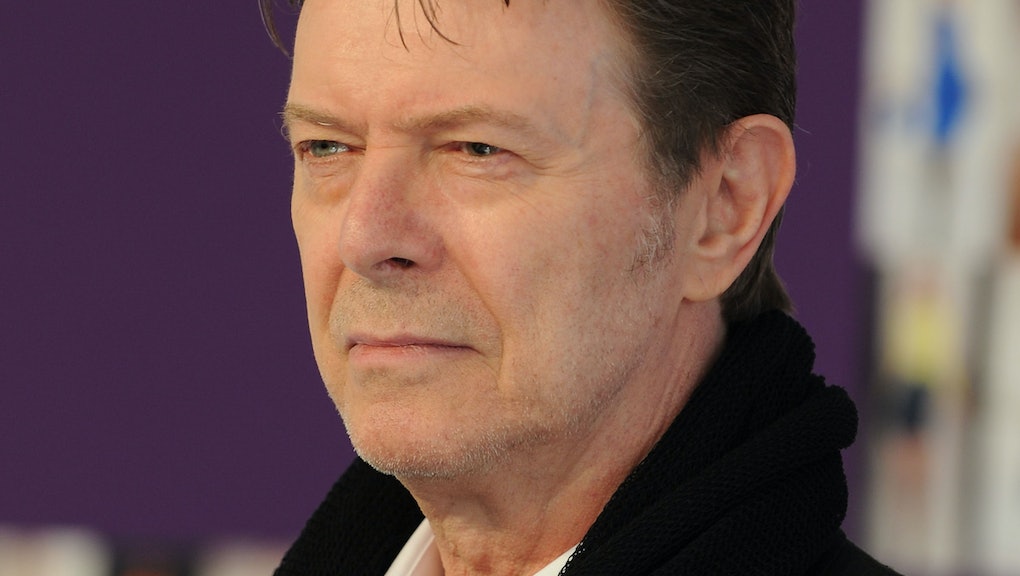 On Friday, his 69th birthday, David Bowie became a jazzman. He's dabbled in the genre before — check the wild piano soloing on Aladdin Sane's title track and the '90s acid jazz of "Looking for Lester" — but never with the reckless abandon that appears on his latest album, titled Blackstar.

Bowie's new studio album embraces the most abrasive and unpredictable aspects of the genre's improvised canvas. He's created a new mixture of avant-garde pop that has been stretching music critics to their limits in their attempts to describe it. "Willfully synthetic and squirmingly alive," wrote the Guardian's Alexis Petridis in his most recent review of the album. Pitchfork gave the album their best new music rating, describing it as the work of a "no-fucks icon, a 68-year-old [no longer] with 'nothing left to lose,' as he sings on 'Lazarus.'"

That song title, also the title of Bowie's new musical, could not be a more appropriate one for this stage in his career. Bowie has died and been resurrected into new creative incarnations innumerable times over his decades of music. In sheer number of transformations alone, he puts the biblical figure to shame. Bowie has had to rely on no other outside force — except perhaps cocaine and the occasional spell — to assume his various personas.

He's been an androgynous glam rock star, a mutant half dog-man, a Martian, a soul icon, a mad aristocrat and so many other batty incarnations. What follows is an ode to some of his most vivid to celebrate the icon on this, the day of his 69th birthday and 25th album release.

David Bowie made essentially zero attempts to ease audiences into his zany act. While his career had several aborted starts, his first major label single and video, "Space Oddity," depicted the artist essentially without eyebrows and with shock-red hair strumming out a space-age folk tune. The song itself is a thinly veiled metaphor for the majesty, promise and destructive fall out of psychedelic drug-induced experience. His fascination with folk was short — though his interest in mind-altering substances was not.

The birth of glam

Bowie's second album The Man Who Fell to Earth saw his sound swerve toward heavier sound, reminiscent of early Black Sabbath and Led Zeppelin — though with a far more polished and elegant veneer. Bowie's music and his outfits from the era, such as the one so beautifully displayed on the album's cover, went a long way in helping define glam's androgynous aesthetic.

One of David Bowie's most well-known personas, Ziggy Stardust, is the platonic ideal of a rock star. A sexually promiscuous drug fiend, he serves as more than an entertainer for his age. He's a "prophet hailing the arrival of a future starman," as Bowie shared in an interview with William S. Boroughs published in Rolling Stone.

In that interview, Bowie also talked some about his creative process and how he designed his act. "I have to take total control myself," he said. "I can't let anybody else do anything, for I find that I can do things better for me. I don't want to get other people playing with what they think that I'm trying to do. I don't like to read things that people write about me. I'd rather read what kids have to say about me, because it's not their profession to do that"

His post-apocalyptic glam visions continued through his next few albums, including Aladdin Sane, with its iconic lightning bolt makeup cover, and Diamond Dogs, his first double album.

For his 1975 album Young Americans, Bowie ditched a good amount of the glamour and over-the-top stagecraft of his glam period and dove deep into making stripped down funk and soul music. He gathered a group of well-established musicians from that community, including Carlos Alomar.

"I didn't know who Bowie was," Alomar told the Daily Mail in 2013. "But I did know this was the whitest man I'd ever seen – translucent white. And he had orange hair. He was thin and weighed about 98 [pounds]. At one point I said he looked like shit and needed some food: 'You need to let my wife make you some chicken, rice and beans and fatten you up.'"

Alomar helped Bowie record his first American number-one single, which he once played on Soul Train in 1975.

In a way, Alomar's description of Bowie would prove prophetic in the creation of Bowie's next character: the Thin White Duke, mentioned in the title track of 1976's Station to Station. Bowie embraced his ghostly pallor and put on a distant, Aristocratic air. His music became similarly cold and electronic for the next few albums. His cocaine consumption reached perhaps its most ravenous heights. Bowie's biographer David Buckley, the author of Strange Fascination: David Bowie, the Definitive Story, insisted the musician's diet at the time consisted largely of cocaine, peppers and milk.

In the '80s, Bowie embraced new wave in a period he called his "Phil Collins years." The artist has largely dismissed this period of his music. However, it did produce the stellar "Under Pressure" collaboration with Queen. He also made Labyrinth with Jim Henson in 1986, which, according to BuzzFeed, provided the sexual awakening of "so many young girls secretly aroused by spiky-haired rulers of goblins."

Bowie quickly tired of the pop scene he landed himself in with his embrace of '80s pop. "Being shoved into the Top 40 scene was an unusual experience," Bowie told the Orlando Sentinel in 1987. "It was great I'd become accessible to a huge audience, but not terribly fulfilling."

He reinvented himself once again by forming a hard rock group called Tin Machine. They played small venues, recording some of the most explosive and aggressive music of Bowie's career. Although short-lived, it was revitalizing creatively for Bowie as music moved into the '90s and early 2000s.

Bowie moved through several more creative phases during the '90s, embracing electronic music in a big way and co-headlining a tour with Nine Inch Nails in 1995.

In 2003, Bowie took a decade-long step back from music, only to return in 2013 with The Next Day. That album offers a far more straightforward rock aesthetic than 2016's Lazarus, but both show a wizened Bowie spouting deep, inscrutable poetry that directs its listener's gaze forward, not back. Neither album is a late-career cash in, and it's unlikely he'll ever attempt one. Bowie's dedication to the creative resurrection is too strong to insult with a move like that.