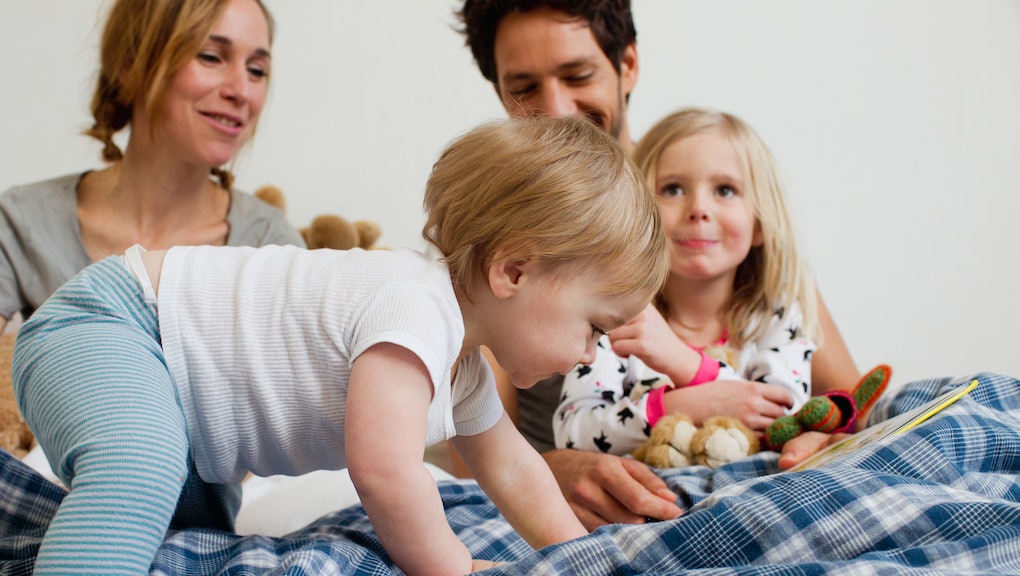 Before most couples have kids, their greatest fear is usually that they'll never have a good night's sleep again.  But according to popular culture, their greatest fear should be that they'll never have sex again. The sexless postpartum marriage is a trope as old as time, but there's good news for sleep-deprived new parents too busy with diaper-changing and breastfeeding to make time for boning: The future might not be so sexless after all.

Recently, the U.K.-based mom YouTube community Channel Mum conducted a survey about how parents' sex lives changed shortly after having children. The national survey, which polled 1,118 families, found that 57% of couples said that contrary to the stereotype that parents' sex lives die after they have kids, their sex lives actually got better, not worse, after starting families. The study also found that 94% of parents said they were "satisfied with their sex lives."

"Which is true: the old legend that sex is just a chore that you do once you become a mom, and that men want it more than women; or is there a deeper story? That is the background for the research," Siobhan Freegard, the founder of Channel Mum, told Mic.

There are many old wives' tales and societal stereotypes suggesting couples lose their sex life after they have children. An image of a frustrated husband and a frazzled new mom saying "not tonight, honey" before going to bed comes to mind, with husbands then going on to achieve Don Draper-esque levels of extramarital sexual fulfillment.

It's true that parents' sex lives do change after having kids. The study found that there is an average waiting period from giving birth to having sex again: about 58 days after giving birth, according to those polled. And in between diaper changing and bottle feeding, the frequency of sex does diminish somewhat: Roughly three out of five couples (58%) reported having less sex after becoming parents.

"Frequency decreases because you have less time to yourself," Rose*, a 42-year-old mother of two, told Mic. "Taking care of your own children is very time-consuming, you feel like you have no time to yourself. In the evenings when the kids finally go to bed, it's like, I just want to have a little bit of time to myself."

The reality of postpartum sex was brought sharply into relief by Australian blogger Constance Hall, who wrote a viral Facebook post on Wednesday about the rigors of "parent sex."

"You know what parent sex is, it's that 3.5 minutes you get in-between changing nappies and making food, where you realize it's been almost a month since you banged and are starting to feel like flat mates, where your husband's seduction consists of one finger pointing towards the bedroom and the other hand on his dick," Hall wrote in the post, which has garnered more than 135,000 likes as of Friday.

Yet, while most couples find that while their sex lives change after having kids, that might not be such a bad thing. In fact, the Channel Mum survey found that 83% of couples said becoming parents made them focus more on the quality of their romantic encounters, rather than the quantity. Additionally, 45% of new parents said they felt "attracted and closer" to each other as a result of having kids.

"The quality can become better because you feel more connected to your husband after having children," Rose told Mic.

And there's good news for women concerned about their post-baby bodies: the survey also found that two thirds of men prefer their partner's post-birth fuller figure. "You're now the mother of their child. And they absolutely fancy you just as much if not more, because you've done this amazing thing," Freegard told Mic.

If you're a new parent concerned about whether or not you're getting enough nookie (or any at all, for that matter), there's an endless array of tips and online advice on how to maintain a sex life after having children. But Freegard said that to reignite your sex life, it's more important to take a step back and realize what brought you together with your partner in the first place.

"There's quite a large period of your life when you look at your children, whether they're new born babies or on their wedding day, and you just think, 'Wow, we did that. We made that person. We did that together,'" said Freegard. "And it's bloody hard work. It's exhausting, it's all of those things that you hear. But you share it together. You can't help but take a moment and say, 'We're fucking awesome, we made this.'"

And that can be an aphrodisiac in itself.