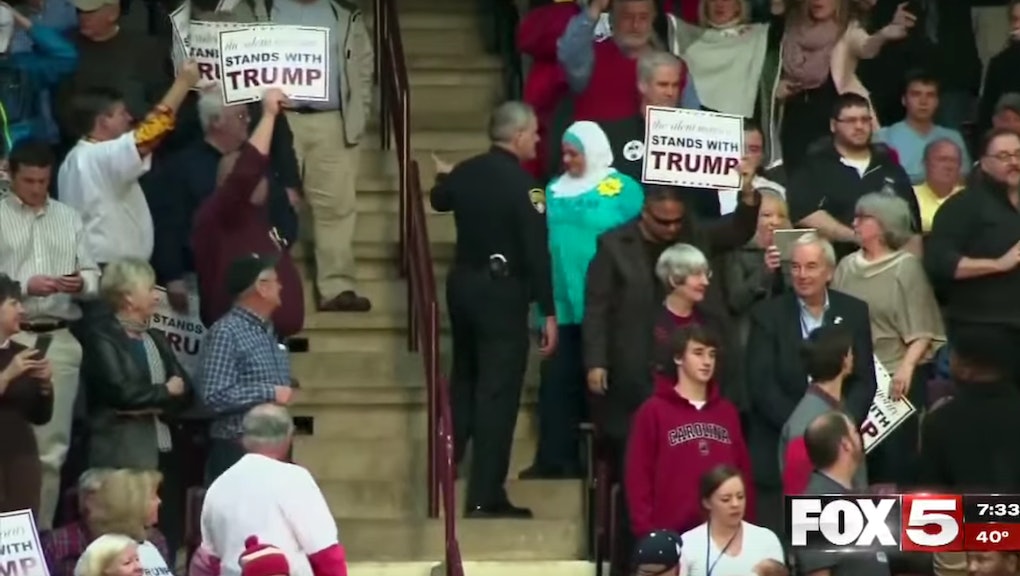 Donald Trump supporters rallied to throw a Muslim woman out of a rally for the 2016 Republican presidential frontrunner on Friday night for no apparent reason, CNN reports.

Rose Hamid, a 56-year-old flight attendant, attended the rally to "let Trump supporters see what a Muslim looks like." According to the CNN video, Hamid stood up while Trump was talking about Syrian refugees. Hamid was one of several protesters who wore yellow eight-pointed stars with the word "Muslim" on them. According to the Washington Post, some protesters' stars had the words "Stop Islamophobia."

Though Hamid said nothing when she stood up, people in the crowd turned against her and shouted at her until police escorted her out of the rally. People began to boo her, they signaled the thumbs-down to her and one person accused her of having a bomb.

"I have this sincere belief that if people get to know each other one-on-one, they'll stop being afraid of each other," Hamid told CNN.

Though Hamid told CNN that she believes people are decent, she also said that the rally's events are an effect of Trump's hateful rhetoric. She said that prior to Trump's rhetoric against Syrian refugees, people in the crowd were actually very welcoming to her.

"One woman reached over and shook my hand and said, 'I'm so sorry this is happening to you,'" Hamid told CNN.

The Council of American-Islamic Relations released a statement on the incident, the Hill reported. "The image of a Muslim woman being abused and ejected from a political rally sends a chilling message to American Muslims and to all those who value our nation's traditions of religious diversity and civic participation," said CAIR executive director and founder Nihad Awad.

Awad added, "Donald Trump should issue a public apology to the Muslim woman kicked out of his rally and make a clear statement that American Muslims are welcome as fellow citizens and as participants in the nation's political process."