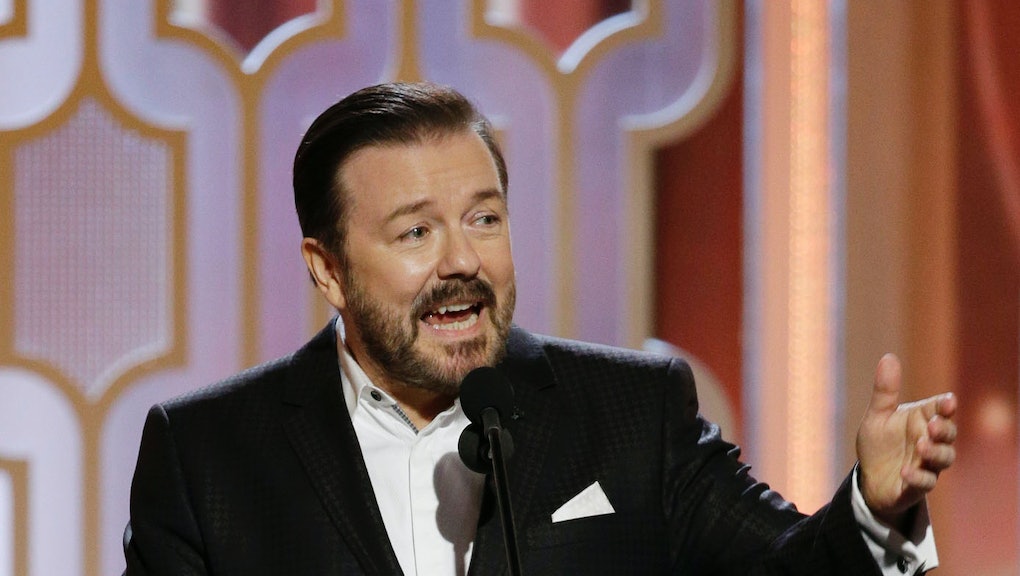 Ricky Gervais took time in his opening monologue between jokes about Caitlyn Jenner and Sean Penn to talk about equal pay. Unfortunately, he did it in the most awkward fashion possible.

Referencing Jennifer Lawrence's op-ed in Lena Dunham's newsletter about the pay gap, Gervais paid joking props. "Jennifer Lawrence made news when she demanded equal pay for women in Hollywood," he said. "There were marches on the street with nurses and factory workers saying, 'How the hell can a 25-year-old live on $52 million?!'"

That discomfort is something Lawrence herself alluded to in her op-ed. "It's hard for me to speak about my experience as a working woman because I can safely say my problems aren't exactly relatable," she wrote. However, she wrote the piece because she wanted to use that position of privilege to speak on a more expansive issue.

Gervais didn't stop with Lawrence, though. He moved on to talking about his pay versus Tina Fey and Amy Poehler's pay for hosting the show the previous three years. "I'm getting paid exactly the same as Tina and Amy did last year," he said. "No, I know, there was two of them. But it's not my fault if they wanted to share the money, is it?"

"It's funny 'cause it's true," he added. The "true" part of that, he's certainly not wrong about. Women do get paid significantly less than their male counterparts, just as in nearly every other industry. Additionally, there are fewer opportunities for women both in front of and behind the camera — despite the fact that movies about women do better at the box office.

Unfortunately, with such an inelegant messenger as Gervais, the smart ideas may have been lost in the shuffle. Watch the full monologue below.